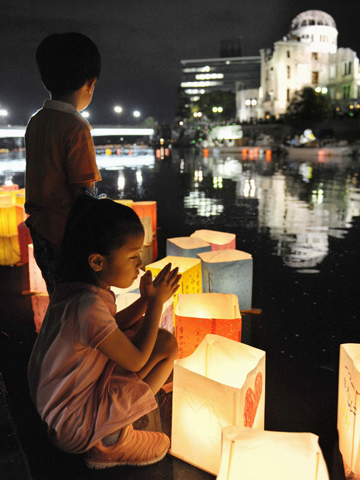 A girl prays after releasing a paper lantern Aug. 6, 2012, on the Motoyasu River facing the gutted Atomic Bomb Dome on the 67th anniversary of the bombing of Hiroshima, Japan. More than 75,000 people were killed in Hiroshima when the United States dropped the bomb near the end of World War II. (CNS photo/Kyodo, Reuters)

Seventy years ago, on Aug. 6, 1945, the single most destructive weapon ever unleashed upon human beings and the environment -- the atomic bomb -- was dropped by an American B-29 bomber on the Japanese city of Hiroshima, killing approximately 80,000 people instantly.

Three days later, a second atomic bomb was dropped on Nagasaki, immediately killing an estimated 40,000 people, with tens of thousands dying later from the bombings because of radiation poisoning.

Blessing the crews and their two missions was Fr. George Zabelka, the Catholic chaplain to the 509th Composite Group -- the atomic bomb group.

In a 1980 interview with theologian, peace advocate and later Catholic priest Charles McCarthy in Sojourners magazine, a Christian social justice and peace publication, Zabelka said during war, the destruction of civilians was always forbidden by the church.

"If a soldier came to me and asked if he could put a bullet through a child's head, I would have told him absolutely not. That would be mortally sinful," he said.

But in 1945 on Tinian Island in the South Pacific, where the atomic bomb group was based, three planes every minute would take off around the clock, Zabelka said.

"Many of these planes went to Japan with the express purpose of killing not one child or one civilian but of slaughtering hundreds and thousands of children and civilians -- and I said nothing. ...

As a chaplain I often had to enter the world of the boys who were losing their minds because of something they did in war. I remember one young man who was engaged in the bombings of the cities of Japan. He was in the hospital on Tinian Island on the verge of a complete mental collapse.

He told me that he had been on a low-level bombing mission, flying right down one of the main streets of the city, when straight ahead of him appeared a little boy, in the middle of the street, looking up at the plane in childlike wonder. The man knew that in a few seconds the child would be burned to death by napalm which had already been released.

Yes, I knew civilians were being destroyed ... Yet I never preached a single sermon against killing civilians to the men who were doing it. ...

I was "brainwashed"! It never entered my mind to publicly protest the consequences of these massive air raids.

I was told the raids was necessary; told openly by the military and told implicitly by my Church's leadership. To the best of my knowledge no American cardinals or bishops were opposing these mass air raids. Silence in such matters, especially by a public body like the American bishops, is a stamp of approval. ...

Look, I am a Catholic priest. In August of 1945, I did not say to the boys on Tinian, "You cannot follow Christ and drop those bombs." But this same failure on the part of priests, pastors and bishops over the past 1700 years is, I believe, what is significantly responsible for Hiroshima and Nagasaki and for the seemingly unceasing "Christian" blood-letting around the globe.

It seems to me that Christians have been slaughtering each other, as well as non-Christians, for the past 1700 years, in large part because their priests, pastors and bishops have simply not told them that violence and homicide are incompatible with the teachings of Jesus."

Zabelka said that 75,000 people were burned to death in one night of fire bombing over Tokyo. And hundreds of thousands were killed in Dresden and Hamburg, Germany, and Coventry, England, by aerial bombing.

"The fact that 45,000 human beings were killed by one bomb over Nagasaki was new only to the extent that it was one bomb that did it," Zabelka said.

Whether it's from one nuclear bomb or conventional bombs, bombs kill. Jesus did not teach us to kill, but to love everyone unconditionally -- even our enemies.

After years of soul-searching, Zabelka's complete conversion from a strong proponent of the "just war theory" to a total pacifist was announced in a 1975 Christmas letter to friends, stating, "I must do an about face. ... I have come to the conclusion that the truth of the Gospel is that Jesus was nonviolent and taught nonviolence as his way."

Zabelka dedicated the rest of his life to teaching, preaching and witnessing to Gospel nonviolence. He died in 1992.

In 1983, he and a Jesuit priest, Fr. Jack Morris, organized and participated in the Bethlehem Peace Pilgrimage starting at the nuclear submarine base in Bangor, Wash., and ending on Christmas Eve in 1984 in Bethlehem.

When Zabelka reached Maryland, I had the good fortune of hearing him personally share his inspiring story of conversion.

I strongly recommend reading Zabelka's entire Sojourners magazine interview and ordering from the Center for Christian Nonviolence the excellent DVD "Fr. George Zabelka: The Reluctant Prophet." Or simply click here to view it.

Love is the only remedy to the world's violent ills. In the end, the God of love, the God who is love, will unfold the fullness of his kingdom where all violence, all war, all injustice, and all sin have been conquered.

But for us here and now, we can either choose to rationalize and condone violence and war, or we can help God build his kingdom of life and love.

In the biblical book of Deuteronomy, the author lays out a divine ultimatum for humanity: "I have set before you life and death, the blessing and the curse. Choose life, then, that you and your descendants may live, loving the Lord, your God, obeying his voice, and holding fast to him."

May we always choose life!