Ignoring the suffering of a nation 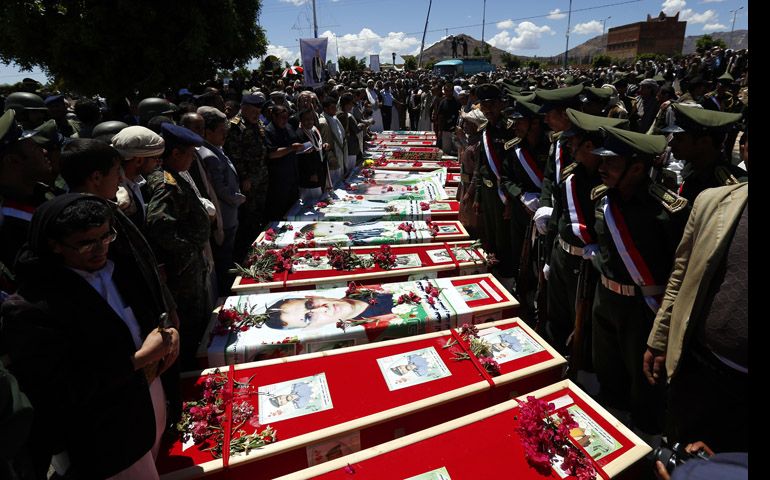 Yemeni mourners gather beside the coffins of the victims of suicide attacks during a funeral in Sana'a, Yemen, March 25. (CNS/Yahya Arhab, EPA)

While much needed attention is being given to refugees flowing from war-torn Syria, one desperately suffering Middle East nation is barely a blip on the developed world's radar screen.

And to be honest, Yemen wasn't on my radar screen either, until I met Barbara Deller.

For 12 years Deller worked as a hospital nurse-midwife in Yemen, and later served as a faculty member of the Johns Hopkins University School of Public Health, advising ministries of health in numerous countries in Africa and Asia and the Middle East.

She explained to me that Saudi Arabia's military campaign against the Houthi rebels in Yemen has greatly increased the suffering of this already desperately impoverished nation of 27 million people.

Earlier this year, when Houthi rebels took control of Yemen's government, an Arab coalition led by Saudi Arabia attacked the Houthis because they claimed the Houthis are backed by Iran -- Saudi Arabia's archrival.

With U.S. and British support, Saudi Arabia has been pounding Yemen for the last several months with ongoing airstrikes; and is suffocating Yemen with a crippling air, land and sea blockade.

Sadly, as is always the case with war, masses of innocent children, women and men are bearing the brunt of untold suffering.

Deller said, "My personal contacts in Yemen include a young woman in Sana'a [Yemen's largest city] who has three small children and is due to deliver any day now. She has little food and water.

"She said as the intense bombardment starts in the evening she lies with her children in the dark, and she used to pray that God would protect her and her family.

"Now she says she prays that God will let the next bomb kill them all as it is so excruciating waiting for a bomb to hit.

"If she has any problem while giving birth, she could easily die, as the one maternity hospital in the city has been bombed.

"All of her neighbors have fled the residential area, but they have no money and no place to go."

Reportedly, even before the war, about half the population lacked access to clean water, and the country imported 90 percent of its food from abroad. But in the last several months the ongoing Saudi-led airstrikes, along with its blockade, has pushed Yemen into a full-fledged humanitarian disaster.

In June, the United Nations raised Yemen's crisis status to Category 3 -- its most severe level, shared only by Syria, South Sudan and Iraq.

In support of the plea of several nongovernmental aid agencies for a cease-fire, and the lifting of the blockade in Yemen, please email and call (202-456-1111) President Obama urging him to pressure Saudi Arabia and its coalition members to immediately enact a total ceasefire in Yemen, and to quickly lift its blockade allowing a free-flow of all humanitarian aid into Yemen.

To learn how you can further assist those suffering in Yemen, you can check out the website of Save the Children.

Yemen's Country Director for Save the Children, Edward Santiago, said "Children are bearing the brunt … not only have they been killed during airstrikes and fighting, but the homes, schools and hospitals they rely on have been damaged or destroyed. Many families don't have the food, fuel or medicine they desperately need to survive" as a result of the blockage.

As believers in the God of peace, how can we possibly ignore the suffering people of Yemen?

World | Ignoring the suffering of a nation

As elections approach in Somalia, bishop sees signs of hope

Sisters in Mexico welcome migrants daily to the 'dining room'