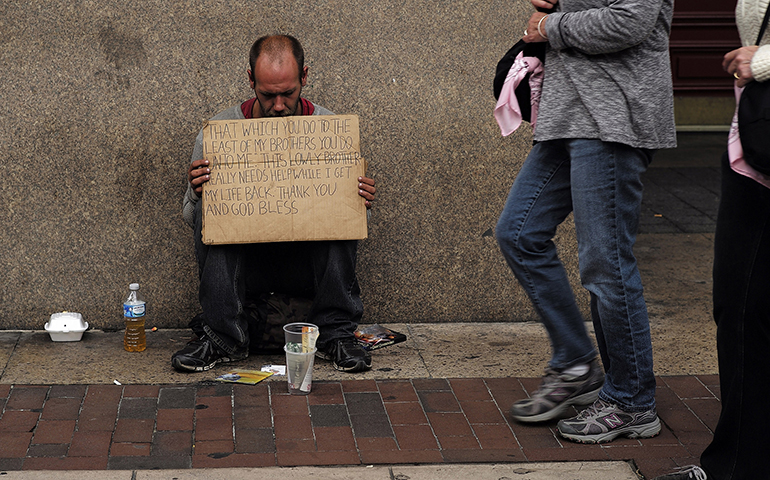 During this month of political conventions, when America's two major parties adopt platforms designed to further their particular goals, it is clear that neither party's goals reflect a genuine, total commitment to God, all of God's people and all of God's creation.

While the rich receive huge tax breaks and corporate welfare continues, the poor, the vulnerable and the earth are given little attention and receive token assistance.

What is desperately needed is a people's platform.

But where do we go for guidance in formulating a solidly moral platform that honors God and thus respects all people and all creation?

First, we break open the Gospel to prayerfully absorb what Jesus taught by word and action. He, and his word, must be our rock-solid foundation. Otherwise we build our house on sand.

Jesus is the ideal model for us; the perfect example of how to truly love.

His loving life taught us to protect the life and promote the dignity of every single human being. This means no one, absolutely no one, is expendable.

From the first moment of conception to natural death, we must value and protect all life. For in the words of St. John Paul II, "We are all really responsible for all."

And those most in need must come first. Instead of giving them minimal token attention, they deserve extra special care. It's what Catholic social teaching calls a preferential option for the poor and vulnerable.

Therefore, a political platform for all the people must insist that poverty in the U.S. and throughout the world be totally eradicated.

As a wealthy nation, the U.S. cannot excuse the sad fact that approximately 47 million of its people live in poverty.

Tonight, and every night, 300 million of the world's children will go to bed hungry according to the United Nations Children's Fund. Indifference to this tremendous suffering is not compatible with a truly lived Christianity. This should prick our consciences into action!

Everyone deserves adequate and nutritious food, clean water and sanitation, a decent dwelling, humane working conditions with a living wage, basic education, quality health care, and security when old or disabled. That's what St. John XXIII taught us in his encyclical Pacem in Terris ("Peace on Earth").

Jeffrey Sachs, special advisor to U.N. Secretary-General Ban Ki-Moon, explained to me that for an additional approximate $100 billion dollars annually in poverty-focused development aid, extreme poverty could be completely eradicated from the face of the earth. This $100 billion, he said, could easily be transferred from the huge U.S. military budget.

Not only is ending poverty the morally right thing to do, but also imagine the good will it would generate throughout the world -- creating the soil in which the seeds of true peace could grow. Blessed Paul VI famously declared, "If you want peace, work for justice."

And even with this $100 billion cut in military spending, the U.S. would still be allocating more money for its military than the combined military budgets of the next six nations.

By closing tax loopholes enjoyed by rich individuals and corporations, the U.S. could bring in well over $100 billion annually in new tax revenue to repair the nation's infrastructure, build schools and health clinics, and create millions of good jobs in the process (learn more here).

A political platform for all the people of the earth would make it an absolute priority to abolish all nuclear weapons, completely end the arms trade, engage in a multilateral effort to disarm all nations, and in the words of the world's Catholic bishops at the Second Vatican Council "strain every muscle in working for the time when all war can be completely outlawed by international consent."

The near unanimous scientific consensus affirms that the world is dangerously warming -- causing increasing floods, droughts, wildfires and superstorms. And that this warming is generated primarily by the human burning of fossil fuels.

Therefore, a people's platform must insist that fossil fuels remain in the ground and that clean renewable sources of energy like wind, solar and geothermal be put on the fast track.

Finally, a platform for all the people cannot morally justify, for any reason whatsoever, the murder of its most vulnerable persons -- unborn babies. Such a platform must be deeply committed to completely ending abortion nationally and worldwide as soon as possible.

For in the words of Blessed Mother Teresa "Any country that accepts abortion is not teaching its people to love, but to use violence to get what they want. That is why the greatest destroyer of love and peace is abortion."

For such a platform best reflects Gospel love.

As stated in the closing words of the Pledge of Allegiance, may the United States truly become "one nation under God, indivisible, with liberty and justice for all."