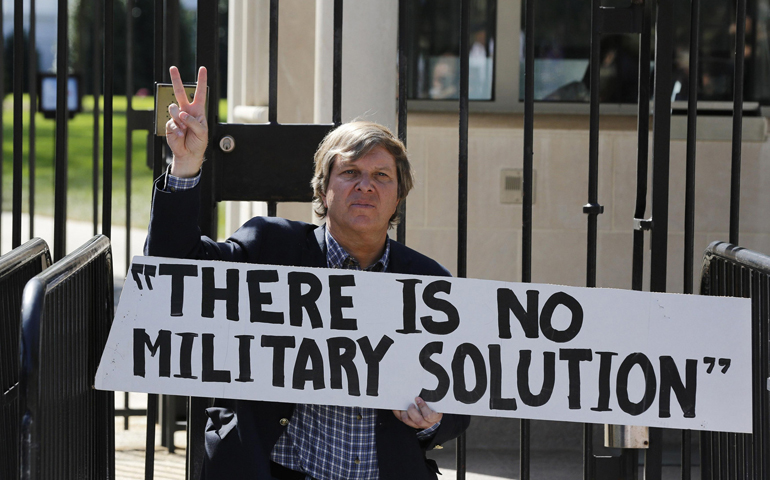 Fr. John Dear protests Sept. 23 at the entrance to the White House in Washington. (CNS/Reuters/Larry Downing)

True respect for life requires us to get out of our comfort zone.

Oh, we might say, "I respect life, I vote for 'pro-life' politicians who claim they will work to end abortion." However, in a democracy, voting is usually easy and comfortable.

But are we willing to regularly stand outside of an abortion mill on a freezing winter morning or hot summer afternoon praying and witnessing to the humanity of our unborn brothers and sisters? That's harder and somewhat uncomfortable.

Now for those who are willing to get uncomfortable in support of the Catholic church's efforts to protect unborn human life, try to move into an even more uncomfortable zone: Acknowledge the truth that war does much to disrespect life. War kills life -- mostly innocent life.

Blessed Mother Teresa insightfully said, "The greatest destroyer of love and peace is abortion, which is war against the child. ... Any country that accepts abortion is not teaching its people to love, but to use any violence to get what they want."

But Mother Teresa's quote can logically and honestly be turned around to say that war also is the greatest destroyer of love and peace. Like abortion, war is also against the child. Any country that accepts war is not teaching its people to love, but to use any violence to get what they want.

Pope Emeritus Benedict XVI said, "It is impossible to interpret Jesus as violent: violence is contrary to the Kingdom of God, it is an instrument of the antichrist. Violence is never useful to humanity but dehumanizes it."

Now let's put the shoe on the other foot. Perhaps you say, "I respect life. I vote for politicians who say they will work to end war, war preparation and the military industrial complex." Again, in a democracy, voting is generally easy and comfortable.

But are we willing to peacefully, prayerfully and publicly witness to the evil of war and war preparation? And are we regularly contacting our legislators?

Now for those who are willing to get out of their comfort zone in support of the Catholic church's teaching against violence and war, try to move into an even more uncomfortable "respect life" zone: Acknowledge the truth that abortion disrespects life.

Over the years, I have talked with many "pro-life" advocates for unborn babies who don't think twice about bombing their enemies, often not knowing or caring that many of the victims are innocent, vulnerable born babies and children.

And I have come across numerous advocates for peace who are committed to ending war and war preparation and yet who argue for the so-called right to choose an abortion, the violent dismembering of an unborn baby.

There is a very serious moral disconnect here. And this moral disconnect also sadly happens with all of the other grave social justice issues facing humanity, like poverty, hunger, sweatshops, immigration and refugee reform, climate change, the death penalty, euthanasia, and embryonic stem cell research.

As followers of the God of life, justice and peace, we need to connect all of the moral dots and do whatever we can to make a difference.

For, as St. John Paul II said, "We are all really responsible for all."