The shameful secret cost of many Christmas toys 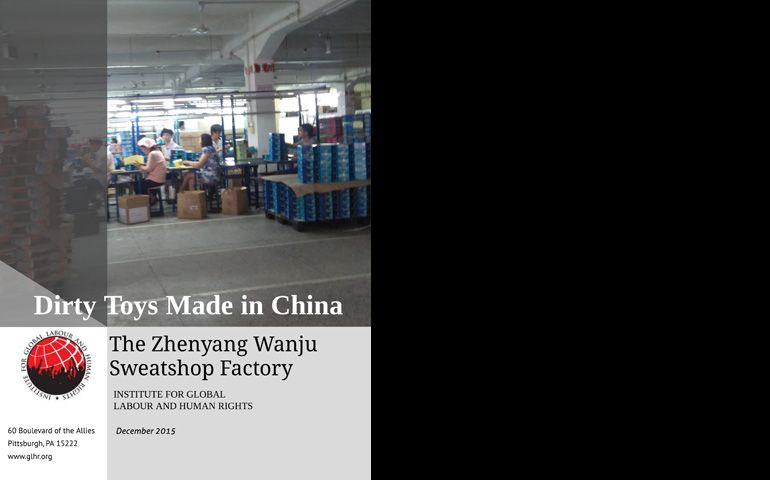 Seeing Christmas toys under the tree, unwrapping them with excitement, and playing with them for many days to come is a delightful experience for many children throughout the world!

But seldom do we think of where the toys came from, who made them, and under what conditions were they made.

Thankfully, the Institute for Global Labour and Human Rights (IGLHR) has painstakingly asked, and answered, many of these questions.

In its investigative report "Dirty Toys Made in China," IGLHR reports that the Dongguan Zhenyang Wanju Limited toy factory in China employs "over 1,000 regular employees and 800 temporary and student workers, many of whom are just 16 years of age" -- in near freezing conditions, for wages as small as $1.36 an hour.

The workers mainly produce Christmas toys, dolls and baby toys for Disney, Hasbro, Mattel and others companies in the U.S., Europe and Australia.

Workers at the Zhenyang toy factory are forbidden to move from their work areas, and can't even stop to take a drink of water. And because noise levels are extremely high in some departments, longtime employees have suffered hearing loss.

Researchers for IGLHR report that Zhenyang's production departments are in constant fast motion. Quota pressures are tremendous. Workers said that "both hands must be moving constantly."

The quota for a team of 36 workers making toy cars is 11,000 pieces per day. This means in essence each worker must make 306 toys per shift.

One worker told IGLHR she had to produce 2,400 Disney doll legs in a day. She said, "You can't take your eyes off it for a second."

In the paint and printing work rooms, which are filled with chemical fumes including industrial alcohol, phenylenediamine, and sodium peroxide, workers are denied air filter masks, causing some to feel nauseous and dizzy.

And after toiling at least 12 hours a day in these inhumane conditions, workers must sleep on narrow bare wooden bunk beds in crowded dorms.

According to IGLHR, contacts on the ground report an upsurge of labor activists being rounded up and jailed. While some have "disappeared."

Please go to this IGLHR link and click each of the seven toy companies listed, to send a pre-written letter to each company expressing your concern regarding the terrible injustices experienced by workers laboring to make their Christmas toys. It takes less than five minutes to send a message to all seven companies.

The Compendium of the Social Doctrine of the [Catholic] Church insists that "Labor has an intrinsic priority over capital." People are more important than money.

The compendium further states (quoting from St. John Paul II, Encyclical Letter Laborem Exercens ), "...there is an urgent need to create economic systems in which the opposition between capital and labor is overcome." But sadly to the contrary, "Scientific and technological progress and the globalization of markets, of themselves a source of development and progress, expose workers to the risk of being exploited by the mechanisms of the economy and by the unrestrained quest for productivity."

An excellent way to begin to stop this worker exploitation is to hold companies like Disney, Hasbro and Mattel accountable for these abuses -- which place astronomical profit above basic human rights.

Justice | The shameful secret cost of many Christmas toys