During journeys of peril, the 'everlasting arms' are God's alone 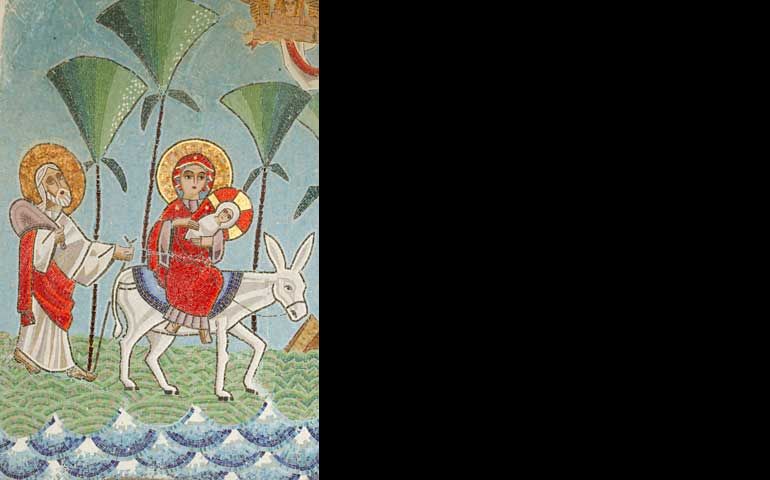 The Holy Family's flight into Egypt is depicted in a mosaic at the Syrian Monastery in Wadi Natrun, Egypt. (Newscom/BSIP)

"The Night of the Hunter," released in 1955, is one of my favorite Christmas movies. The flight into Egypt is there in the two children floating down the river, their mother murdered and her killer hunting them. The children's lives are incidental, though he intends to take them. For they have something their hunter wants: stolen cash, sewn, unbeknownst to the children, into the little girl's doll.

The children neither know what they carry nor how it has marked them. Their very innocence is a burden and a danger. They are small, and they are adrift in dark water. Evil stalks the riverbank, watching and waiting. The children come ashore at the home of an older woman who has a habit of taking in strays. Children of various ages, whose stories we never learn, but whose losses are clear, live there. As the woman observes, "It's a hard world for little things."

She welcomes these lost children and teaches them and loves them and watches over them through the night. She is very like the description of God in Isaiah 31:5:

Like hovering birds, so the Lord of hosts shall shield Jerusalem,
To shield and deliver, to spare and rescue.

The killer tracks the children to their shelter. He knows where they are and the caretaker within knows where he is. In a climactic scene, the killer stands outside the house all night long. Inside, the old woman is sitting in a rocking chair, a shotgun across her lap, watching the darkness. Only the children sleep.

The killer, who presents himself as an itinerant preacher, has gifts to woo and win his victims. He is handsome, and he knows how to preach. He knows how to sing. Standing in the darkness he begins to croon this old hymn:

They are both leaning on something, someone, as all of us must. But in the darkness and in the singing, we come to understand that the killer believes the everlasting arms to be his own. He has gotten everything he ever wanted through brute strength, strong arms, hands that knife and strangle and destroy. He is his safety and security from all alarms. And if he can find his way into the house -- for she cannot watch every approach -- nothing will stop him. He will overpower the woman, take her gun, and turn it on everyone there.

The old woman, small and alone, is leaning, too. She is leaning on Jesus, always Jesus, ever Jesus, only Jesus.

I cannot watch this scene without thinking of Herod, sitting in his palace while his soldiers hunt for the child who has something Herod wants. Word has come of a true king, an expected king, a king chosen by God to rule over Israel, a child king. Visitors have come from the east in search of the child. There is talk of shepherds leaving their fields in search of the child. It is said they follow a star that leads them to the infant.

Does the child know what he bears or how it has marked him? Like Moses before him, he has been cast into dark waters, while evil stalks the riverbanks, watching and waiting.

Like the killer in "The Night of the Hunter," Herod, too, leans on "everlasting arms." They are the arms of Roman might and soldiers and chariots and horses. He has gotten everything he ever wanted through brute strength, destroying even his children when they threatened his power. What is some stranger's child after Herod has murdered his own?

But there is another voice in the night, the voice of the angel that warns Joseph: "Rise, take the child and his mother, flee to Egypt, and stay there until I tell you. Herod is going to search for the child to destroy him."

Joseph and Mary are also leaning. They are leaning on God and listening to God's words. They wrap the child and set off. They shield this New Jerusalem, "shield and deliver ... spare and rescue."

Many of the traditions that come out of that journey are small and domestic. There is the story of the family stopping alongside a stream to do some laundry. Mary hung their wet clothes on a sweet-smelling bush. It is said that God honored the bush, which we know as the rosemary, for its service by granting its blossoms the blue of Mary's robe.

There is another story that the Holy Family hid from Herod's soldiers in the hollow trunk of an old pine tree. The tradition holds that the trunk lowered its branches to conceal the three. Some say that, if you cut a pinecone in half, you can still see the imprint of Jesus' hand raised in blessing to their protector.

These are stories of help needed and help sought, of the whole created world uniting to assist Mary and Joseph and the child on their way. Like the old woman, that unlikely defender in "The Night of the Hunter," other unlikely defenders reach out their weak arms, one after another, "to shield and deliver, to spare and rescue." The "everlasting arms" are not their own. They belong to God alone.

As I write, the talk is of arms. People, I'm told, are stockpiling guns against a coming danger. There are rumors of riots and rebellion. I turn again to the hymn and hear it through the old woman's high, sweet voice:

[Melissa Musick Nussbaum lives in Colorado Springs, Colo. More of her work is at thecatholiccatalogue.com.]

Spirituality | During journeys of peril, the 'everlasting arms' are God's alone

Stopping to smell the flowers in East Africa