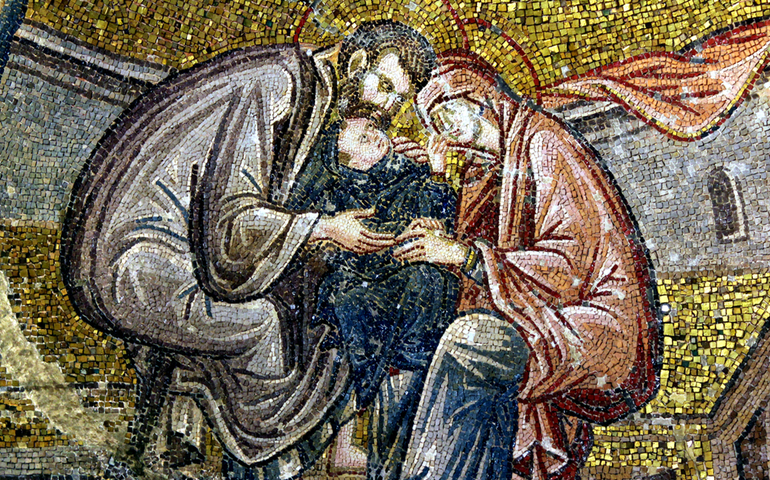 The Virgin Mary held by her parents, Sts. Joachim and Anne, depicted in mosaic in Chora Church in Istanbul (Wikimedia Commons/Till Niermann)

Our 5-year-old grandson, Clement, is in pre-K at his neighborhood Catholic school, which, apparently, qualifies him to explain Christian belief to his 2-year-old sister, Ruthie. He told her, "Ruthie, we believe in three Jesuses: Father, Son and Holy Spirit. And the Spirit's the best one cause it's holy."

Clement and Ruthie's parents aren't sure just how she is receiving or understanding the theology lessons, complicated as they may be by a family read-aloud of The Hobbit. Our daughter reports that Ruthie wanders around the room during the reading, occasionally calling out a word or phrase she hears and savors saying aloud. Lately she's been running through the house shouting, "Hosanna in the hobbit!"

I can't wait to hear Clement's take on the Immaculate Conception.

We're awaiting the birth of our 11th grandchild early this Advent, just before that Marian feast. One of the things I love best about December 8 is the earthiness of it. (That got your attention, didn't it? Seeing as how the feast is usually served up as a theological meringue, all white sugar and air.)

The Feast of the Immaculate Conception probably began in the Eastern Church as a celebration of St. Anne, Mary's mother, a feast that is still kept in the East. Since at least the seventh century in the west we've made St. Anne's feast into a celebration of Mary's conception, the first of the two surrounding her birth. And though you likely won't hear this directive from the pulpit, just do like your mother did and count the months on your fingers. You'll see that there are nine months between December 8, when we celebrate Mary's conception, and September 8, when we celebrate her birth on the Feast of the Nativity of the Virgin Mary. Most preachers stress the immaculate part of the feast, the part that is God's courtesy to the woman who will bear God in her womb. But the liturgical calendar, with its nine-month spread between holy days, doesn't ignore the everyday human part of the everyday human miracle, which is Mary's very human conception. The timing of the feasts anchors them in December to the early weeks of nausea and vomiting, and in September, to the leg cramps and backaches of the final weeks.

Mary was conceived by Anne and Joachim, a couple who, according to the tradition, had waited and prayed a long time for a child. They grieved their inability to get pregnant. Theirs was a grief known by men and women in all times and all places. It is a grief couples bear during this expectant season of Advent.

What do I mean by the courtesy of God? The church teaches that Mary is immaculate, or without sin, from the moment of her conception. She is not without sin because, like Jesus, she is divine, but because God chose to give that gift of grace to her. God gave Mary the gift she would need to bear and raise the Christ. But the gift Mary is given is not so different from the gift we are all offered in baptism. Look at the rite of baptism for children: We are freed from sin and brought to new life. We are anointed with the chrism of salvation, so that, united with God's people, we may remain forever a member of Christ, who is Priest, Prophet, and King. We are clothed in Christ. We are called always to walk as children of the light, the flame of faith alive in our hearts.

What, then, is the difference between Mary and the rest of us? With any gift there is a giver and a recipient. The giver offers the gift. The recipient's task is simple, to either accept or reject the gift. Mary says, "Yes." With her whole being, she says, "Yes."

Mary is so filled with the abundance of God's gifts that there is no room in her body, in her mind, or in her heart for sin. In a twist on Luke's explanation that Jesus was born and "laid … in a manger, because there was no room for them in the inn" (Luke 2:7b), in the inn that is Mary's body there is abundant room for Christ, but none for sin.

Eve is the mother of all the living. Mary comes to us as the new Eve, the Eve whose "yes" to God undoes and unravels the tangled threads of Eve's "no" to God. May Mary's "yes" become our own. May the inn of our bodies become a place with room for Christ, where the Lord of all is welcomed and adored.