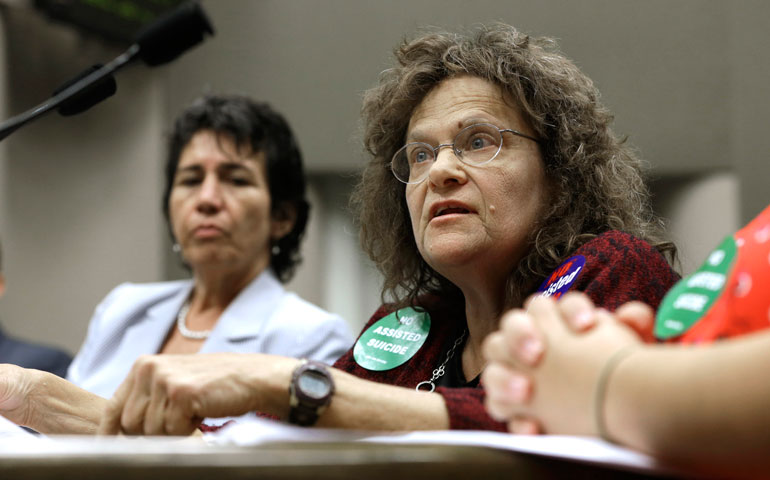 We hosted our 10-year-old granddaughter and one of her friends for a Friday night sleepover. Once the girls got on their pajamas, they wanted to settle down and watch a movie. I suggested "Arsenic and Old Lace," the 1944 comedy starring Cary Grant as Mortimer Brewster, the sole sane and law-abiding member of his family.

His crazy maiden aunts serve lonely old men poisoned elderberry wine, thus putting the gentlemen out of their misery. And then there are Mortimer's brothers: One thinks he's Teddy Roosevelt building the Panama Canal and the other is a criminal who is a dead ringer for horror film star Boris Karloff.

"Arsenic and Old Lace," an old movie when I first saw it, is an ancient relic for these 21st-century girls. They don't recognize Grant or Karloff, so neither actor is a draw. But what really confused them was hearing me call the movie a comedy.

My granddaughter's friend said, "I don't think we want to watch a movie about two old ladies who poison people."

I showed them the picture on the DVD box, the two Brewster aunts all lace collars, cameo brooches and befuddled smiles. I wanted them to see how everything about the women suggested a kind of laughably sweet confusion.

Nothing doing. No sweet old ladies poisoning the wine.

After I went to bed, I lay awake thinking about "Arsenic and Old Lace," and how something I find so amusing could seem so sinister to these girls. I realized my approach to the movie was shaped by a cultural context very different from the one in which the girls are growing up. Because I remembered: That Friday was the day the California State Senate passed "right-to-die" legislation based on legislation passed in Oregon in 1994.

I encountered the movie in a world in which old people were often indeed lonely. Sometimes they were neglected or mistreated, but there was no organized movement to have them euthanized, either by their own hands or at the hands of others.

We accepted, as a given, that we were all going to shuffle off to glory, but no fair pushing. To kill someone because you decided her life was miserable was, well, crazy.

That's not the cultural or legal context in which these girls are growing up. My granddaughter's friend is the oldest of seven children. One of her siblings is severely disabled. She has heard the remarks of people who think his life is a burden neither she nor her parents should have to bear.

The legislation that passed -- on the day I was pushing a comedy about killing old men -- requires that two physicians see the patient and concur that death is imminent, no more than six months away.

Sponsors of the bill, which Gov. Jerry Brown signed into law on Oct. 5, argue the patient is in control, "from beginning to end." Forty-eight hours before taking the deadly medication, a patient must sign a statement that she is of sound mind and capable of taking the medication on her own. No one, the bill sponsors contend, will be allowed to pressure the patient or override her wishes.

As they get older, the girls may find out how those same safeguards have worked in Holland, where an 80-year-old dementia patient's death was ordered by a Dutch court, against her doctor's counsel that she was unable, as the law requires, to consent.

How did the Dutch woman's case reach the court? When her doctors refused to euthanize her, the woman's family sued to bypass the consent laws. The court agreed, issuing an order for the woman to be transported to an "end-of-life clinic," where she was put to death.

From 2006 to 2013, there was a 151 percent increase in Dutch deaths by euthanasia. In 2013, that meant one in every 28 Dutch deaths was the result of euthanasia. And no doctor there has to certify that death is imminent. As Winston Ross, the author of Dying Dutch: Euthanasia Spreads Across Europe, wrote in the Feb. 20 issue of Newsweek:

The Dutch don't require proof of a terminal illness to allow doctors to "help" patients die. Here, people can choose euthanasia if they can convince two physicians they endure "unbearable" suffering, a definition that expands each year. Residents here can now choose euthanasia if they're tired of living with Lou Gehrig's disease, multiple sclerosis, depression or loneliness. The Dutch can now choose death if they're tired of living.

This summer, a Belgian court granted a physically healthy 24-year-old woman with severe depression the right to kill herself under a doctor's supervision and with the doctor's cooperation.

My mother lived with my husband and me for the last years of her life. By the time she died, her dementia had left her helpless and difficult, a terrible combination. Her care was expensive, onerous and exhausting. I understand the weariness of the Dutch family.

So I am grateful for a church that said to me, "You might want her to go ahead and die, but you may not be death's agent." That teaching became a sturdy wall against which I could lean when I had no more strength to stand.

Who is protesting these laws in our country? Often, it is the disabled, who know how expensive, onerous and exhausting their care can be, for both themselves and their caregivers.

According to Marilyn Golden, a senior policy analyst with the Disability Rights Education and Defense Fund, "right-to-die" laws could potentially let insurance companies coerce vulnerable people into stopping expensive and labor-intensive treatments in favor of a quick and cost-saving death. "If insurers deny or even delay a person's life-sustaining treatment, they are being steered toward hastening their death," she said. "Do we really think insurers will do the right thing or the cheapest thing?"

So, girls, I get it. When the majority of the California Assembly, the Oregon, Washington and Vermont legislatures and many Dutch and Belgian judges are all Mortimer Brewster's aunts, it's no longer a comedic farce.

It's real life, and it's scary.

[Melissa Musick Nussbaum's online column for NCR is at NCRonline.org/blogs/my-table-spread. More of her work is at the catholiccatalogue.com.]

A version of this story appeared in the Oct 23-Nov 5, 2015 print issue under the headline: Poisoned elderberry wine is no longer a comedic farce.