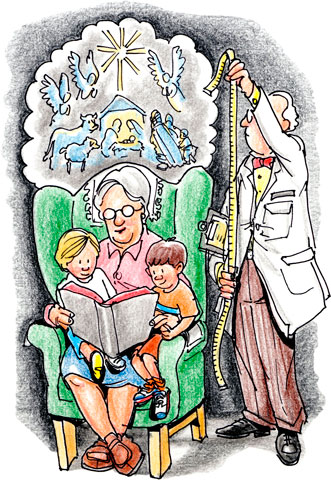 You may have read the spate of articles about "Judgments About Fact and Fiction by Children From Religious and Nonreligious Backgrounds," a study published in the July issue of Cognitive Science. My favorite was from BBC News with this portentous lead: "If you expose your child to Moses, Muhammad or Matthew the Apostle, are they at a disadvantage?"

Sixty-six kindergarteners from both public and parochial schools in the Boston area were chosen for the study. The children were presented with three kinds of stories -- religious, fantastical, and realistic, in the words of the study -- and asked to differentiate between fact and fiction. The first curious assumption is that fact equals "realistic," which equals "true," while fiction equals religious or fantastical (take your pick), which equals "false."

And that leads us to ponder facts, like the female Hollywood stars who remain childless for decades, only to conceive and bear children in their late 40s and 50s. While a famous fictional female, Cinderella, whose fairy godmother turned a pumpkin into a functioning conveyance, is a lie. Reasonable people -- those not exposed as children to Moses, Muhammad or Matthew the Apostle -- know you can't get to the ball in a pumpkin, however pimped the ride. Besides which, there's no such thing as a fairy godmother. Or, apparently, menopause.

By facts, of course, the researchers mean what we can see and touch and measure. It's what we have come to call "science," as divorced from imagination and philosophy. Or, of course, theology. We can't begin to think of the creation by working from what has been revealed about its Creator, because what humans have learned about the Creator falls into the category of religious stories, and so, fiction, and so, falsehood.

Science, we think, is untouched by personal experiences or cultural norms or political affiliation or peer pressure. It is "objective," which, if I might be so bold, is a "fantastical" notion if ever was. The belief, and belief it is, is that if we can examine a thing under a microscope, it is fact. If we can only imagine it, it is fiction, and therefore, suspect and relegated to the world of fairy tales.

Even though much of what we now include in the realm of facts (flying machines and thin wires conveying sounds and images across time and space and men not in, but on, the moon) began in the realm of the fantastical.

Even though what was once held as fact, namely that people of certain races and continents were born to be owned by people of other races living on other continents, was overturned by people fed on and formed by religious stories. Like the 18th-century English Rev. John Newton, a former slave trader turned fervent Christian, who preached against the slave trade and slavery and understood his own awakening to its horrors to be the direct result of what he read in the Bible. He could ascribe the change only to divine intervention, a miracle of God's "amazing grace that saved a wretch like me." And saved others, as his preaching led legislators like William Wilberforce to outlaw the British slave trade.

Newton's fervor, based in what the researchers in the study call "religious stories," or fiction, would, they argue in the effects of such stories on children, lead to "a more generic receptivity toward the impossible, that is, a more wide-ranging acceptance that the impossible can happen in defiance of ordinary causal regularities."

For which, we fervently pray.

May there be "a more generic receptivity toward the impossible," that men and women might return good for evil and forgiveness for hate "in defiance of ordinary causal regularities."

May there be an outpouring of "a more generic receptivity toward the impossible," that people "shall beat their swords into plowshares and their spears into pruning hooks," all "in defiance of ordinary causal regularities."

May "ordinary causal regularities" roll away like the stone from Jesus' tomb, as the lowly are lifted up and the hungry are filled with good things.

I see the results of "ordinary causal regularities" in the streets of Ferguson, Mo., and on a mountain in northern Iraq. We know the underlying causes of these conflicts and the ways in which these elements connect, like a net in which a hapless fly is caught and killed. Perhaps someone who has heard the story of a love that triumphs over death can imagine a better way.

It was G.K. Chesterton who made the best and boldest defense of fairy tales, of the fantastical, when he wrote:

So if you want me, I'll be where I've been for most of the past 40 years, telling children stories: of a bush that burns but is not consumed, and of seas that part so slaves can cross over to freedom, and of a hungry lion whose mouth is shut by the hand of God. I'll be telling them about a baby born beneath the brightest star that ever shone and about the animals that, on that night, could talk. I'll be telling them about water turned into wine and hate turned into love and death turned into life.

I'll sing the stories and speak the stories and sometimes act them out. And they will be rapt, these children who know there are dragons, joining me in glorious "receptivity of the impossible," that, one day, the dragons may be slain.

[Melissa Musick Nussbaum lives in Colorado Springs, Colo. More of her work can be found at http://thecatholiccatalogue.com.]

A version of this story appeared in the Sept 12-25, 2014 print issue under the headline: For receptivity to the impossible, we fervently pray.