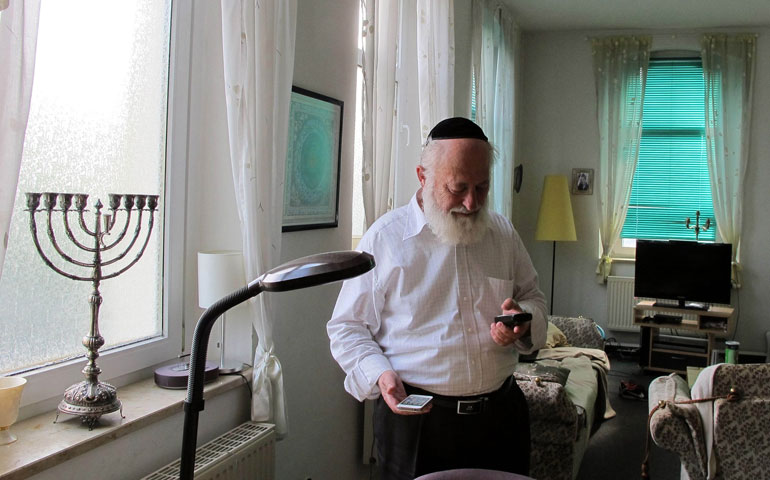 Recall the case of the parents who took their 15-month-old to a Michigan Applebee's. The parents ordered apple juice for their child. The server mistakenly brought a margarita. The child drank some of the liquor before the parents realized the mistake. They sued the Applebee's chain.

Bringing a lawsuit means the plaintiffs -- in this case, the parents -- ask the government -- in its judicial branch -- to rule that the behavior of the server, as an agent of the Applebee's chain, is so serious, and so seriously wrong, that the government will impose a judgment on the restaurant and its owners and shareholders.

Every Sunday, children -- and in the case of Orthodox churches, baptized infants -- are offered wine to drink.

Why is no one suing the Catholic churches, Roman and Eastern, for serving alcohol to a minor?

Religious bodies, in contrast, have constitutional protection by the government, from the government. Congress shall make no law, the first amendment reads, prohibiting the free exercise of religion.

Exercise is an interesting word because it presumes action. Religious freedom does not simply mean the freedom to think, a power, one presumes, even the most oppressive regimes cannot hold over their citizens.

Exercise means the work -- of keeping holy days and seasons, of regulating food habits and sexual practices, of determining which texts are sacred and which are not and who may proclaim them, teach them and preach them -- particular to each religious body.

Communion is central to Catholic life. From the earliest days of the church we have been the people who gather on Sunday to receive the bread and wine that become for us the body and blood of Christ. It is an exercise of our religion, and so is protected by the constitution.

As ancient as is our practice of Communion, the Jewish practice of male circumcision is more ancient still. It is the hallmark of identity for Jewish males. To be a Jewish man is to be circumcised.

And in Hasidic, and other ultra-Orthodox Jewish congregations, the ritual includes metzitzah b'peh, a practice in which the mohel, the Jewish ritual circumciser, uses his mouth in a split-second action to suction the blood from the wound. The mohel, whose mouth is filled with wine, then spills the wine from his mouth over the wound.

On Sept. 13, the New York City Board of Health passed a regulation requiring "written informed consent" from parents before an infant can be ritually circumcised by a metzitzah b'peh-practicing mohel. Since the parents, and other family and friends are present at what is a liturgical (that is, public work) of the community, one wonders why this consent is necessary. Doesn't the presence of the family and faith community imply consent?

There are a number of issues here. Public health officials are concerned that oral contact creates a risk of transmitting herpes, a virus that can kill infants. Here are the statistics the New York City Department of Health cites: It learned of 11 herpes case between 2004 and 2011 (or an average of around one and half cases a year) it said are "associated with" the practice of metzitzah b'peh.

Two of the 11 cases resulted in death and two other babies suffered brain damage from the infection.

Compare this with 2010 policy statement from the American Academy of Pediatrics on the dangers of choking among children 3 and younger. A press release announcing the policy stated, "On average, a child will die every 5 days in the United States from choking on food."

The lead author of the American Academy of Pediatrics study is Dr. Gary Smith, director of the Center for Injury Research and Policy at Nationwide Children's Hospital in Columbus, Ohio. He said, "If you were to design the perfect plug for a child's airway, you couldn't do much better than a hot dog. It will wedge itself in tightly and completely block the airway, causing the child to die within minutes because of lack of oxygen."

Yet the New York City Department of Health has taken no steps to require the consent of parents before their child is fed a hot dog.

So clearly something else is at work here. Consider, circumcision has fallen out of fashion in the West, even though the World Health Organization recommends circumcision to reduce or slow the spread of AIDS. A recent article by Danish journalist Kjeld Koplev, in Politiken, describes circumcision as a ritual involving 10 men that is "abuse" and "torture."

Imagine how he might describe a first Communion Mass, as "a man in a dress plying children with alcohol."

The Danish example follows their neighbor, Germany, where, according to The New York Times, four German citizens in Hof filed criminal complaints against Rabbi David Goldberg, who serves a community of about 400 Jews, for performing ritual circumcisions.

Another factor is that, in a highly sexualized culture, the thought of a grown man having oral-genital contact with an infant raises the specter of pedophilia.

In the Sept. 24 edition of The New Yorker magazine, Malcolm Gladwell writes about Jerry Sandusky, the former assistant football coach at Penn State University, who was convicted on child molestation charges.

Gladwell quotes authorities on pedophiles in describing their methods. A pedophile, he writes, is someone adept not just at preying on children but at confusing, deceiving and charming the adults responsible for those children.

Where is the confusion or deception for parents who have freely asked for the rite of circumcision and who have freely engaged the services of the mohel who performs it?

Gladwell describes "the grooming process" by which a pedophile hooks his victims. He looks for vulnerable children, most often boys whose home lives are in disarray. He then insinuates himself into the vacuum left by an absent, typically, father. Gladwell observes that a vigilant parent, one who questions the special attention shown a child by a pedophile, will usually send the pedophile running. Secrecy, and the shadows, Gladwell argues, is a pedophile's friend.

How does any of this describe the mohel? His encounter with the child is a one-time event, involving an infant too young to be "groomed." Everything the mohel does is in full view and with full consent of the parents. Circumcision in the Jewish tradition is a public rite, with enough onlookers to ensure that nothing outside the boundaries of the rite occurs.

In the New York case, some parents complained that while they asked for the circumcision of their sons, they did not know that metzitzah b'peh would be part of the ritual. Should parents and participants, as far as they are able to understand, be informed of the elements of a religious rite? Of course. The time to learn that you or your child will be fully immersed at baptism is not in the middle of the rite.

But it is the role of the officiant, the one deputed by the religious community, to explain the rite.

Government officials do not get to dictate how Jews will raise their children, even when their practices are foreign to the rest of us. Mormons get to wear odd underwear. Muslim women get to cover their hair and faces. Sikh men get to grow their hair long and wrap it in turbans. And Catholics get to offer the cup of salvation, filled with wine transformed into the blood of Christ, to children far below the legal age of drinking.

It is an uneasy truce, this one we keep not only between various faiths but between believers and nonbelievers. But this truce is, as James Madison wrote long ago, the "lustre" of our country. It is worth keeping and even celebrating.

[Melissa Musick Nussbaum lives in Colorado Springs, Colo. She is co-author, with Jana Bennett, of Free to Stay, Free to Leave: Fruits of the Spirit and Church Choice.]

A version of this story appeared in the Nov 9-22, 2012 print issue under the headline: Religious protections are worth keeping.