Settle in around the headstone for a picnic 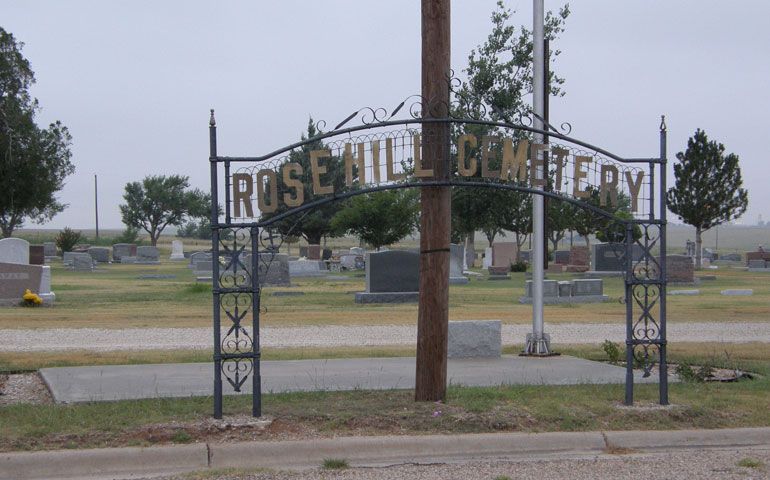 I grew up among grandparents who went every year to their birthplaces for the family grave-cleaning and dinner on the ground. Back to Tolar and Kosse and Colorado City, they went to chop weeds and mow and plant and keep the graves of their parents and siblings. They brought baskets of food -- fried chicken, and green beans cooked with fatback and new potatoes, and peach pie, and cornbread -- to eat when they broke from work at midday.

Many of the dead had been born in other places: Mississippi and Tennessee and Louisiana. But civil war or the quest for cheap land, and lots of it, brought them west to Texas. It was not an easy, or always welcome, journey.

Mother Curry used to tell us the story her mother told, of riding a train from the green hills of Tennessee to join her husband on the prairie. She said she spied what she thought was a tall tree on the horizon and began to weep for joy. Where there was one great tree, there must be others. As the train drew nearer, she saw that it was a heap of buffalo skins, no shade or respite there.

My father's mother, Ma-Maw, told us how her mother dug up flower bulbs from her Mississippi home and carried them in her saddlebags to the new land. They planted crops and kitchen gardens and flowers where they settled, and no place received more care than the graves of their dead.

By the time I was born, in Tulia, Texas, local cemeteries, including ours named Rose Hill, advertised "perpetual care." It meant that the graves were mown and the gravel walks tended.

But, in my childhood, there were no hydrants or sprinklers to water either the grass, or the rosebushes and lilacs that mourners planted. So, we would ride out to the cemetery with our grandparents, who carried buckets of water in the bed of the pickup, along with hoes and rakes and shovels.

The first member of our family to be buried at Rose Hill was my uncle Kirby, who died in World War II. My grandmother liked to go out there to be near him. Keeping his grave tended was the only earthly care she could give him, and it pleased her to do so.

I live in Colorado now, where my husband's grandmother and mother were born. He has family long buried here, but the first member of my family to lie in this high ground is my mother. She died on Dec. 21, nearly four years ago now, and her grave is in town, just a few miles from us.

Evergreen is a perpetual care cemetery, a full 40 acres and once lauded by Ripley's Believe It or Not as "the largest outdoor rose garden in the world." My mother lies next to the two plots where my husband and I will be buried, just west of the gravestone at which the propeller of a stick-mounted, gaily colored toy airplane spins and spins in the breeze.

Mother's birthday is Aug. 18, a good time for a picnic, which is what my daughter organizes at her grave every year around that time. We take out blankets and food and kids and settle in around the headstone to eat and talk and tell stories about the woman the grandchildren and great-grandchildren call Atoo.

There has to be fried chicken and Coca-Cola ("Coke syrup" being one of my mother's most trusted medicines, "Cause it'll settle your stomach," along with hot water bottles and "Chesters" -- soft cotton rags heated in the oven and placed over the sufferers' Mentholatum-smeared chests.)

There has to be something made with ripe, late-summer peaches, and I say there has to be homemade pimento cheese sandwiches, though I am the only one who will partake.

My kids draw the line at fatback, though my daughter did make red beans and rice with sausage. This is almost as good for you, my daughter remembers, as the food Atoo recommended when my daughter was pregnant five years ago: banana cream pie, which has both dairy and fruit.

I tell my grandchildren of a place and a time where no one ever ate out, except perhaps to grab a sandwich at the Heard and Jones lunch counter on the square. I tell them about the women, their great-grandmothers and great-aunts, who cooked three meals a day, with meat at every meal and dessert at two of them. I tell them about these women who made hundreds of dipped chocolates and divinity candy wreaths for us to give our teachers as gifts at Christmas time.

They try to imagine a world without pizza.

I tell them about the time when the Richards' kids joined us on Mother Curry's bed as she recited "Little Orphan Annie," from memory, in the dark. She did a convincing "goblin," so convincing when it came to "git" us, that Mrs. Richards called my mother to complain about Miz Curry scaring the children into insomnia.

I try to remember a world without 24-hour televised news keeping us all awake and anxious.

The little ones run through the grass and run their hands over the angel's wings on a nearby grave. They sing "Red River Valley" for Atoo. They sing "Amazing Grace" and "Day is Done." We say a prayer, giving thanks for all the men and women who have gone before us.

November is coming, the month when we remember our dead. It's mostly confined to church these days, but it needn't be. Feasting around the graves of our forebears and loved ones is an ancient custom.

A few weeks after my mother's birthday, I'm at the local Asian market with my friend Angie, who was born in Vietnam and grew up in the Philippines. We walk through the aisles where most of the food, like bitter melon and durian and mangosteen, is unknown to me. But it brings back memories to Angie, as she tells me of the dishes her grandmother made.

Her grandmother had medicinal recipes, too, like pork, cooked, and pounded almost to dust, and sprinkled over porridge. Served with a Coca-Cola, it would probably, as I can hear my mother saying, "raise the dead."

I tell her about our graveside picnic and she tells me about November in the Philippines, when the cemeteries are crowded with mourners who have come with food and flowers and gifts and candles to honor the dead. She remembers playing with the drippings from the candles, rolling the soft wax into balls.

We stop in the aisle where, for $2.95, one can buy a cemetery offering, a nearly weightless package of a paper dress with matching jewelry and watch. Angie remembers these offerings, too, and how they were burned, by the hundreds and thousands, all to be received by the wind, or the ancestors, or the ground in the city of the dead.

[Melissa Musick Nussbaum's column for NCR is at NCRonline.org/blogs/my-table-spread. More of her work is at thecatholiccatalogue.com.]

Spirituality | Settle in around the headstone for a picnic

Bishop first in US to approve Marian apparitions