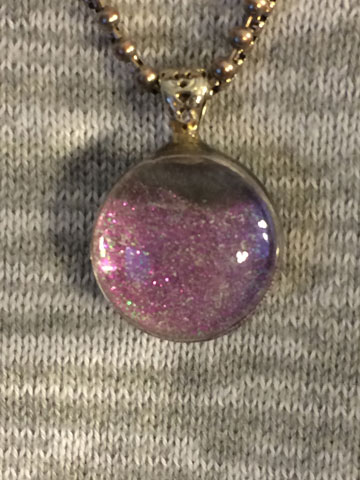 The necklace with Ed's ashes

I'm Catholic, but my oldest sister, well, she's an Edist. She believed, and believes, in Ed, her late husband.

After my sister had a heart attack, she went into the ICU. The bag containing clothes, shoes, reading glasses, Kindle and wristwatch, all the hopeful markers of her life, had to be taken home. No quick stent and out for my sister. She was intubated and sedated, and I flew out to California to be with her.

The day came when they started talking about taking out the breathing tube and the feeding tube. They would begin lightening the sedation, all in the hope that my sister would wake up and know us and know herself.

Part of knowing herself is remembering Ed. She keeps a bottle of his cologne on her dressing table. If we go through a car wash, she reminds me that Ed thought car washes were a waste of time and money. Most of her reflections on food, kinfolk, movies, books, politics or weather include some comment on what Ed thought, thinks, about that.

Ed was not my sister's first husband. She was 20 when she married a good-looking disc jockey from Cactus, Texas. "Good looking" turned out to be the best thing she could say about him. He got a job as the program director at KIXZ in Amarillo. They had two children. He got a better job at KEZY in Los Angeles. They moved to Anaheim and he left her for a girl-group singer.

Then my sister met Ed, who always counted the day they met as his luckiest one. They got married and blended their families.

Ed retired from advertising, though he kept the black-and-white, Mad-Men-era agency photos of himself, suited and smoking, martini at his side. He acted, in commercials, mostly, and in a cameo for a movie.

Mostly he ran the house while my sister traveled, meeting with fabric suppliers and T-shirt designers, negotiating deals with Disney and Wal-Mart and Hallmark. They lived happily, if not ever after.

Ed got sick. My sister remembers climbing into his hospital bed, curling herself around the tubes and him, holding tight. He told her, "I just want a little more time." He meant "with you."

She says, "We weren't quite done." She means "with each other."

So, when the doctors started talking about bringing her out of the chemical sleep, we agreed that she would need Ed where he'd been all those years, right beside her. I went back to her house and found the necklace.

The sparkling pink glitter in the orb looks nothing like charred bone or incinerated flesh. The necklace is like a Victorian hairwork mourning wreath; you wouldn't guess that the flowers were fashioned from a dead person's curls.

I brought Ed to the hospital and gave him to my niece for safekeeping. Once my sister began to wake up, my niece tucked the necklace in the pocket of her mother's hospital gown. My sister was groggy, but she heard, and she smiled.

My niece went to work and my nephew and I took her place near my sister's bed. When my nephew got up to leave, he reminded us all about Ed, and reached into the gown pocket to reassure his mother, "Look, he's right here."

The pocket was empty.

We searched the bed, careful not to kink or yank the tubes. We searched the table, where cards for my sister and snacks for the watchers had accumulated. We looked under the bed and in the chair where we had taken turns spending the night. We looked in the closet, feeling among the stiff, folded sheets and sheet-like blankets.

Every two patients in this ICU has one nurse, who has a desk in the hall between two side-by-side rooms, where the nurse can chart and call the doctors or therapists, all the while keeping watch through large windows. The ratio sounds luxurious, but it means the nurse is constantly moving between the patients.

The nurses are always working, and not all of the work is medical. The alarms sound, the monitors beep, the man with the broken neck demands his bass guitar and his black bag. It is forever time to move the patient, empty the catheter, check for bedsores, suction the breathing tube, change the beds, call a code, holler for help, pour more liquid down the nasogastric tube, take temperatures, figure out what system (human or mechanical) is failing, hang medications from the IV poles standing like bare winter trees around the bed.

I didn't want to interrupt the day nurse for a necklace. Still, I didn't know what would bring my sister back to us. It might be the necklace she wore every day. It might be Ed, who had brought her back to life once before.

The nurse looked annoyed. Losing a necklace is not what they most fear losing in this place.

I told her, fumbling for the words, not sure how to explain or describe a necklace-urn. "She has her late husband's ashes in it," I said, wondering only later why I had felt the need to add the qualifier "late" to "husband's ashes."

I said, "Have you changed my sister's gown?"

She looked stricken. She had changed her gown, several times. Central lines and tubes and catheters and needles and anticoagulants combine to cause leaks and seeps, the skin violated, its defenses breached.

I went in the room and began going through the laundry hamper. There wasn't much in it. I went back in the hall and told the nurse.

"I think they've taken the laundry," she said. "I'll call down and ask." She was on this task, searching now for a different sort of medication, an alternate therapy.

The laundry, I learned, is sent to an off-site facility. It was gone, but the nurse would call the facility and describe the necklace as I described it to her. She told me they would look.

We decided not to tell my sister what had happened. The staff wanted her quiet. We stood by her bed as she slept, talking softly about soup recipes, keeping the tone light and amiable. No one dies in soup; nothing is lost.

But my sister did hear us talking. She took my hand. I leaned down to listen. She said, "Don't worry about the necklace. I don't want you to worry. Ed already did his job." She closed her eyes.

We asked my sister if she had more ashes, as if she had Ed stockpiled somewhere against the days of famine.

I said, "We'll have another necklace made."

My sister slept. Ed had already done his job.

The next day I was alone in the room with my sister. Two women came in and introduced themselves: the laundry supervisor and her assistant. They apologized for the loss of the necklace, though, of course, they'd had nothing to do with its loss.

Now that she knew she had located Ed, the supervisor turned the phone so that my sister could see the screen. She looked at it and smiled.

The women said they would have the necklace back to my sister by late afternoon.

I kissed my sister and told her I needed to go downstairs and catch a cab to the airport. I was leaving, but Ed would be right back.

[Melissa Musick Nussbaum's column for NCR is at NCRonline.org/blogs/my-table-spread. Her latest book, with co-author Anna Keating, is The Catholic Catalogue: A Field Guide to the Daily Acts That Make Up a Catholic Life and will be in bookstores in February 2016.]

A version of this story appeared in the Dec 18-31, 2015 print issue under the headline: A true tale of love (and laundry) lost (and found).