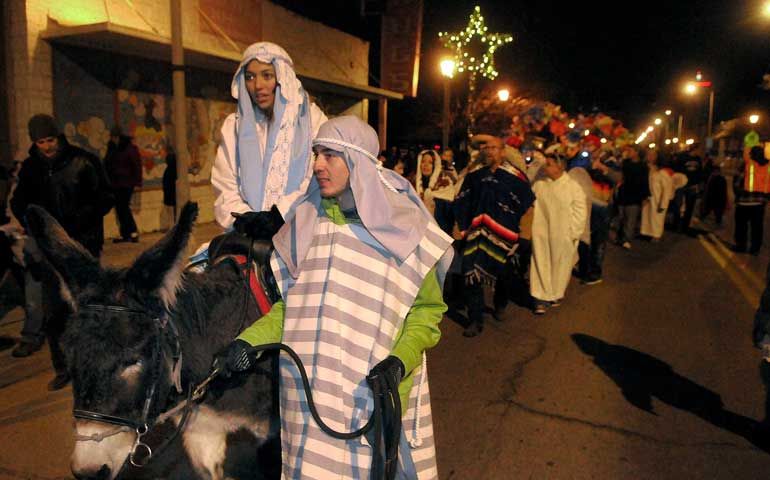 The largest Spanish-speaking parish in my town is Our Lady of Guadalupe, but my bilingual parish is second. We have two Sunday Masses in English, one in Spanish and one in both languages. We share a single church building, but our communities are divided by language and custom.

We're trying to help the English and Spanish speakers meet one another as more than co-tenants. Last spring, we combined our Spanish and English Stations of the Cross into shared bilingual devotions. The readings and prayers alternate between English and Spanish. Because most people know the prayers and responses by heart, it works.

We have a simple soup supper after Stations, so the same people who prayed next to one another sat together at table and talked. Some of us met longtime parishioners who, until that Friday, had been strangers. We'll be praying in English and Spanish again this coming Lent.

But Stations tends to attract more adults than teens or children, which is where the celebration of Las Posadas ("The Inns") in Advent plays a role. Like the Stations of the Cross we make with Christ in Lent, Las Posadas is a way to share the difficult journey Mary, Joseph and the unborn Jesus made to Bethlehem.

Colorado has a large Spanish-speaking immigrant community, so our diocese is devoted to protecting the rights of workers, offering ESL classes and helping families integrate into our towns and cities. It can feel a bit one-direction, a little "Lady Bountiful scattering green cards among the masses." Because immigrants bring us gifts, enrich us and improve our lives, as well.

We see it every December now, when we gather at St. Mary's Cathedral on a dark, cold night to hear again the story of a family, poor and alone and far from home in a town called "House of Bread."

Las Posadas is a walking novena, kept for nine days in honor of Mary's nine months of pregnancy, with movement and lots of singing.

It is the practice in Mexico for people to go from house to house each night of the novena, knocking on the door and asking that the Holy Family be admitted. We leave the cathedral, led by two children dressed as Mary and Joseph, and by a guitar-playing band. We carry lights as we make our way across a busy street to the Marian House Soup Kitchen. There, we go from door to door, asking for shelter and being turned away.

The requests and the responses are sung, with lyrics that are often raucous and funny. The homeowners sing that they are tired, the knocking has waked them from a sound sleep, go away and bother someone else. It sounds like what we would probably say if awaked by a couple of strangers asking for a room.

At one door, Joseph and the rest of us sing, pleading for a night's lodging for the Queen of Heaven.

The homeowners demand to know what kind of queen goes out alone at night.

Last December, I walked holding the hand of my 4-year-old granddaughter. After the third door, she turned to me and said, "Oh, I hope, hope, hope that they find a place to stay."

Then, worried that I might be worried, she consoled me. "Don't worry, Ma-Maw. The story has a very happy ending."

And so it does. At last, the innkeeper admits us, telling us there is room in the barn, among the animals, the first to see the newborn King. Some say it was the rooster who flew to the top of the stable and crowed, "Christ is born!" (In Mexico, the Mass at midnight on Christmas Eve is called the "Mass of the Rooster.")

We come into the dining room, lit and fragrant with food. We are welcomed as holy pilgrims with song:

The room is humble, but our welcome is heartfelt.

We eat and watch the local Mexican dance troupe perform. Near the end of the evening, it's time for the piñata. The traditional Las Posadas piñata is a seven-pointed star. Each point represents un pecado capital, one of the seven deadly sins. The children whack the piñata with a stick, just as we are called to crush sins in our lives, and the fruits of heaven spill out onto the floor in the form of candies and trinkets.

But the fruits of heaven can be found everywhere on this night, when we gather as strangers and together find a home.

[This article first appeared in the December 2014 issue of Celebration, the worship resource of the National Catholic Reporter. Melissa Musick Nussbaum writes from Colorado Springs, Colo.]

Spirituality | We gather as strangers and find a home

Courage needs to make a comeback to create change

St. Benedict's 12th step is the challenge to become humility itself