A whole box of tools other than a gun 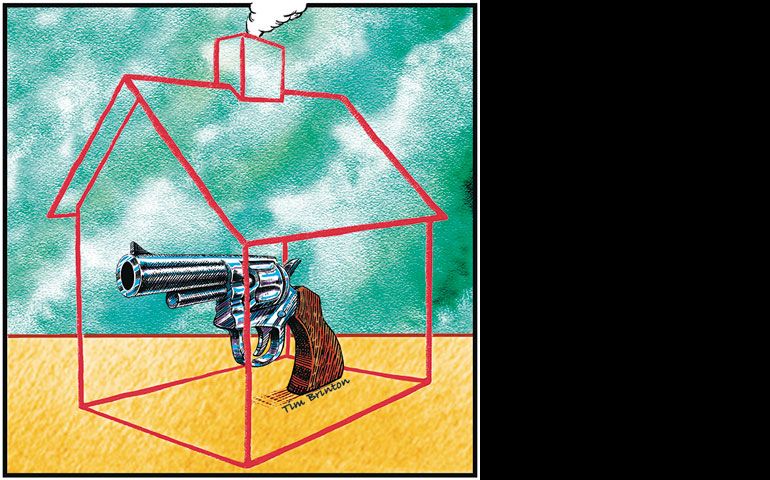 In my last column, I wrote about my daughter's work to reduce violence in Colorado Springs, Colo. Shortly after I sent that piece to the editors at NCR, my daughter faced violence in her home.

She had been up all night with her 5-year-old son. He was running a high fever, restless and uncomfortable. By noon the next day, his fever had broken and he fell asleep on the living room couch. My daughter went to the master bedroom, a few feet from the living room, where she also fell asleep. She did not hear the man break in through the mudroom door.

The yelling woke her up. My daughter ran to her son and found him sitting upright, his eyes wide, as a man stood over him. The man was in his socks and covered in mud. He was yelling about the war.

My daughter took his arm. She said, "Come with me. I'll help you with the war. We'll take care of the war." She began pulling him toward the door.

Then she turned to her son and told him to run to her room, to lock the door and hide and not to come out until she called him. He ran.

She says she knew from years working in the hospital emergency department that the man was mentally ill. The police later told her he was high on meth. And she knew she had to get him away from her son. She began steering him toward the front door and the yard outside. She says she does not remember actually getting him out of the house. Muddy handprints on the walls testify to his resistance, but she says doesn't remember that, either.

Once they got outside, the man broke away from my daughter and ran. He would break into several more homes before he was finally caught and arrested. My daughter ran, too, back inside to her son. They huddled together as she called 911 and waited for the police to arrive.

One of the officers told her as he took her report, "You know it's your legal right to protect yourself and your family with a gun if someone breaks into your home."

Once the story ran in the local papers and on the television news, my daughter heard from several people who lamented that she had not had a gun handy. Some told her that if that man had broken into their homes, "it would have been two in the chest." A neighbor asked me, "When is she going to get a gun?"

This is what my daughter knows: A gun in the house is most likely to be used on someone who lives there. She has studied articles like the one Dr. Arthur Kellermann wrote in the Journal of Trauma, Injury, Infection, and Critical Care, titled "Injuries and Deaths Due to Firearms in the Home." He wrote that a gun in the home is 22 times more likely to be used to kill or injure in a domestic homicide, suicide or unintentional shooting than to be used in self-defense.

She knows that a gun, safely stored, would have taken precious seconds to locate and load. The man might have used that time to grab her son and leave the house. She knows that this man, screaming about the war, might have turned even wilder at the sight of a gun. He was larger than my daughter. What if he had seized the weapon and turned it on her and her son?

This is what I, raised in a rural Texas where everyone I knew kept rifles to shoot coyotes and jackrabbits and snakes, know: It's hard to hit a target in such a closed space, under such pressure, especially when the intended target is moving and is near someone, like my grandson, whom the shooter is trying to protect.

Television and movies make it look easy, and foolproof: Ready. Aim. Fire. The bad guy goes down. But bullets ricochet and go wide, or pass through the target and into others. If my daughter had a gun, she would just as likely have shot her son as their intruder.

My daughter believes that part of protecting her son is not shooting someone on the floor where he and his brother and sister play. What my grandson remembers most about that day now is the giant roll of stickers the police gave him and the reporters who came to his door with microphones and cameras. He remembers getting to have a slumber party that night in his parents' bedroom. He remembers being allowed to splash as much holy water as he wanted around the house when his parish priest came over to bless it and his family and reclaim the place for goodness.

My daughter wonders what he would be remembering -- now, and for years to come -- if he had watched a man die in his house.

Don't misunderstand me. If things had turned out differently, I would probably be wishing she had owned a gun. And a tank. And a flamethrower. That's my protective instinct, and it is strong. My husband says I have the best theology of anyone he knows until it comes to our kids and grandkids, and then I'm all pitchfork-wielding peasant wreathed with garlic and hunting the monster. That's about right.

So I don't want this to sound overly pious.

I wasn't thanking God that my daughter and her husband didn't have a gun so much out of concern for the intruder, as out of concern for them. Guns do kill people -- often innocent people. Their use, and sometimes just their display, means other defenses and strategies don't even get tried.

I was talking to our daughter's younger brother about the break-in. I said, "She doesn't remember getting him out of the house. She's not sure how she did it."

He said, "Oh, I know how she did it. That oldest sister voice. I've gone lots of places I didn't want to go on the force of that voice."

We laughed, because we could. We can laugh and we can offer a toast: Here's to a whole box of tools other than guns, "that oldest sister voice" included.

[Melissa Musick Nussbaum writes her column, My Table is Spread, for NCR. More of her work is at thecatholiccatalogue.com.]

People | A whole box of tools other than a gun

A commission to forgive, to restrain evil, and to bring life