African-Americans fail to gain from purchasing a home

Johns Hopkins University has produced an important piece of research that is also highlighted in Dan Rodricks’ column in the Baltimore Sun. The results in fact were described as “sort of stunning” by Johns Hopkins researcher C. Scott Holupka.

The assumption was that ever 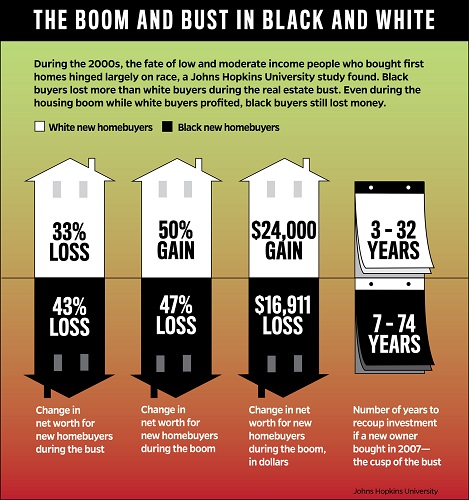 yone who bought a home during the housing boom of 2005-2007 made money or increased their wealth as the value of their property inexorably rose.

Likewise, during the bust period of 2007- 2009, those who purchased homes lost money and in many cases wound up underwater.

These assumptions proved true in the Johns Hopkins research except for one group -- African-Americans.

How could this be? It turns out the factors that mattered in their purchase were their socioeconomic status, the neighborhoods they purchased homes in, and the failure of their property values to rise regardless of the larger economic conditions. The startling assessment is that these families would have been better off had they remained renters rather than purchased a home.

No one could have predicted such unlikely results. It is disturbing since the purchase of a home has been the route to gaining wealth for generations in this country. It seems this path is not open to one section of the community.

Recent events have blown apart the myths that we now live in a post-racial world, affirmative action is no longer needed, and all Americans now have equal access to the American dream. Certainly, the continued disturbing incidents between black Americans and the criminal justice system have provided awareness to Americans that serious problems remain. Now it seems that an important avenue for getting ahead in this country is also denied to African-Americans.

Segregated housing patterns are not just unfortunate. They are also creating a very unequal playing field. Just as in the educational sphere, separate but equal turns out to be separate but unequal.

Justice | African-Americans fail to gain from purchasing a home

Tulia, Texas, is a complicated place of pain, redemption