'American Sniper': A question of heroes 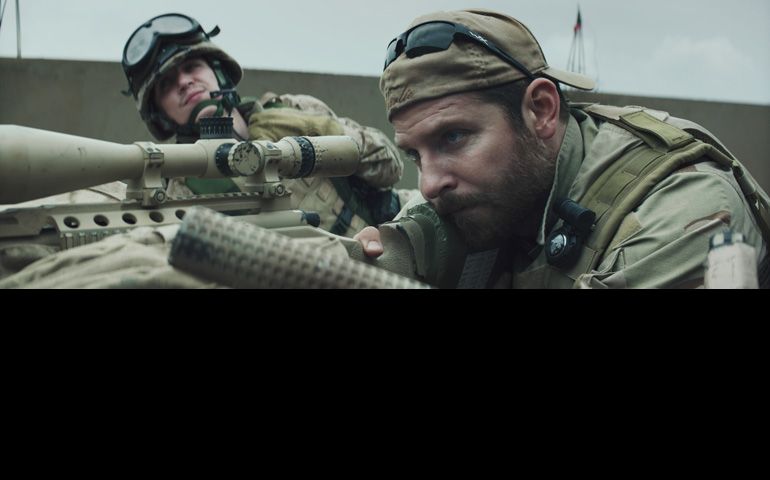 Editor's note: This review contains spoilers about the life of Chris Kyle.

In Clint Eastwood's Iraqi Western, we see the evolution of Navy SEAL Chris Kyle's (Bradley Cooper) skills as a shooter as well as his motivation for enlisting in the military and going to war: God, country, family.

As Chris (played as a child by Cole Konis) grows up in Texas, his dad, Wayne (Ben Reed), teaches him to hunt and how to handle a rifle. Wayne infuses in the boy ideals of heroism and says aggression is a gift to save others. One Sunday at church, Chris takes a small Bible and keeps it.

We see Chris and his brother, Jeff (Kier O'Donnell), watch the news coverage of the 1998 bombings of the U.S. embassies in Nairobi, Kenya, and Dar es Salaam, Tanzania. Chris joins the Navy soon after and becomes a SEAL sniper. At a bar one evening, he meets Taya (Sienna Miller), and they marry soon after. They watch the fall of the twin towers on 9/11. When the U.S. invades Iraq in 2002, Chris is sent to protect Marines doing house-to-house searches to hunt down Abu Musab al-Zarqawi, a terrorist with allegiance to Osama bin Laden. But Chris cannot stay on a rooftop. He joins the Marines to pursue al-Zarqawi's second in command, a man nicknamed "The Butcher" (Mido Hamada) because of his penchant for using a drill on prisoners.

Chris' first "kills" in Iraq are a woman and a boy with a grenade. He seems deeply affected by this, but he continues as a sniper because it is his job.

On his second tour, Chris is involved in a long, extended shootout with The Butcher. On his third tour, Navy SEALs are killed. Chris, despite the fact that he now has a son and a daughter, goes on a fourth tour and takes out an insurgent sniper named Mustafa (Sammy Sheik) at 2,100 yards, one of the longest kills on record.

The Bible shows up again when Chris is in Iraq. If I recall correctly, as he puts it in his pocket, one of his buddies mentions that he's never seen him open it. Neither do we.

I think it was Clint Eastwood who said this is a film about a family, and perhaps 20 minutes of a total running time of 135 minutes is dedicated to Chris and his family, his wife's pleas for him to stay home, to come home, for the sake of his children. But that leaves a lot of time for military training, violence, and battle.

"American Sniper" is devastating on the emotional level, especially with a very buffed-up Bradley Cooper in the lead role. He's everyone's image of a hero: handsome, calm, humble, strong, and brave, a warrior standing taller than the others, fighting to protect his brothers in combat and a greater vision of America.

Chris sees a mental health professional at one point and declares that he can stand before his Maker regarding his kills: 160 altogether. Though the film shows Chris as having some kind of inner distress resulting from his experiences, it wasn't enough to stop him from co-founding Craft International, a tactical training company for hire by the military and law enforcement, when he leaves the military. The emblem for the company that Chris designed states, "Despite what your mama told you, violence does solve problems." (Did you notice the image on a T-shirt that Kyle wears in the film, the one with the skull? It's from the Marvel comic character Punisher.)

As Kyle chases his prey, "American Sniper" is reminiscent of a cowboy chasing an Indian. The whole thing is set up visually like a militarized, mythic Western reduced to good guys vs. bad guys.

Using visuals to establish the 1998 embassy bombings and the 9/11 attacks as the motive for the U.S., and hence Chris Kyle's going to war in Iraq, is what turns "American Sniper" into a pro-war film. It never acknowledges, or at least questions, that the war in Iraq was a fake war, built on a lie that has led to the ongoing destabilization of the entire region. Perhaps Chris did rationalize his participation in the war based on these acts of terror, but the film needed to find a way to make this distinction. If it had done so, the overall tragic waste and loss of life -- including Chris Kyle's death at the hand of a veteran he was trying to help a mere three years after his return home -- would have made for an honest film.

The film ends with actual footage of Chris Kyle's funeral, with veterans from Vietnam and more recent wars lining the streets leading up to the Dallas Cowboys' stadium. This was the most heartbreaking part of the film to me. It's lose-lose no matter how you look at it: The government that sends these men and women to war does not take care of them during the war or after, yet they are here for one of their comrades in arms.

"American Sniper" is a film based on Kyle's best-selling memoir of the same title that could lead U.S. citizens to think twice about joining the military because they would be asked to do things that are ethically and morally wrong -- indeed, evil -- especially if the premise for military action is based on a lie dressed up to look like a noble call to arms to protect one's country.

Once you're in, you cannot get out. You cannot ask questions. You cannot play the conscience card later. Another sad reality is when joining the military is the only job option to young people in poor, economically stressed areas. Not only will they get a paycheck, but they will be serving their country. How is clear; what is not clear is why. This is America's shame as we now live in a state of continual war and fear.

I kept asking myself through tears at the end: Can a person be a hero in a fake, unjust war? Chris Kyle was his father's son and a victim of American hubris, cultural and economic expansionism, and dependence on oil. He is the military sniper with the most kills in history. But for what?

Did Clint Eastwood do us a favor in this highly romanticized war film by creating an image of a new mythic, Western soldier-hero in a war that did not have to be?

Chris' dad may have been thankful for the gift of aggression, but look where it got Chris and thousands of others like him in wars that never had to be. Revenge and yelling "lex talionis" as a battle cry may get the adrenaline going, but how does revenge save anyone's life? Who does this protect? How is this ethical or moral? The film never questions this ideology. Chris may have suffered some inner turmoil over his actions, but in the end, he went with it.

I grew up military. My dad was a World War II and Korean War veteran and spent 24 years in the Navy. My mother spent a short time in the Navy, as well. My two grandfathers were in the Army. Two of my brothers were in the military, and three nephews. I get it.

I did not read the book, so I am not able to comment on how factual the film is. But I can and do question the truths, or half-truths, it holds out to us and its degree of honesty. Clint Eastwood says the film is not pro-war, but I say that any film that does not question the premise of the war that is the context for the story -- well, what else can it be?

There has to be a better way.