Archbishop Tomasi: Keep a spotlight on the Middle East 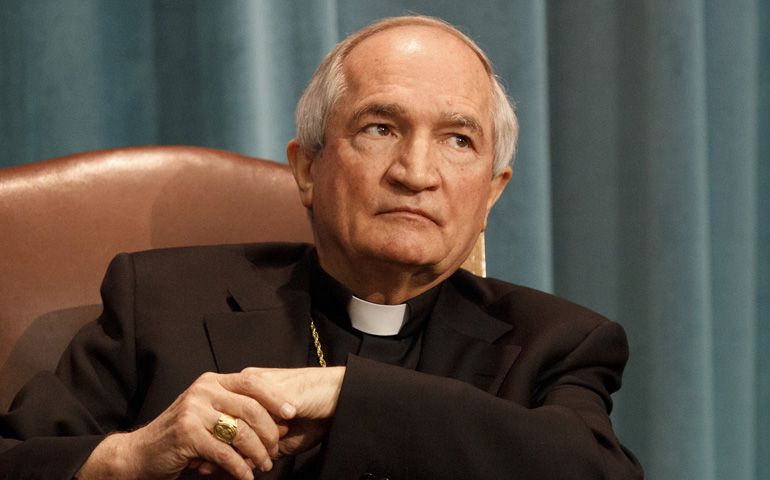 Archbishop Silvano Tomasi: "Just relationships and respect of the dignity of every person are the best prevention of violence." (CNS/Paul Haring)
This article appears in the Q&As with Vinnie Rotondaro feature series. View the full series.

The 24-hour news cycle has a way of, well, cycling. In August and September, headlines of bombings and beheadings ran rampant on newspaper front pages across the country. It was around-the-clock coverage of Iraq and Syria and the incursions of the Islamic State militant group. Then came Ebola, and the focus on the Middle East softened considerably.

Nevertheless, life in the region continues to be upheaved by war, murder and chaos just as it was a month or so ago. Headlines be dammed. NCR interviewed by email Archbishop Silvano Tomasi, permanent observer of the Holy See to the United Nations in Geneva, for his thoughts on what is needed to curb the chaos in the Middle East, and what a conscientious Catholic should keep in mind while balancing out moral attention in a globalized world.

NCR: In America, media coverage of the synod on the family focused on the so-called Western concerns of gay marriage, birth control, and divorce and remarriage. Issues affecting families in other parts of the world -- some of which are war-torn and in states of chaos, like northern Iraq and Syria -- were barely mentioned. What is life like for families in Iraq and Syria, and what do the conditions they face say about what's happening in the region at a human level?

Tomasi: The risk is real that the globalization of indifference may prevail. If for a couple of days the headlines don't report on the plight of the uprooted people of Northern Iraq, Syria, or of other troubled areas like South Sudan, public attention fades and the suffering people continue their struggle for survival forgotten and alone.

Forcibly displaced people in Syria reach 6.4 million, half of them children. Some 200,000 people have been killed in three years of conflict. Across Iraq, an estimated 1.8 million people have been displaced since January. Iraq is also hosting 215,000 Syrian refugees. Families are torn apart, at times for years. Education for the children is difficult or impossible and life in rudimentary camps renders family life a daily battle to ensure food and water, protection against the cold, mutual acceptance under constant strains.

The spotlight on the uprooted families by the so-called Islamic State has been lit by Pope Francis with the exceptional meeting he called of the Middle East nuncios and a second one of Cardinals and Patriarchs, a consistory, when a careful analysis of the situation in that region was undertaken from direct experience on the ground. A call was renewed for dialogue, to end violence, for reconciliation, for protection of people's fundamental human rights like freedom of conscience and religion.

Earlier this month, you attended a three-day summit in Rome to discuss the situation in the Middle East. What were the major takeaways from that meeting?

First, the October 2-4 meeting we had in the Vatican was a sign of solidarity with the persecuted Christians and Yazidis threatened with genocide because of their religious convictions. Second, we wanted to highlight the international consequences of this tragedy. Third, a common search was undertaken to identify immediate concrete measures that should be implemented to alleviate the displaced people's suffering. Thus clearly rejected were the horrors committed in the name of religion and the right of the refugees to return to homes and properties was restated. There has been a total convergence on the preference for a political solution to the conflict and this for the Israel-Palestine conflict at the root of the Middle East instability and for the current confrontations in Syria and Iraq. The use of force to stop the unjust aggressor has also been the subject of a careful and intense discussion.

In September, Cardinal Pietro Parolin, the Vatican's secretary of state, told the U.N. General Assembly that the terrorist actions taking place in Iraq and Syria should "compel the international community to promote a unified response." Is the current response to the Islamic State sufficiently unified?

When a State is unable to protect the rights of its citizens, especially if threatened with genocide, the responsibility to protect them falls on the international community, of course, with certain conditions and appropriate modalities to avoid, for example, doing a worse damage. Before the urgency of dismantling the so-called Islamic State I think the objective goal should be the protection of the victims through the action agreed by the appropriate mechanisms of the international community and not settling political scores. In this particular case, the participation of the Muslim majority countries of the region appear necessary to avoid the perception of a religious war with unforeseen future consequences or simply the perception of an invasion.

Many argue that war is part of the answer. How do you respond to them?

For Christians, every effort must be made to avoid war. Violence generates violence and sows the seeds of future conflicts. But not every use of force is a declaration of war. A policeman that uses force in an unruly neighborhood to protect the local people from harm is not declaring war on them, but defending their rights. The international community has given itself some instruments like the United Nations Security Council to respond to emergencies. The crimes against humanity and the horrors carried out by ISIS must be stopped and the guilty perpetrators brought to account. At the same time the international community needs to go beyond a military solution and address the causes that prompt some individuals to choose the path of violence. Ideologies, frustrations, non-compliance with treaties and U.N. decisions, arms trade and illegal profits, all these elements enter the equation that generates violence. Just relationships and respect of the dignity of every person are the best prevention of violence.

There is an effort in America to raise public awareness about the plight of Christians in the region. What should Americans and other Westerners keep in mind while promoting this cause?

In today's world, Christians are the most persecuted community, and not just in the Middle East. Awareness of this fact is the first step needed to encourage an effective advocacy role in the international context. A false modesty seems to block a clear defense of the human rights of Christians on the part of Western countries as if these rights did not apply to them. I would say that the promotion of the dignity and right of every person as a child of God made in His image, an inclusive approach, would benefit Christians and any other religious group. The quiet acceptance of exceptions to ratified treaties, for example in the case of conversion, to accommodate political situations, does not help the protection of Christians. Consistency in the application of human rights should be upheld. The issue is not a demand of privileges, but a fair application of agreed norms and respect of innate rights even on the part of reluctant allies.

Do Christian populations in the Middle East need special attention, or protection?

In the Middle East, Christians need equal recognition of their civil right. They need equal attention, that is equal to any other citizen of the State. The uninterrupted exodus of Christians from the region is progressively emptying out the Middle East of their presence. The root of the problem resides in the structure of the State that reduces Christians to second class citizens and the target of systemic discrimination, for example, in their inability to accede equally to State functions. The juridical second class status is reflected in popular opinion that conditions the court system, access to jobs, and daily life. The remedy would be a clear separation of the religious and political domains. I would say that the Middle East needs the Christians as a sign of pluralism that encourages equal participation in the management of social life and therefore of the choice of dialogue rather than conflict to succeed in building a democratic State.

Aside from the Middle East, where else in the world is the Vatican focusing its diplomatic efforts? What other trouble spots should a conscientious Catholic be aware of?

Peace and the respect of the dignity of every person are central concerns. But current reports indicate that there are 584 non-State groups engaged in violent action for ideological, political or money reasons involving 64 countries, especially in Africa and Asia, including the Middle East. The culture that supports such violence clashes with the message of the Gospel, a culture of selfish individualism versus a culture of solidarity. The challenge for a conscientious Catholic and for all of us is to become the yeast that leavens the dough, protagonists of a civilization of love that changes the world.

Just war theory expert on how to respond to ISIS

Talking Doomsday: How do we turn the corner on nuclear weapons and climate change?

Italian filmmakers: 'Life can be very different...things can change'

Indiscriminate juvenile shackling, like putting kids 'in the stocks'

World | Archbishop Tomasi: Keep a spotlight on the Middle East