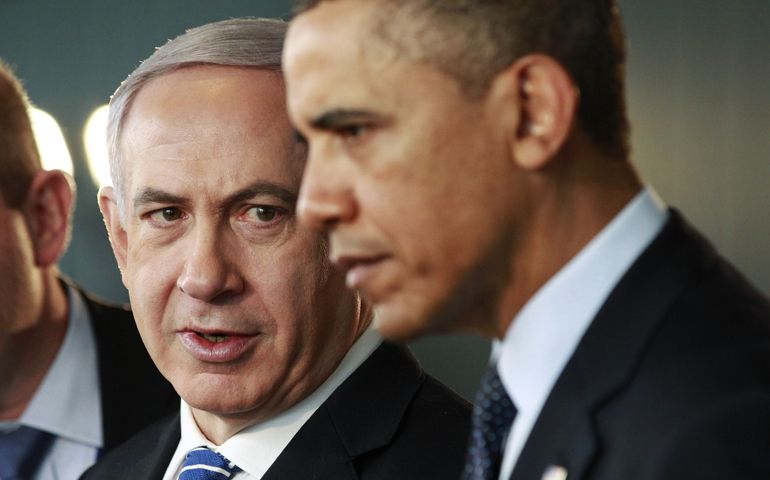 In a scene from "The Honorable Woman," an award-winning 2014 British fictional miniseries about the Israeli-Palestinian conflict available on Netflix, the U.S. secretary of state criticizes Israel for not reining in Jewish extremists and announces that America won't use its U.N. veto if Palestine requests recognition of statehood.

Until recently, such a scenario would have been unthinkable except in fiction. But the longevity, partisanship and intensity of the ongoing spat between Israeli Prime Minister Benjamin Netanyahu and President Barack Obama's administration over U.S. negotiations with Iran on the nuclear issue have opened up rifts that may herald the beginning of a fundamental long-term shift in U.S.-Israeli relations.

Suddenly, the possibility of the U.S. not automatically vetoing any international resolutions sanctioning Israel or supporting the Palestinians is no longer fictional. Dov Weisglass, a top aide to former Israeli Prime Minister Ariel Sharon, warned that Israel may find the U.S. no longer supportive next time "it found itself in conflict with hostile world organizations."

The latest blow-up with the Obama administration resulted when Netanyahu accepted a back-door invitation from Republican House Speaker John Boehner to address Congress that bypassed the White House and inserted Netanyahu square in the heart of the bitter U.S. partisan divide. Netanyahu plans to use his speech to Congress on Tuesday to argue against the emerging international nuclear deal with Iran, led by the United States.

Writing in a Washington Post blog, Ed Rogers, the chairman of the lobbying and communications firm BGR Group, labeled Netanyahu's refusal to meet with Democrats a "consequential mistake," noting: "The stakes are too high to snub anyone or give your critics another reason to oppose you."

Netanyahu and Obama have had a series of run-ins over Iran, Israeli-Palestinian peace efforts, and Israeli settlement construction, but this latest spat appears to have sunk U.S.-Israeli relations to their lowest point since Secretary of State James Baker told Israel in 1990: "Call us when you are serious about peace."

The Obama administration has responded forcefully to Netanyahu. Using language rarely heard between Israel and the U.S., national security adviser Susan Rice told Charlie Rose on Feb. 23 that the partisanship engendered by Netanyahu's upcoming visit was "destructive of the fabric of the [U.S.-Israeli] relationship."

U.S. Secretary of State John Kerry was just as critical. At a House Committee on Foreign Affairs hearing on Feb. 25, he said: "Israel is safer today with the added time we have given and the stoppage of the advances in the nuclear program than they were before we got that agreement, which by the way the prime minister opposed. He was wrong."

He added: "The prime minister was profoundly forward-leaning and outspoken about the importance of invading Iraq under George W. Bush. We all know what happened with that decision."

Neither Obama nor Vice President Joe Biden will meet with Netanyahu during his visit. In addition, there is reportedly a growing list of 22 Democratic members of Congress who will boycott Netanyahu's speech in Congress, including Steve Cohen and Jan Schakowsky, who are Jewish.

The U.S. also has decided to "reduce the exchange of sensitive information about the Iran talks" with Israel in retaliation for the Netanyahu government releasing secret details of the U.S. nuclear negotiations with Iran to the Israeli press.

Informed analysts have seen Netanyahu's speech as part of his re-election campaign in Israel. Writing in The Atlantic, Jeffrey Goldberg could find "no reason -- none, zero, efes -- to believe that [Netanyahu's] putative goal, to stiffen the spine of Congress in advance of a framework agreement, could not have been achieved a) immediately after the election; b) in intensive one-on-one, or one-on-two, or five, lobbying meetings with senators; or c) in a way that didn't so obviously disrespect the president of the United States, or place Democratic supporters of Israel in an atrocious bind."

Echoing Goldberg in Foreign Policy in a piece titled "Bibi The Bridge Burner," former U.S. Undersecretary of Defense Dov Zakheim wrote that Netanyahu "needs American support on a host of issues, not just the negotiations on Iran's nuclear program. ... It has depended on the Obama administration in particular to block United Nations recognition of Palestine as a sovereign state. Israel needs ongoing American support in the International Criminal Court to prevent Palestinian efforts to brand its leaders and military officials as war criminals. It needs American military equipment. It needs American dollars to buy that equipment. The list goes on. And on."

Zakheim warned: "Jewish-American support for Israel is strong, but not strong enough to overcome a determined administration. Never has been. And the majority of Jewish Americans are unhappy with some or most of the current Israeli government's policies."

In addition, the leaders of most of Israel's political parties have criticized Netanyahu for "endangering Israel's relations not only with the Obama White House ... but potentially undermining Israel's bipartisan support in Congress."

A recent Tel Aviv University survey found that a large majority of Jewish Israelis -- 67 percent -- think Netanyahu "is using a speech abroad to influence the election results at home."

U.S.-Israeli relations may very well return to their rock-solid heyday, but the danger for Israel is when the cumulative effects of repeated clashes with the United States transforms from one of a personality clash between an American and Israeli leader to one where the sense of value affinity between Israelis and Americans is eroded.

As former adviser to seven U.S. secretaries of state, Aaron David Miller, succinctly put it: "When the image of Israel as an ally of the United States changes in the mind of America, so too will the U.S.-Israeli relationship change -- for the worse."

[Jesuit Fr. Drew Christiansen is former editor of America magazine and a professor of ethics at Georgetown University. Ra'fat Aldajani is a Palestinian-American writer and commentator.]

Terrorism and resistance: the Hamas campaign against Israel