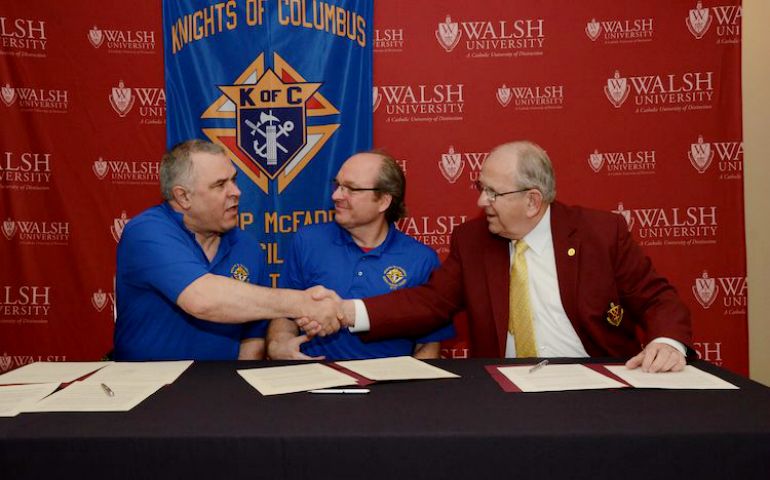 Jeff Weber and David Wechter of the Knights of Columbus, Bishop McFadden Council No. 3777, with Richard Jusseaume, president of Walsh University in North Canton, Ohio (Courtesy of Walsh University)
This article appears in the Campus Notebook feature series. View the full series.

Rensselaer, Indiana — St. Joseph's College alumni who helped raised $2.5 million to stop their school from closing will receive a refund after the college announced April 3 that it would surrender its accreditation status with the Higher Learning Commission, effective June 30.

According to a press release, surrendering accreditation allows the school to "preserve resources" and "prepare a path for a future partnership."

Instead of a refund, donors have the option instead of giving the money to the alumni association, which Involved for Life said would become an independent organization.

"We remained hopeful, until this news, that we could reverse the February 3 vote and replace the College's leadership," Involved for Life said in a Facebook post April 4. "We are all deeply saddened that the Board chose to go in a different direction, regardless of the popular sentiment of alumni, students, parents, faculty, staff, and the Rensselaer community."

New Rochelle, New York — James and Anne Marie Hynes made a $15 million donation to Iona College as part of the school's $150 million Iona Forever campaign to expand and enhance the business and science buildings and athletics center, to increase endowment, and to build a performing-arts center.

The donation, which will go toward creating the Hynes Institute for Entrepreneurship & Innovation that will allow students of all majors to take classes related to entrepreneurship and the global economy, is the largest of its kind in Iona College's history.

"We wanted to do something for Iona College that would have lasting and far-reaching benefits for all students, present and future," James Hynes, an Iona alumnus, said in a press release.

"For The Knights of Columbus, this partnership will strengthen their connection to the local community by creating a more visible presence in North Canton," Richard Jusseaume, president of Walsh University, said in a press release. "And for Walsh, the establishment of this scholarship will help to provide much needed financial aid for our students as they pursue their academic goals and personal development as leaders in service to others. This truly is a win-win for us both."

New York — For the past 15 years, U.S. News and World Report has named St. John's University as one of the top schools for campus diversity, reaching the No. 2 spot among national universities in 2015 and tying at No. 5 in 2016.

"Diversity is such a part of who we are, to a certain extent we take it for granted," Robert Mangione, provost and vice president for academic affairs at St. John's, told NCR. "Where other schools set diversity as a goal, we consider it our identity."

Preview this story from our subscribers-only Colleges and Universities special section.

The number of women serving as presidents of U.S. Catholic colleges has skyrocketed since 2000.

Of the 220 Catholic colleges and universities in the United States, 46 had female lay presidents in 2016, up from 19 in 2000, a 142 percent increase, according to the Association of Catholic Colleges and Universities. Male lay leadership increased 37 percent over the same period, from 65 in 2000 to 89 in 2016.

The surge in female lay leadership on Catholic campuses could offer insight into a changing educational landscape — one unlikely to falter in coming years, educational experts said.

Former NCR Bertelsen intern Traci Badalucco interviewed five of these female lay presidents and found a common experience among them: They all identified as beneficiaries of good female mentors, which they said was a key component in their far-reaching success and climb to the top of the educational sector.

A whole box of tools other than a gun

The ministry of burying the dead