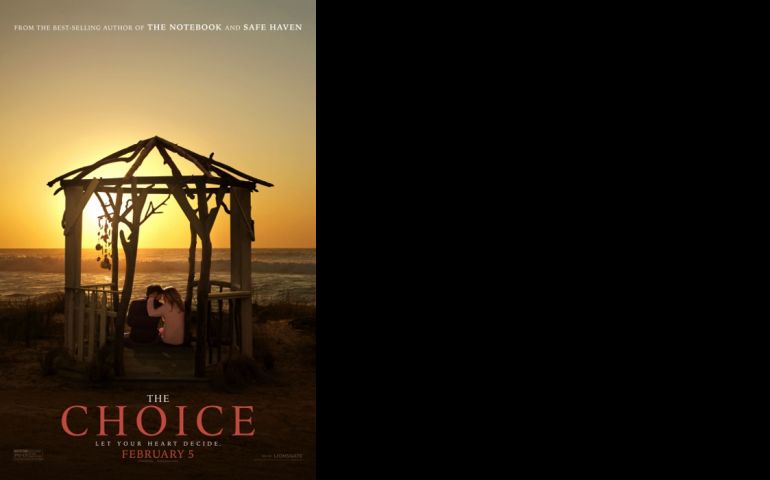 One summer in Georgia coastal Low Country, a young medical resident, Gabby Holland (Teresa Palmer), rents a house next to Travis Parker (Benjamin Walker) who parties late and loud and seems to have girls coming and going. Gabby wants to study and is not impressed; irritated by all the noise, she confronts Travis. Travis, with his lazy smile, is an inveterate flirt, but no amount of sweet-talk seems to get through to Gabby. At first.

When her boyfriend, Dr. Ryan McCarthy (Tom Welling) goes out of town for several weeks, Gabby and Travis become friendly. And then some. After several months, but for about two-thirds of the movie, they become engaged and marry. They speak about faith: Gabby is more traditional and Travis loves to contemplate the heavens. Their careers (he is a veterinarian like his father, played by Tom Wilkinson) are on solid ground, and two children follow very quickly. They work hard but Ben's long hours bother Gabby. Then something tragic happens -- and Ben is left with the most difficult choice a husband will ever have to make.

The Choice is Nicholas Sparks' 11th novel adapted for the screen. It looks gorgeous. The film showcases the South Carolina and Georgia's Low Country, where the view is breathtaking.

I interviewed Nicholas Sparks by phone about this latest production, which is his favorite, at least until the next film based on one of his books is released. I asked about the formulas he uses in his books as I did back in 2012 for "The Lucky One." At that time he described these as "a plot that moves through all life's emotions from loss, sorrow, jealousy, betrayal, sadness, tragedy, reconciliation, love to joy. He also said that there are three things that he insists on when his books are turned into movies: 1) That the spirit and intent of the story are maintained; 2) that the spirit and intent of the characters are maintained; and 3) that the filmmakers make the best movie possible.

Today Sparks added, "I tend to write stories that people will enjoy, stories that evoke the full realm of human emotion. Some might say I write love stories; others will call them tragedies or family dramas. The nature of what I write is in eye of the beholder, but for me they need to include a broad spectrum of human emotions and this means love, joy and sadness."

Sparks also said that he liked to keep some elements the same in all the stories he writes so that "readers will have some idea of what is coming, such as a love story in the South and a couple of flawed characters that they will hopefully like anyway. Some stories are written in first person, some in the third, and some both; some are short, others long; some are epic. But they all explore romance, danger and sacrificial love. The ages of the characters and time periods differ, and the endings are tragic, bittersweet and sometimes happy."

As far as I can tell, the audience for Sparks' movies is romantics who are mostly female, from adolescents to grandmothers. The sexuality in the films has gone from quite chaste ("A Walk to Remember") to what the Catholic News Service review described as "semigraphic" in "The Lucky One." He also told me in a previous interview that if there is a couple making love, it means that they will get married and stay together. I asked Sparks in this interview about this evolution and he said, "Most people understand that I try to write novels that feel authentic and honest to the world in which we live with the perspective that sex is a meaningful and sacrificial act of love.

"Most people know that the cultural norms in Hollywood have become more explicit. I try not to cast sexual encounters in a moral light but in the light of, 'So, that happened; now what?' I ask myself: How I can tell a compelling story that people will read or watch in an age when Hollywood is very graphic and relationships often filmed in ways that minimize the importance of sexuality, especially between married people? When it comes to sex, profanity and violence, many novels and films go a lot further than I do and they grab viewers' attention because they go so far. For me it's the difference between if you're in a car and you see a horrible accident versus when you drive home and nothing happens or see a car swerving ahead of you; how do you make the swerve as interesting as an accident? The accident is naturally compelling; it just is."

Regarding the faith expressed in the film, Sparks says, "Gabby and Travis are both believers but in different ways. This goes to my own thoughts about faith -- faith is a journey, faith waxes and wanes throughout our lives, there's a reevaluation about what faith means to people throughout the course of their lives, and in hard times, faith is tested."

Does Sparks write his novels in view of their becoming films?

"I conceive a story thinking that it might possibly be a film," he said, "but once I start writing it, it's only about the writing."

"The Choice" is a very watchable movie. The landscape almost overwhelms the acting, which, to tell the truth, does not even have to be that great because, from the first moments the chemistry between Walker and Palmer builds, and you can probably plot the story from your seat; it is predictable. It's a nice story about nice people trying to make their way in a beautiful world when something unthinkable happens.

But to Nicholas Sparks this story, as with his others, is a positive contribution to the culture. "In a world in which the news is filled with so many terrible things, it's always nice to go into a movie and escape for a little while and walk out feeling refreshed and energized."

To which Sparks replied, "Yes."

Culture | 'The Choice' film is a positive contribution to the culture

Links: Bishops, Communion and culture wars; getting tired of Twitter

Disney's 'Encanto' teaches us to see God in ourselves and others