Church must be more forceful in condemning Duterte's drug war 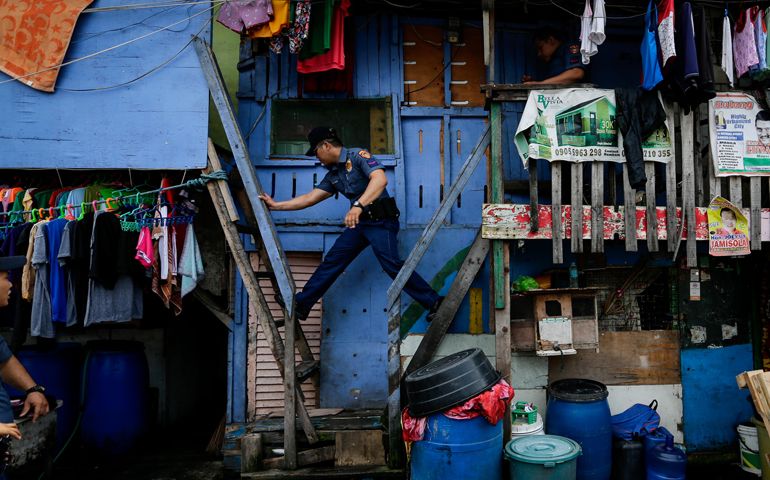 A Philippine police officer moves between houses in Manila during an operation against illegal drugs Oct. 6, 2016. (CNS/Mark R. Cristino, EPA)

Philippine President Rodrigo Duterte was elected this past May with a vow to kill drug dealers throughout the country. He has made good on that promise. By August, 420 had been killed. But those killed were not powerful drug lords. They were mostly poor Filipinos who had no discernible connection to the drug trade. There were no accusations or trials. They were simply shot down in the streets.

Duterte entered office with an 84 percent approval rating. He proclaimed that human rights "cannot be used as a shield to destroy the country." The wife of a victim said, "We're small people, insignificant. We may be invisible to you, but we are real."

The latest data indicate that the number of those killed has reached about 6,000. About 4,000 of those were killed by a team of "efficient killers," or what are more commonly termed death squads. There is said to be a list of one million drug dealers and corrupt officials. The list contains 6,000 police officers and 5,000 local village leaders. Many on the list have been seen as strong supporters of Duterte. It is unclear how one's name gets on the list or how it can be removed.

Sometimes there are more than a dozen killings a night, just in Manila. Even being innocent appears to be no defense. The police and army are not even involved in many of the killings. It is murder, pure and simple. Drug suspects are being killed by their peers.

Duterte has called both President Obama and Pope Francis "sons of whores." He called the U.N. high commissioner of human rights an "idiot." His approval rating currently sits at 86 percent.

A cardboard sign was left on the body of one of the victims. It said, "You are a pusher — You are an animal."

I think that comment epitomizes what is going on in the Philippines right now. People are being indiscriminately murdered in the streets of Manila and other cities. But really, these are not people. They don't count. They are invisible. They are poor. Their lives have no value. It doesn't matter what happens to them. They are not deserving of due process of law. If, in addition, there seems to be less crime, then we should all support this effort.

I thought we always preached on the worth, value, and dignity of every individual. Where is the Catholic church in this life and death struggle? Archbishop Socrates Villegas, president of the Philippine bishops' conference, said that "death by terror and violence … is a sin that cries to heaven for vengeance."

Yet the consensus seems to be that the response of the church has been tepid at best. Clergymen are saying they fear for their lives. Others say their reluctance to condemn is in line with the will of their flock. Many seem cowed by Duterte's 86 percent approval rating. When Duterte's popularity begins to recede, the church will become more forceful.

There is another issue that seems to temper the power of the church in addressing this crisis of life for so many young Filipinos. The hierarchy has pushed the government heavily to reject any availability of contraceptive services. The middle class and wealthy have had no difficulty obtaining contraception, but it is not available to the poor. The church is losing this battle with the people, and Duterte is a strong supporter of family planning. More than 50 percent of all pregnancies in the Philippines are unintended. The influence of the church in the Philippines is just not as strong as it once was.

Yet, if the church truly believes in a consistent ethic of life, it cannot hold back when so many lives are being summarily snuffed out every day. When the value of life is considered as nothing, then truly, these sins do cry out to heaven for vengeance.

Parents of victims will say that their children were innocent, but they support what Duterte is doing. What else could they say to protect themselves?

There is no one left to speak for these victims and their families. If the church remains silent the killings will continue, and a proud Asian democracy will be forever stained.