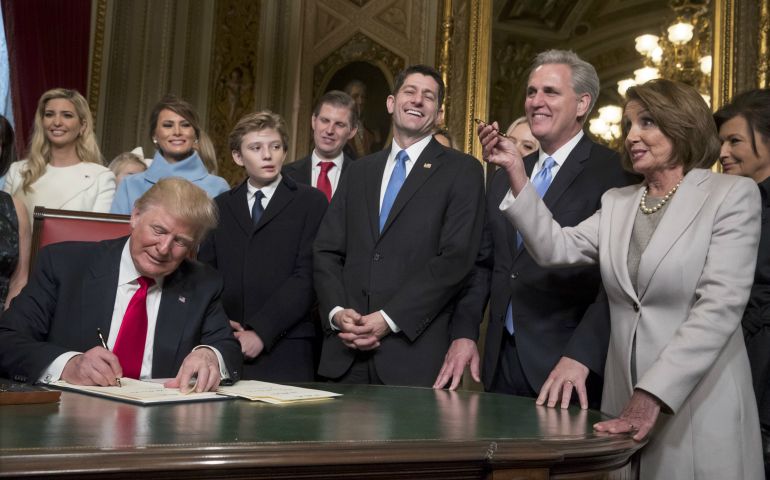 President Donald Trump is joined by the congressional leadership and his family as he formally signs his Cabinet nominations into law Jan. 20 at the U.S. Capitol in Washington. (CNS photo/J. Scott Applewhite, pool via Reuters)

The opposition to the new administration of Donald Trump is coming from a variety of places. Ongoing grassroots demonstrations are beyond what could have been foreseen, and rival the Tea Party demonstrations that erupted during the Obama presidency. Legal challenges to Trump policies are taking place in a variety of venues. The media seems busy holding the administration's feet to the fire.

The missing ingredient in this recipe seems to be the actual opposition party, the Democrats. Of course, their biggest problem is they just don't have the votes. The Republicans control the White House and both chambers of Congress. Yet there is also a sense that they can't decide on a strategy for opposing this president. Pressure is coming from many different directions, and they are lacking a unified voice and a comprehensive strategy.

The Democrats initially acquiesced to Trump's nominees for key cabinet positions. Nominees for secretaries of the Department of Defense and Homeland Security and director of the CIA were quickly confirmed. Now, the Democrats have started holding all-night rallies against almost every nominee and essentially voting in lockstep against each of them.

The pressure from the left seems to have forced a change in strategy. It is true that the foreign policy team Trump nominated was seen by many as superior to some of his other choices. Yet what does it mean that the party can be so easily swayed by this kind of pressure, and should they be?

Activists on the left seem determined to oppose the new president on every issue and in every way, just as Republicans did against President Barack Obama. As satisfying as this may be to some, it is not in the best interests of the American people. We have seen dysfunctional government for far too long now, and coalitions need to be built on infrastructure and other matters to make it possible to get things done. For starters that means being the responsible party in Washington, not the obstructionist party. Opposition will be necessary frequently with this administration, but Democrats do not want to be fighting this president even when they agree with him.

For Democrats, the goal needs to be winning back the Senate in 2018 and significantly reducing the Republican majority in the House of Representatives. Is outrage at every action and utterance of the Trump administration the best way to go about that? I think not. Many believe Hillary Clinton lost the presidency, in part, because she spent too much time attacking Donald Trump and not enough time listening and talking with Trump supporters.

There is much going on in this administration to be outraged about, and outrage is an appropriate response. However, it is not nearly enough. I believe Hillary Clinton's finest hour was when she went into West Virginia during the primary and sat down with angry voters. She listened and shared her views with this group, and she left with their respect if not their votes.

The populism of President Trump has struck a chord with many struggling Americans. Citing Trump's inadequacies will not change that fact. It is true that there is enough of a majority of American voters who are opposed to Trump to elect a more progressive president in 2020. However, that reality didn't work for Hillary Clinton, and it should not be counted on now. Candidates in Michigan, Ohio, Wisconsin and Pennsylvania need to get out there and listen to people and explain why they can do a better job than the current administration. They won't win everyone's vote, but they need to be seen as caring about everybody, with a plan to better address some of the concerns of Trump supporters.

I believe the far left poses a danger for the Democrats. It is unlikely that Americans are going to want to go from an extreme right-wing administration to an extreme left-wing one. The Democratic party needs to develop bold but mainstream policies that are doable, address the concerns of the American people and represent real progress without appearing radical.

Democrats need to go to all 50 states and listen. At this point, President Trump is doing a good job of self-destructing. Democrats need to show that they have a better agenda, one that will benefit all Americans.

I spoke with a Trump supporter the other day who is beginning to be disillusioned with the Trump administration. However, she said that things would not really be different if Trump had lost. Is that true?

Iowa caucus may belong to the most dedicated

The Al Smith dinner has not outlived its usefulness