'Do You Believe?' is not mainstream entertainment; it is mainstream Sunday school 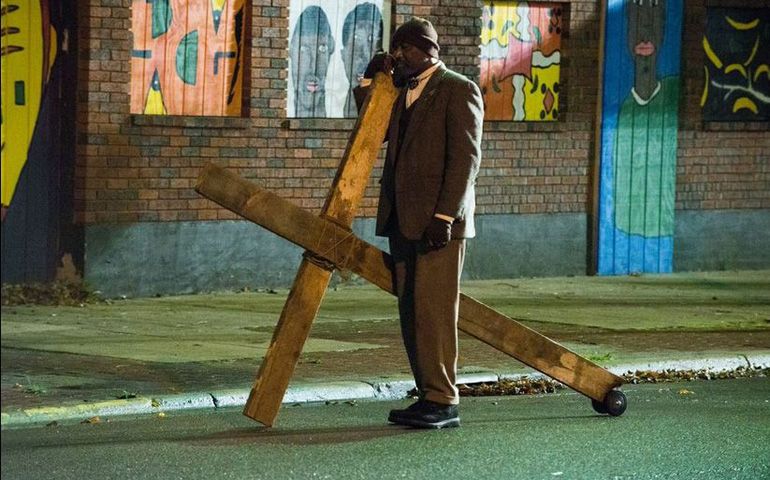 Delroy Lindo in "Do You Believe?" (Courtesy of Pure Flix)

Following up on their success with last year's triumphalist "God's Not Dead," screenwriters Chuck Konzelman and Cary Solomon have written "Do You Believe?", an interconnected drama for Christians that features 12 lives colliding in a life-changing event.

It is nighttime in downtown Detroit. A man, Malachi (Delroy Lindo), is carrying a large cross when he confronts a man in a car at an intersection. He asks: "Do you believe in the cross of Christ?"

The man, Matthew (Ted McGinley), says he is a pastor and nods his head as if to say, "It's kind of my job."

Malachi challenges Matthew: "If you believe, what are you going to do about it?"

This leads Matthew to reflect on the meaning of the cross, and he hands out many to those in his church on Sunday as he preaches forgiveness, unconditional love and assisting the many people out there who need help.

A husband and wife (Cybill Shepherd and Lee Majors) mourn the loss of their daughter years before and take in a homeless mom (Mira Sorvino) and her daughter (Makenzie Moss). Young men commit crimes, but one has a change of heart. A doctor (Sean Astin) does not believe in miracles. A lawyer (Andrea Logan White) goes after a paramedic for giving a cross to a dying man and speaking words of comfort to him. And so on and so forth.

"Do You Believe" is a Christian movie for a Christian audience. It is not mainstream entertainment; it is mainstream Sunday school -- which is fine if this is what you want to see at the movie theater. "Do You Believe" will not require much from your imagination because the filmmakers bring it all together for you. It is a well-crafted story with an excellent cast and fairly believable performances, especially from Sorvino and Moss. The movie has fine production values that reflect a robust budget. The story is not just about the individual and God, but about living faith in the wider community. The themes of grief, homelessness, forgiveness, the Christian meaning of life, and helping the poor are all there, tied up in a finale that inspires.

I really don't know why I am even writing a review of "Do You Believe?" because it is what it sets out to be and what Christian audiences have come to expect and celebrate. It is a Christ-centered Pure Flix production aimed at the generic Christian audience, made "for the sole purpose of changing our culture for Christ, one heart at a time." It's right on the nose. As to whether or not it will change the culture for Christ, well, how do you measure that, exactly? By box office receipts? By the number of tickets churches buy up and give away?

This is not to say that Catholic Christians and others will not be moved by the film should they choose to see it. There is certainly an audience for films such as "Do You Believe?" But the lack of a sacramental life in "Christian" films primarily made for the Protestant Christian audience always makes me feel as if something is missing -- and it is.

As I have said before, Sunday-school movies that preach good messages are fine, but they are illustrations of faith. They tell you what to do. I am interested in films that tell stories about the rest of the week for the rest of the audience, films that artistically engage my humanity, spirit and imagination, films that trust me to make my own meaning and not have it imposed, however nicely wrapped and tied up with a bow and accessorized by a cross.

Here are some mainstream movies that tick all my boxes for inspiration: "Dead Man Walking" (1995), "Of Gods and Men" (2010), "Lilies of the Field" (1963), "Fiddler on the Roof" (1971). I remember so well "A Man Called Peter" (1955), the life of Peter Marshall, a Presbyterian minister who became chaplain to the U.S. Senate in 1947. I saw the film on television when I was about 12 years old, and I was so impressed I went to the library to get the book on which it was based. (It was written by Peter Marshall's wife, Catherine, who went on to write Christy, which became a popular miniseries in 1994 starring Kellie Martin.)

Culture | 'Do You Believe?' is not mainstream entertainment; it is mainstream Sunday school