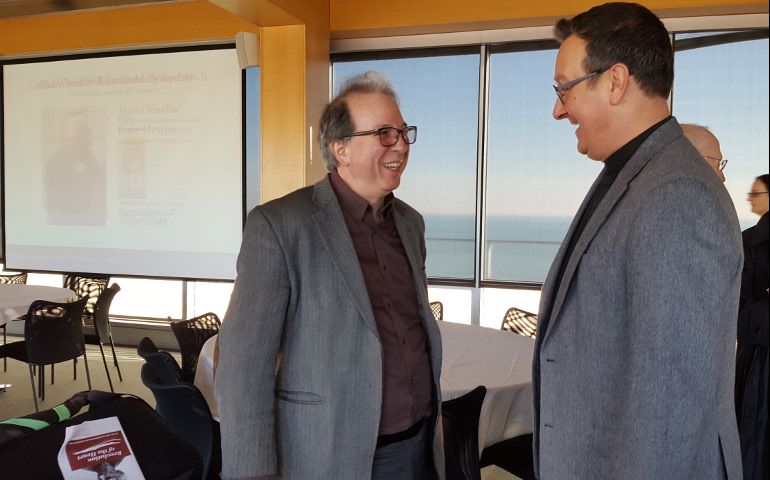 Chicago — Dorothy Day and Pope Francis are "kindred spirits," the editor of Day's diaries and letters told a symposium about the Catholic Worker co-founder, noting similarities in her "revolution of the heart" and his "revolution of kindness."

"Despite their differences, they both obviously read the same Gospels — and read them through a Franciscan lens," said Robert Ellsberg, editor-in-chief and publisher of Orbis Books.

Ellsberg gave a keynote address Thursday at Loyola University Chicago to kick off a two-day symposium named for one of Day's most famous quotes: "The greatest challenge of the day is: how to bring about a revolution of the heart."

"Revolution of the Heart" continues Friday at the university's lakeshore campus.

Both Day and Pope Francis share a focus on the poor — and have been criticized for that stance, an "inevitable reaction when Christians go beyond feeding the hungry to ask why there are so many poor people," Ellsberg said.

Ellsberg would have loved to have told Pope Francis about Day during the pontiff's visit to the United States in September 2015, but it wasn't necessary, he said. Pope Francis mentioned Day during his remarks to the U.S. Congress, urging political leaders to continue to fight poverty in her name.

"What if I could have told Dorothy Day about Pope Francis?" Ellsberg wondered. He recalled that despite her respect for priests, Day could be critical of ecclesial trappings of power and privilege. "How she would have delighted in Pope Francis!" he said.

Day would have agreed with the pope's concern about the "globalization of indifference," Ellsberg said, and they both recognized the value of small gestures in making a difference.

When he first met her, he asked Day how she could reconcile Catholicism with anarchism. "It's not a problem for me," she told him. "She was not interested in abstractions," Ellsberg recalled.

He credits Day with helping him find his vocation as an editor, recalling her advice that "you'll know your vocation by the joy it gives you."

"More than 40 years later, I'm still wondering what hit me," he said, adding that he's still working on learning how to love with compassion and overcome fear, as she taught him. "Some lessons we never really finish."

Editor's note: NCR will be blogging and tweeting from the conference on Thursday, Feb. 16 and Friday, Feb. 17.