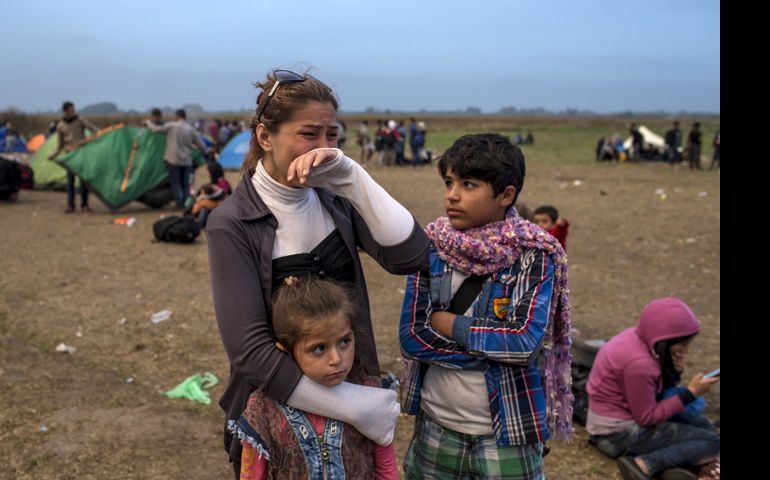 A migrant from Syria cries as she stands with her children on a field after crossing into Hungary from the border with Serbia near the village of Roszke Sept. 5. (CNS photo/Marko Djurica, Reuters)

Spending part of my sabbatical in Europe, I am witnessing firsthand the impact of the refugee crisis, the largest human migration witnessed on the continent since 1945. Normally open borders are now restricting access, there is a strong military presence in train stations, and the issue of asylum-seekers has emerged as a major topic of conversation everywhere.

My daughter, who was traveling with us, altered her plans in order to go to the Greek island of Leros to volunteer in support of refugees. The stories she is telling are heartbreaking, including the loss of the three dozen refugees who drowned en route to the island from Turkey.

Many of the refugees -- particularly those from Iraq and Syria -- are well-educated and are not among the most impoverished. They include doctors, lawyers, and professors, forced to flee when threatened by members of ISIS, which has seized many of the urban areas of northeastern Syria and northern Iraq. Indeed, the poor cannot afford the costs of the smugglers who often charge exorbitant rates to transport them from the refugee camps in southeastern Turkey to the country's west coast and place them on the boats to make the crossing to Greece.

Seven and a half million people (more than one-third of Syria's population) have been displaced, with over four million fleeing into exile. However, only about 150,000 -- well under 4 percent of the total -- have attempted to enter Europe.

Indeed, as much attention as there has been on the impact of the influx of refugees on Europe, the fact is that Turkey, Lebanon, and Jordan -- which have less resources or infrastructure to deal with such a demographic burden -- are caring for far greater numbers of refugees, both proportionate to their populations and in absolute numbers, than any European country. Turkey is hosting nearly two million refugees. Lebanon, whose total population is only 4.5 million, has taken in 1.2 million Syrians. Jordan (population 6.4 million) is hosting 650,000. Indeed, these countries and other Middle Eastern states have taken in 95 percent of the Syrian refugees.

The office of the United Nations High Commissioner on Refugees, the World Food Program, and other U.N. agencies were totally unprepared and are seriously underfunded.

This sudden influx of asylum-seekers has led to some xenophobic backlash. Yet European fears of some kind of Muslim takeover are completely unfounded. For example, even if all four million Syrian refugees came to Europe and all of them were Muslim, it would raise the Muslim population on that continent from 4 percent to only 5 percent. And even though the birthrate among European Muslims is slightly higher than non-Muslims, birth rates decline as the standard of living and education rises. Furthermore, Syrians are already well-educated and their birthrate is comparable to that of many European countries.

Influential anti-Islamic forces in the United States are doing their best to stoke this paranoia, however. In a recent segment headlined "Terrorists Inbound? Taking in Refugee Could Open Doors to Jihadists," Fox News showed what they claimed to be a "new video" of young men on a European train shouting "Allah Akbar" ("God is Great! ") The bizarre aspect of this reportage is that not only do plenty of non-terrorists Muslims chant that slogan (they could have been celebrating a soccer victory), the film clip was actually from 2010, long before the current refugee crisis.

Refugees who become immigrants have a lower crime rate than the native population. When allowed to integrate, they tend to become productive citizens, start small businesses, and put a lot more money into the social system than they take out. The large numbers of professionals among the Syrian asylum-seekers could be an asset to the aging European population. A related issue is that the birthrate in most European countries is so low that, without immigrants, the continent would actually lose population, some countries by double-digits within the next 30 years.

Many of the refugees crossing into Europe are from Iraq, Afghanistan, Libya, and Somalia, all countries where the violence and turmoil are attributable primarily or at least in part as a result of U.S. military intervention. The breakdown of authority in Libya and the ensuing violence following the NATO-backed overthrow of the Gadhafi regime in 2011 has not only forced many Libyans to seek sanctuary, but has made that country an available exit point for refugees and migrants from impoverished and conflict-prone parts of Africa.

The majority of refugees are Syrians, many of whom are escaping the savage bombardments and political repression of the Damascus regime, but perhaps at least as many are fleeing from the so-called Islamic State, the Iraqi-led Islamist cult which was a direct outgrowth of the 2003 U.S. invasion of Iraq.

As a result, it would not be unreasonable to assert that the United States is ultimately responsible for much of the refugee crisis.

Despite this, Washington has agreed to admit only 10,000 of the refugees, leaving other countries to face the burden of dealing with the consequences of U.S. policies. In one sense, however, this is not new. The United States is still deporting Central Americans and Mexicans fleeing north to escape the impact of other U.S. policies, including the Cold War-fueled violence of the 1980s and subsequent neoliberal economic policies and the militarized drug wars.

In the face of the ongoing tragedy in Europe, outstanding examples of human compassion have emerged. Most of the support has come from ordinary citizens, not political leaders. Greeks, despite struggling under desperate economic conditions themselves as a result of EU-imposed austerity measures, have been extraordinarily generous.  Even in Hungary, where the right-wing government has imposed the most draconian measures against asylum-seekers, thousands of Hungarians have donated food and clothing to assist the refugees.

Pope Francis has called for every parish on the continent to provide support for at least one refugee family. Indeed, the outpouring of support throughout Europe has been inspiring.

It would be nice, however, if the United States, which has been willing to expend massive amounts of resources to promote war in the Middle East, would be willing to provide even a modest proportion of that in support for its victims.

[Stephen Zunes is a professor of politics and coordinator of Middle Eastern studies at the University of San Francisco.]

Greek Council for Refugees speaks with NCR about migrant crisis