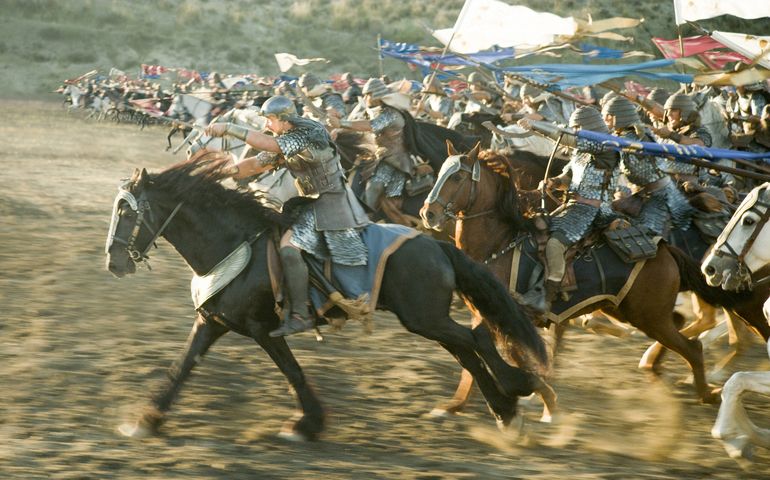 Director Ridley Scott's most recent epic, "Exodus: Gods and Kings," attempts to tell the biblical story of Moses from about the time he learns he is a Hebrew until he receives the Ten Commandments on Mount Sinai. It concludes with him as an old man, riding in a cart with the Ark of the Covenant, as the Hebrew people wander in the desert.

I use the word "attempt" because the film is an artistic extrapolation of the scriptural texts that shows the obvious and makes up or simply leaves out what the filmmakers don't seem to be able to grasp or think is important. The film emphasizes Scott's imagining of the visual spectacle of the most obvious elements of the exodus (Exodus 12:31-14:29) on a scale that leaves Cecil B. DeMille's 1923 silent "The Ten Commandments" and the Oscar-winning 1956 remake in the dust.

Moses is certainly the central character in the story, but he is not like any Moses we have seen before. He has never been thought of as a military man and a warrior to believers, but as a leader. Here, Scott conflates these elements into Moses' persona. Perhaps Scott and the four writers of the script (Adam Cooper, Bill Collage, Jeffrey Caine, Steven Zaillian) don't think the contemporary audience can understand spiritual struggles and challenges, mystery and miracles, without the blatant assault on the senses of cinematic military conflict.

The film opens with Pharaoh, or Seti (John Turturro), giving almost identical swords to his son, Ramses (Joel Edgerton), and his nephew, Moses (Christian Bale). Seti then switches them, telling the young men to fight to save the other's life in battle.

Meanwhile, a priestess predicts that someone will save the leader's life and will become the leader. Moses and Ramses were brought up together and are like brothers. This oracle creates tension between them -- you know, sibling rivalry.

When they return from battle, Seti tells Ramses to go to Memphis to check out a corrupt viceroy (Ben Mendelsohn) in charge of the Hebrew slaves building the city. Ramses doesn't want to go, so Moses does. He sees the suffering of the Hebrews. He meets a young Joshua (Aaron Paul) and his father, Nun (Ben Kingsley), who tells Moses what he has suspected all along: Moses is not who he thinks he is. He is a Hebrew. Nun gives Moses a cord that was on him when he was found floating in a basket as a baby.

This information leads Moses to a confrontation with Ramses; his adoptive mother, Bithia (Hiam Abbass); and Miriam (Tara Fitzgerald) that leads Moses back to Nun, who explains more. As he exits Nun's dwelling, an Egyptian soldier attacks Moses, but Moses kills him. Ramses then banishes Moses to the desert.

Moses walks for a long time until he comes to an oasis, where he encounters Zipporah (María Valverde), daughter of Jethro (Kevork Malikyan), who are shepherds. Moses marries Zipporah, and they have a son, Gershom (Hal Heweston). They are a very close family.

When Moses chases sheep that have strayed up the mountain, he is caught in a mudslide. From the mud, he sees a burning bush with a young boy, Malak (Isaac Andrews), who talks about the suffering of the Hebrew people.

If you are familiar with the Book of Exodus, you can see that Scott's version follows the narrative in broad strokes but not closely, and in fact makes some changes. Take the cord that Nun presses into Moses' hand.

Rabbi Yitzchok Adlerstein, interfaith affairs director at the Simon Wiesenthal Center in Los Angeles, was also present at the screening I attended. He said he came to the conclusion that the cord was probably a superstition that traces back to Kabbalah, the mystical interpretation of the Scriptures. The character Malak makes piles of small stones throughout the film, and Adlerstein did not know the significance from the perspective of Orthodox Judaism. I wonder if it's not another superstition related to a misinterpretation of Kabbalah -- otherwise, I have no idea what this motif means.

Although Rabbi Adlerstein complimented the cinematography and special effects, the larger problem for him is Malak, the "boy" who speaks for God and is harsh in attitude and word to Moses. Malak has the exact temper of the Old Testament God who prevails in popular culture, but not in the minds and hearts of believers.

"Ramses has more compassion than this character," Adlerstein said. He rejects that the boy could be an angel -- though there is mention of an angel in the Elohist version of the Scripture -- or God, who would never have been visible.

This child God/spokesperson for God of the movie behaves like he deserves a good thrashing. He's not into freedom, compassion or justice -- just into forcing compliance through demonstrations of power. Enlightened human parents know better than to act that way to their children. That is not what God is about, nor the story. The God of the Bible pampers the Egyptians with warning after warning, chance after chance, before the pyrotechnics begin. There is gradation to the plagues, first affecting convenience and property, rather than inflicting pain or loss of life. He responds to the cries of people, not to his LinkedIn popularity profile. He wants people -- both Israelites and Egyptians -- to understand his uniqueness, his compassion and love, as well as his justice. Moses relates to him closely and personally when he wishes, rather than waiting in the dark for a clue.

The episode of the burning bush in the film was the greatest disappointment to me. In Scripture and in DeMille's version, this is an epiphany, yes, but one where Moses "sees" God through his soul and is changed. It is one of the most startling and profound mystical moments in Scripture. Yet here, Moses is mired in mud, as if he had been hit on the head. He does accept the mandate the boy gives him, however, and begins his journey back to Egypt.

The next major problem for me was the Passover. Though Moses tells the Hebrews to kill a lamb and brush blood on their doors, he barely explains why, though he does say that in years to come, we will remember the blood of these lambs. There is no gathering of families, no unleavened bread, no preparation for the journey. When Ramses finally commands the people to go, they slowly plod forth, by now 400,000 strong.

The plagues are well crafted and menacing, but Scott makes sure there is a natural explanation to what happens. Alligators attack people in the river, which causes the river to run with blood. And the plagues begin. With the deaths of the first-borns of the Egyptians, we get a hint, finally, of God's favor for the Hebrews when Moses tells Ramses quietly that none of the Hebrew children died that night.

It would be easy to go on and on with what was missing or remade in Scott's image, but this probably would not be as helpful as encouraging people to go back to the Scriptures and read the Book of Exodus, imagining for themselves the mystery of how things may have happened.

As the movie ended and the credits rolled, noting all 15,000 people who worked on the film, everyone in the theater stayed in reverence. I think this is because despite the minimization of divine intervention in what is foundational and arguably one of the most significant and vivid stories in the Bible, inspiration does emerge from the story and the Moses character. Moses, who refused to ever be humbled, ultimately surrenders to God. He frees his people from bondage and leads them to freedom.

After this momentous liberation of the Hebrew people, the importance of the Book of Exodus in terms of the giving of the Ten Commandments through Moses and how the people would worship the Lord is missing. This moment is almost a footnote. Those who know the story of Exodus will be disappointed in Scott's version, I think, even though the acting is excellent, the music beautiful and expressive, and the visuals stunning. It barely concedes the miraculous.

Someone at the screening said Scott wanted to make a different movie than those that came before, including "Prince of Egypt" in 1998. He surely succeeded. I choose to think of "Exodus: Gods and Kings" as Ridley Scott's personal vision of God and his wrangling through his art with the consequences of what saying "I believe" means.

Culture | 'Exodus: Gods and Kings' is stunning but barely concedes the miraculous