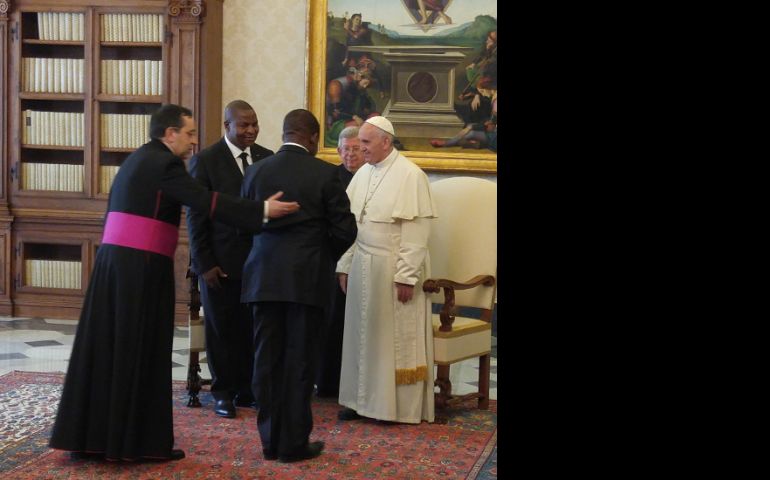 Vatican City — Only five months ago, Pope Francis did what many thought to be impossible. He flew into the conflict zone of the Central African Republic, declaring to the combatants, amid armored tanks and bulletproof-vested guards: “Lay down these instruments of death!”

On Monday, the country’s new president, Faustin-Archange Touadéra, made his first visit abroad to see the pope at the Vatican. Touadéra, who took office March 30, came here with the explicit purpose of thanking Francis for his personal push for peace.

Much more than most official visits to the pope’s apostolic palace, Touadéra’s was very simple. The president, whose country is ranked among the ten poorest in the world, had no gift to give Francis. He brought with him only four people in his official entourage.

Francis met Touadéra outside his office, taking his hands in his and saying softly in French: “Mr. President, welcome.” The two met privately only for fourteen minutes. As the pope gave the president three books (likely his two exhortations and the encyclical Laudato Si’), Touadéra bowed deeply several times.

As we in the press left the room, an attendant began to pass out rosaries -- just a small gift, emblazoned with the pope’s seal, to remember the day. Several of us gave ours to a reporter who had traveled from the Central African Republic, who said he would bring them to his mother and relatives.

A state visit of which there is not much to report. But perhaps the visit itself is worth the report.

Prayer is source of strength in darkest times, pope says at audience

Pope Francis says he has asked to meet Putin in Moscow