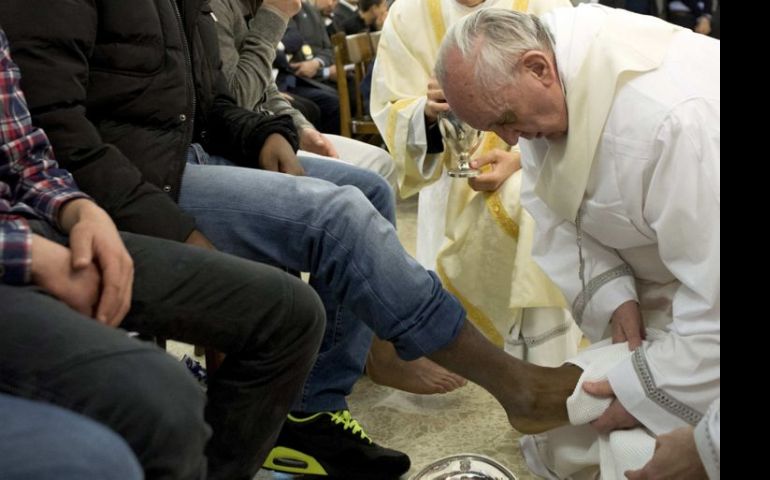 In yet another rich use of symbols, an emerging preaching pattern of Pope Francis’ pontificate, he included women and Muslims in one of the most important liturgical celebrations in the Catholic calendar year.

Kneeling at the feet of 12 juvenile inmates in a Rome detention center, he washed and kissed their feet.  The group included two women and two Muslims and ranged in age from 14 to 21.

Francis’ calls to humility and service have been two hallmarks in is young pontificate.

“There is no better way to show his service for the smallest, for the least fortunate,” said Gaetano Greco, a local chaplain.

Media was restricted during the ceremony.  None of the juveniles was identified, nor were their faces visible at any time.

Earlier in the day at the Chrism Mass, in which oils are anointed, Francis addressed the gathered clerics and urged them to prioritize the poor and to shake themselves out of lethargy to become “shepherds living with the smell of the sheep, shepherds in the midst of their flock."

Some Catholic traditionalists are likely to roll their eyes seeing the pope include women at the feet washing ceremony, which commemorates Jesus’ washing the feet of his disciples. Some might also question the pope’s inclusion of Muslims in the ceremony.

Francis, however, has already gained a reputation of disregarding church protocols.  He will be the first pope not to live in the plush papal apartments in 110 years, choosing rather to live in a suite inside the Vatican guesthouse.

While many Catholics wonder how Francis’ use of symbols, aimed at preaching mercy and inclusion, will be translated into decisions within the church, there is little question he has already set a radical new tone throughout.

Images of Francis washing and kissing the feet of young Muslims are circulating the globe, sending messages well beyond the church.

After he took the name Francis, after Francis of Assisi, commentators were quick to note that his namesake not only cared for the environment, but also sought peace, especially with warring Christians and Muslims.

The story is told, sometimes embellished, that in 1219, as the Fifth Crusade was being fought, Francis crossed enemy lines to gain an audience with Malik al-Kamil, the Sultan of Egypt. The two, the story goes, talked of war and peace and faith and when Francis returned home, he proposed that his Order of the Friars Minor live peaceably among the followers of Islam.

That the narrative and image of the earlier Francis seeking harmony with Islam has lasted more than 700 years speaks to the power of symbols, an insight apparently not lost on today’s Pope Francis.

[Thomas C. Fox is NCR publisher. He can be followed on Twitter @NCRTomFox]

Where Pope Francis stands when it comes to women

Women may come out winners in the Synod for Africa