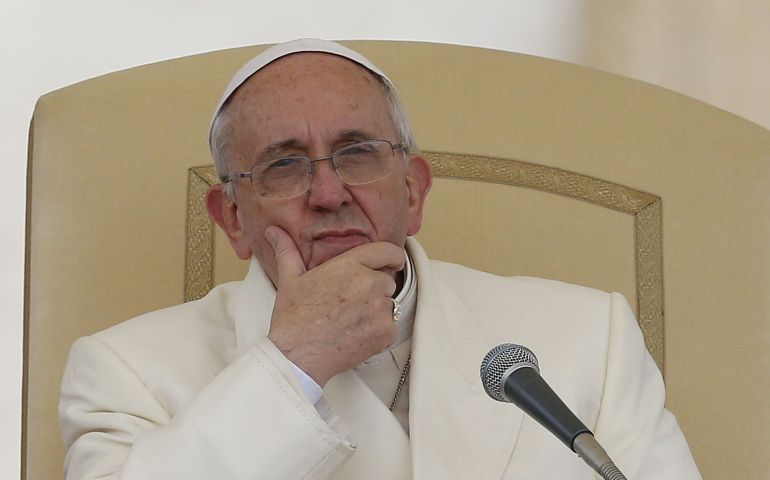 As Pope John Paul was to evangelization and Pope Benedict to theology, Francis is to reaching out to the needy of the world.

Each approach characterizes a pope and pontificate, each a part of a larger whole, fulfilling the mission of the church.

From Francis’ viewpoint, to feed the hungry, cloth the naked, and to comfort the afflicted are at the core of Beatitudes; it means doing God’s work. It means evangelizing and doing theology.

Francis brought his view of mission and church with considerable urgency to the World Economic Forum meeting in Davos, Switzerland last week. In a letter read to the gathering, he encouraging the “haves” of the world to do much more on behalf of the “have-nots.”

His words were firm and from the heart. At the same time he sounded more like a coach encourage his team than a finger-pointing nag.

“Trusting that the meeting will provide an occasion for deeper reflection on the causes of the economic crisis affecting the world these past few years,” he said, “I would like to offer some considerations.”

“Modern business activity,” he said, has helped bring these changes, “by stimulating and developing the immense resources of human intelligence.”

But the team needs to do better.

“Nonetheless,” he went on, “the successes, which have been achieved, even if they have reduced poverty for a great number of people, often have led to a widespread social exclusion. Indeed, the majority of the men and women of our time still continue to experience daily insecurity, often with dramatic consequences.”

Disparity is much on the mind of the pontiff, the first from the Global South.

He called for more inclusivity, “which takes into consideration the dignity of every human person and the common good. “

“I am referring to a concern that ought to shape every political and economic decision, but which at times seems to be little more than an afterthought.”

The business world, he said, must be more responsible for “those who are most frail, weak and vulnerable. It is intolerable that thousands of people continue to die every day from hunger, even though substantial quantities of food are available, and often simply wasted.”

“I know that these words are forceful, even dramatic, but they seek both to affirm and to challenge the ability of this assembly to make a difference.”

The depths of the disparities of which Francis spoke were highlighted by a study released at Davos that found the richest 1 per cent of the world owned $110 trillion in wealth -- 65 times the total wealth of the bottom half of the population and that the bottom half of the population owned about $1.7 trillion, or about 0.7 percent of the world's wealth. That's the same amount as owned by the 85 richest people, the report said.

The pontiff's words largely replicate the critique of capitalism he offered in his apostolic exhortation last November in which he wrote: "Today everything comes under the laws of competition and the survival of the fittest, where the powerful feed upon the powerless."

Francis has shown he sees the mission of the church directly involved in world matters The church, of course, has always been involved. But with this pontiff, there is a sharper focus.

In his short ten months as bishop of Rome, he has become the primary spokesperson for the billions who lack adequate food, health care, and shelter. Those on the “peripheries.”  The center of our church has shifted dramatically and --likely permanently – catching up with a world that has already long since moved its center, if not its resources.

North Carolina parishioners clash with pastor, petition for his removal

Again the call for bi-partisanship