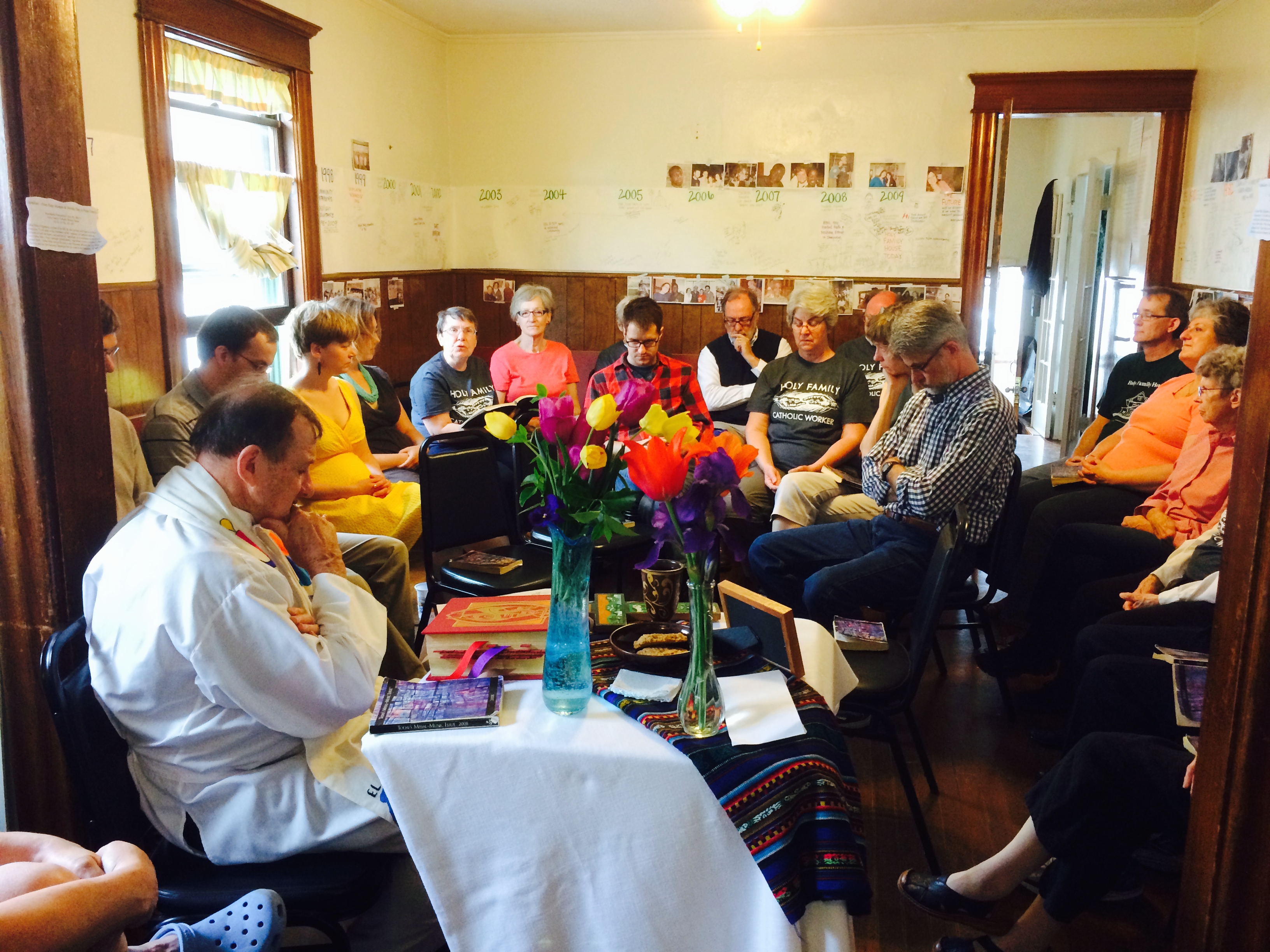 Angie O’Gorman was about to sit down at one of the tables in the Holy Family Catholic Worker house in Kansas City, MO, which she had years back founded, and in which on this Sunday scores of guests and friends had come as part of a 40th anniversary celebration.

The crowd, made up of supporters in their twenties through their nineties, had packed into two small rooms and had been sitting around Waris, who celebrated mass with the aid of a small metal table covered with a cloth and adorned with two vases of fresh cut flowers.

Seemingly against all odds this inner city Kansas City Catholic worker house has made it now through four decades.

It was a time to celebrate.

Friends and guests gathered for story telling and a picnic Saturday and many returned Sunday for the prayer service and a brunch, served at the same tables at which countless thousands over the years have filled their stomachs and tangled needs for social acceptance and love.

Gorman, reflecting back four decades recalled the name “Holy Family” was chosen because until 1974 there had been no place for homeless and otherwise needy families to stay in.  “At that time men went to one place, women and children to another. We felt this was not good for the families, especially at times when they might be vulnerable and fragile,” Gorman said.

Gorman worked at the house from 1974 until the early 1980s, eventually leaving to further her studies

Asked how she felt thinking back to the founding of the house, which followed a request by Dorothy Day, Gorman said she carries a sense of satisfaction, thinking she was able to set a tone, a spirit at the beginning of the Holy Family journey.

It’s been a spirit characterized by Catholic Worker simplicity, openness, hospitality, and peacemaking.

Dozens of Catholic Workers have followed Gorman over the years. They’ve provided service while living in one of two adjacent, modest houses – jut west of Troost on 31st street in Kansas City, MO.  Some have stayed for weeks, others, months or years.  They’ve almost always shared a prayerful common purpose – joining a sense idealism with efforts to the Beatitudes in community.

One of the houses contains three dining rooms and the kitchen on the first floor.  Through much of Holy Family’s history staff members have lived on the second and third floors in small rooms.  The other house has usually been available for families in need of temporary housing.

On this Sunday, Divine Mercy Sunday, as food was being served in a festive environment, someone called out for a group photo, and after a few minutes of light chaos the gathered finally agreed on the wall against which to shoot the photo.

Sitting quietly, well accustomed to the noise and bustle, was Christian Brother Louis Rodemann.  No one has embodied the house – its simply lifestyle, its sense of service --  more than “Brother Louie,” a soft-hearted man of thin frame who can be tough when required.

Louis has been serving meals and providing Holy Family hospitality since the early 1980s. That’s when he first began his work at the house, going through dumpsters looking for food that could be salvaged for the hungry.

And so, for four decades Holy Family has managed to keep its doors open for continued hospitality. It’s been a miracle of sorts, but one made possible through the work of volunteer from area parishes and countless food donations from grocery stores and restautants.  Clothes show up and are gathered from used clothing shops, and cash donations seem to find their ways to the house.

Holy Family is now a Kansas City landmark. And more: It is a living witness – a most nourishing one – that the Gospels can be lived – indeed, are being lived! And it’s happening day after in a kind of ragtag community characteristic of the Catholic Worker movement.