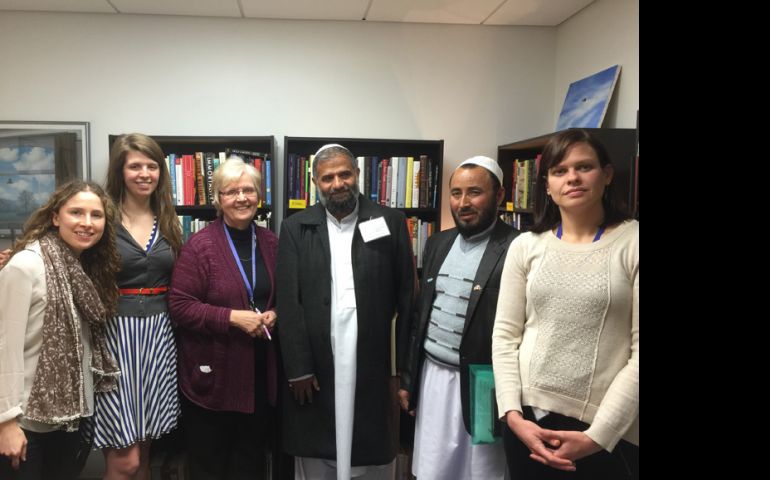 About two weeks ago, I received an unexpected phone call from a man who runs the Institute of International Education and brings visitors here for the State Department. He was organizing a series of meetings for a group of Afghan clerics coming to the United States to look at interfaith relations and interfaith dialogue in the American context.

“Would I be willing to meet with them?” he wanted to know. “Of course, I would,” I replied.

And yesterday, the delegation arrived at my offices. There were four clerics (two Sunni Muslims and two Shia Muslims), two translators, four of my board members, my producers for Interfaith Voices and myself.

I frankly did not know what to expect, but it was a very friendly and hopeful meeting. As it turns out, one of the imams has his own radio show in Afghanistan — relatively new, but interfaith in scope — and he was very interested in Interfaith Voices. Several in the group shared the fact that Afghanistan used to have a more diverse religious population than it does today … not only Muslims, but Jews, Christians and others. The radio host seemed anxious to revive a good sense of interfaith understanding through his show. So we exchanged information, and said we would be open to collaboration if we can figure out how to handle the language barrier (they speak Dari).

All of the imams professed an interest in women’s advancement in Afghanistan. One imam said they have formed a “Brotherhood Council” to promote the idea. To be a member, a man must have only one wife (!) and have done something to promote the welfare of women. When I suggested that they needed a “Sisterhood Council,” they immediately caught on! And of course, I mentioned that Muslims are not alone in the quest for women’s rights. We do not yet have women priests in the Roman Catholic Church.

Overall, this conversation was much more hopeful than I expected, given the news that is constantly streaming from that part of the world. Although I suspect that these particular clerics may be a bit more progressive than most, it is good to know that they are working for goals we share: especially interfaith understanding and an appreciation of the diversity in our world.