The news, expected but dreaded, began to leak out on Facebook on Saturday night. Joshua Casteel had died earlier that day. He was 32. And the postings, which seemed endless, as well as those on the site of the Iraq Veterans Against the War and on Pax Christi USA all seemed to ache in trying to say some version of the same thing: How do we tell those who should know about this life of grace and courage, of holiness and unending search, of both consummate resolution and relentless questions? How did he fit it all into such a short time, and how do we explain that the world -- the church, the state and beyond -- needs to know of this life? 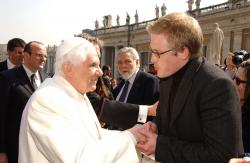 I have often been grateful that along the way of a journalistic career, one that by nature can be contentious, I have experienced a fair share of those interviews that have resulted, in the words of a favorite pastor, in "a little lift to God."

Interviews often poke and prod. Sometimes they can be less than gracious; often they are merely in search of information, confirmation of data or clarification. And then there are those moments when someone speaks a bit of wisdom, hands off a deep insight, recalls an experience that inspires -- call it all a bit of grace, a lift in the right direction.

Far rarer is that encounter that shakes the foundations, that brings one up against the force of a life that, by its very nature, turns the questions back on the questioner. So it was with Joshua Casteel.

I met him sometime during 2010 at a Pax Christi convention (the wheres and whys of which, I no longer recall). I heard him speak for about 15 minutes. It was not unusual fare for Pax Christi, but there was something riveting about this 29-year-old, an authenticity about a search that was ongoing, that was as deeply religious, even Catholic, as it was political and literary. It was a search, I perceived, that had apparently already bared deep layers of his soul to himself.

We chatted a bit outside the main hall. He was agreeable to a lengthier interview. We would make arrangements.

I traveled that August to Iowa City and the University of Iowa, where the soldier/writer-turned-nonviolent-believer was doing grad work in nonfiction writing. I spent the day with him, and I asked him questions and listened to his story almost nonstop -- in a coffee shop, on walks around the campus, for hours in a quiet library room. This young man, so deeply read, so full of energy and ideas and creativity, lived at the intersection of demanding and difficult questions. He smiled a lot, he joked, he had what one might term an easy affability. But deep inside, something generated a seemingly endless stream of questions and an insatiable need to understand and to synthesize everything he was taking in. I can't pretend I knew Josh very well beyond that interview. I certainly didn't know all the corners of his life. I am convinced, however, that encountering his story brings one in touch with an unusual example of sanctity.

After a break, we went to dinner with his father, Rick, and mother, Kristi Jean, and they spoke of their conversions to Catholicism that paralleled their son's discovery and his journey to Rome from nondenominational Evangelical Protestantism.

The story that resulted ran in January 2009. His father died of cancer at age 60 a little more than a year later, in February 2010.

Josh and I were in touch again in November. He was by then living and teaching in Chicago and he was thinking of taking time off, he said in an email, "to focus more on speaking and writing, as well as begin what I hope will be the launch of a Catholic media company, a tripartite organization dedicated to the intersections of theatre, film and literary publishing."

It was the same month, I was to learn later, that he was diagnosed with what reports have termed "stage IV lung cancer." It was only through occasional looks in on his Facebook page that I followed his battle with the disease. If the family publicizes funeral arrangements, I'll pass them along.

Read my original story on Josh here: Once a soldier, now he's fighting Caesar
Here is the story of the conversion of his family: A family's conversion story

Sometimes, It Just Ain't That Easy