A few weeks back, I began telling you all about personnel changes at NCR.  (See this and this.) Here is my next installment in that series. I am very happy to announce that Caitlin Hendel is joining us as managing editor. I am also very relieved to make this announcement. We have been without a managing editor since I became editor a year and a half ago. Hendel started with us July 1. 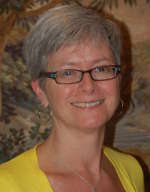 Journalism is in Hendel’s blood. Her grandfather was a journalist, publishing a newspaper in western Kansas. She tells me that she wrote her first story at age 7 and has been a news junkie since the days of Huntley and Brinkley. With a journalism degree from the University of Kansas, she landed at newspapers from Dallas to Kansas City, Mo. In 1997, she moved to Washington, D.C., where she covered the U.S. economy at Bloomberg and the U.S. Congress at CQ Roll Call.

She is also a cradle Catholic, baptized in New York City, educated in grade school and high school in St. Louis (and St. Louis readers will want to know, at Mercy High School -- under the care of the Sisters of Mercy), and married at St. Peter’s Church in Kansas City. “My faith was formed in the early days after the Second Vatican Council, and it continues to grow stronger and deeper with each step of my life,” Hendel said.

“I’m a mom and a wife, a sister and an aunt,” she told me. “Family is so important to us that we’re saying goodbye to the East Coast and returning home to the Midwest.

“I’m blessed to be able to marry my journalist side to my Catholic side here at NCR. These are really good people with a really good mission: journalists covering the Catholic church, telling the whole story while always keeping in mind the teachings of Jesus and the Gospels. In the conference room here hangs a reminder of those we aim to serve, the last being: ‘Those who embrace hope as a way of life and believe in the ability to be agents of change for a better world.’ I’d like to think that describes me as much as it does you.

“St. James tells us to be ‘quick to hear, slow to speak.’ I look forward to hearing from you.”

Welcome to the team, Caitlin. I’m glad you’re with us. She can be reached at chendel@ncronline.org, and you can follow her on Twitter @chendel.

I am pleased to announce the recent additions of two directors to the National Catholic Reporter Board of Directors, Steve Miller and Jim Frey.

Miller is from Kansas City, Mo., a graduate of the University of Notre Dame, with a law degree and a theology degree from the South Bend, Ind., institution. He has been active in local marriage preparation programs, the Rite of Christian Initiation of Adults and a sister parish program in El Salvador. He and his wife, Susan, founded Turning Point: The Center for Hope and Healing, to provide additional support to cancer patients.

Frey, who resides with his wife, Mary, in Minneapolis, is president and CEO of the Minneapolis-based Frey Foundation. He received his undergraduate degree from St. John’s University in Collegeville, Minn., and a Juris Doctor degree from William Mitchell College of Law in St. Paul, Minn. Frey has served in a human resource capacity with a variety of organizations. He serves as vice chair of Heading Home Minnesota, a public-private partnership aimed at ending homelessness in the state. He has also served as board chair of St. John’s University, and has been a board member for a variety of for-profit and nonprofit organizations.