Skip to main content
News
This story appears in the Q&As with Vinnie Rotondaro feature series. View the full series. 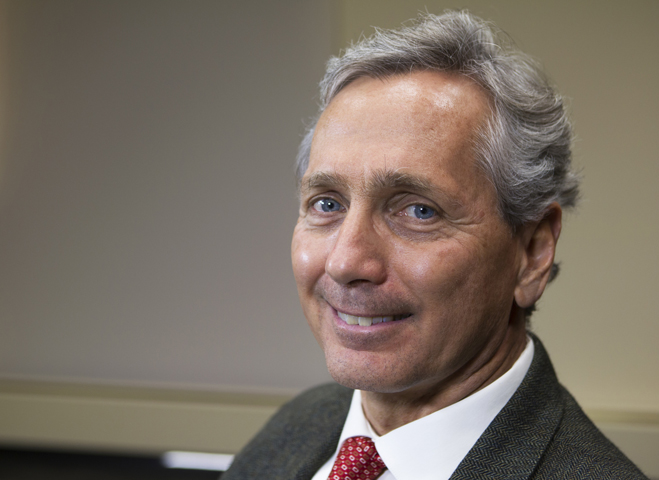 The rhetoric has been heated in the wake of the Paris terrorist attacks. Some are saying we should reject Syrian refugees. Others are calling for war. "Why can't we take out these bastards?" CNN's Jim Acosta asked President Barack Obama.

And then there is presidential candidate and Vermont Sen. Bernie Sanders, who at Saturday's Democratic debate took a very different approach. "I would argue that the disastrous invasion of Iraq -- something that I strongly opposed -- has unraveled the region completely and led to the rise of al-Qaeda and to ISIS," Sanders said, adding, "I don't think any sensible person would disagree that the invasion of Iraq led to the massive level of instability we are seeing right now."

The observation complicates the question: How should the U.S. respond to ISIS? Are we partly to blame? NCR asked just war theory expert Gerard Powers, professor of the practice of Catholic peacebuilding at the Kroc Institute at University of Notre Dame, for his thoughts. His answers have been edited for length and clarity.

NCR: Some are saying we should go to war with ISIS. Meanwhile, Sen. Bernie Sanders is pumping the brakes, saying that we can't forget how all of this came about. What do you think about this argument?

Powers: Well, I agree. I think the U.S. faces a serious moral conundrum. U.S. policy suffered a double moral failure. It was immoral to intervene in Iraq in 2003, and, in the years since, the U.S.'s self-serving, misguided, incompetent and sometimes grossly negligent policies have failed the Iraqi people. And that has had consequences for Syria, and the region as a whole, much as the Holy See and other opponents of the war predicted before the U.S. intervened.

Many years, many deaths, many billions of dollars, many missteps later, it is easy to say the U.S. has done all that it can do to wash its hands of the problem. Let Iraq and Syria be torn apart by their ancient hatreds. But that would be shirking our moral obligation, because the United States became, voluntarily, very much a part of those ancient hatreds. So I think the argument leads to a strong sense of moral responsibility to do something to address the problem.

The problem is, of course, what do we do? We have a right and duty to address the problem, but we don't have the right and duty to do it in a stupid or ineffective way. And we have tried the quick-fix military solutions, which have been justified by the best case scenarios of the good that could be achieved -- peace, freedom and democracy for Iraq and the region, and similarly in Afghanistan. But that approach lacks the realism that is essential to any serious ethic of military intervention. The past few interventions helped create the current problem.

How would just war theory approach this situation?

If you want to put it in just war terms, our effectively helping to create the problem, that just reinforces the sense that there is just cause, both a right and a duty to act against ISIS, including limited military force. Pope Francis said that in August 2014 after the U.S. starting bombing in Iraq. He said, "In these cases where there is an unjust aggression, I can only say that it is licit to stop the unjust aggressor."

I think there's clearly just cause to act with military force. But in order to do it we have to be really clear about the nature of the problem we are dealing with. One way to frame it is countering terrorism, especially since the terrorism in Beirut and the Russian airplane attack. But even then, a good part of it is home grown, and if it is home grown terrorism then I suppose that is more of a terrorism-as-crime approach, which is to deal with it with intelligence policing and ultimately to deal with the deep-seated problems of the marginalized and radicalized minorities in a lot of western Europe.

But then there's ISIS, and ISIS is a complicated phenomenon. It has some holy warriors with a medieval, apocalyptic agenda. But it also has very secularized officials who used to run in high positions in Saddam Hussein's regime. So it's not a monolithic entity, and that suggests you can't deal with it as a monolithic thing.

But the other way to look at it, and this is the way the church has mainly been looking at it, is the problem of humanitarian intervention and the responsibility to protect. You basically have one and a half failed states. Iraq is a very repressive regime with respect to the Sunnis. And obviously you have something comparable to genocide and mass killings and the like going on, and the international community has the right and duty to react. That's a different way of framing it, and I think that's the primary way that it should be framed.

How should the U.S. proceed?

I think there's a serious question about legitimate authority. … I think legitimate authority requires that we get congressional approval for whatever major new actions we take, especially military action, and not just let the president act on his authority alone. Congress has to take its own responsibility seriously and quit hiding behind the administration on this.

Do you think we will have that prudent approach, or do you worry?

I'm not a political analyst. I don't pretend to know what Congress is going to do, or what the administration is going to. But my prudential moral judgment is that this is a moral requirement. We've been involved in the two longest wars in our history. We know the nature of the problems that we've gotten ourselves into, and so we have to have a full debate and broad consensus in the country before we enter back into anything that might look like Afghanistan or Iraq in 2003.

*Some of the words in this interview have been changed for a more accurate quote.