'Les Misérables' a fusion of heaven and earth, sight and sound 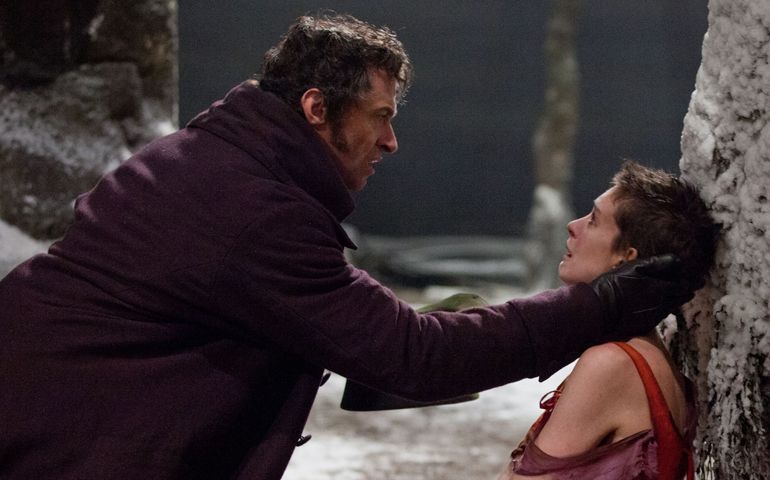 Millions of people have seen the musical "Les Misérables" since the English version premiered in London in 1985 and New York in 1987. Countless others have read the original 1862 novel by Victor Hugo or seen the more than 70 film adaptations in 15 languages. (My personal favorites are the 1978 British telefilm starring Richard Jordan and the 1998 feature film with Liam Neeson, both playing Jean Valjean.)

The tale of the suffering poor of France in the years following the French Revolution (1787-1799) is told through the story of Jean Valjean (Hugh Jackman). As a young man, he stole bread for his sister's family and is condemned to the prison at Toulon under hard labor for 19 years. Inspector Javert (Russell Crowe) only believes in the law -- right or wrong -- not justice. He tells Valjean he must report monthly or his parole will be revoked. Valjean, angry at his lot in life, is given shelter by a bishop, but Valjean steals the bishop's silver. The police catch Valjean, but the bishop pretends he gave the man the silver as a gift. Valjean is stunned by the bishop's mercy.

Valjean skips parole and becomes a wealthy factory owner and mayor of a town. There is trouble among the women in the factory, and Valjean tells the lecherous foreman to sort it out. The foreman casts out the single mother Fantine (Anne Hathaway), who supports an illegitimate daughter, Cosette (Isabelle Allen/Amanda Seyfried), who lives with innkeepers (Sacha Baron Cohen, Helena Bonham Carter) of dubious repute. Javert is posted to the town and thinks he recognizes Valjean, whom he is determined to recapture. He confesses this to Valjean because he believes the real Valjean is being condemned by the court. Valjean cannot let this happen, and testifies in court. He promises the dying Fantine he will care for Cosette, then collects her from the inn and flees to Paris. With Javert on his heels, he takes refuge in a convent, where he and Cosette live for several years.

Students in Paris revive the revolution to unseat the monarchy. Marius (Eddie Redmayne), who has rejected his family's status and wealth, is deeply involved, and one day he and Cosette see each other and fall in love, much to the dismay of Éponine (Samantha Barks), daughter of the infamous innkeepers, who now live in Paris. She loves Marius, who has rooms with her parents. Javert reappears as well; the revolutionaries give Valjean a chance to kill him, but Valjean shows mercy. The barricade is overcome, and during the battle, Valjean saves Marius by dragging him through sewers.

This is neither the end of the story nor the end of the film, which is almost three hours long. I found "The Hobbit" very slow-going indeed, but I did not look at my watch once during director Tom Hooper's compelling musical "Les Misérables."

In 1992, I had the opportunity to see "Les Misérables" on Broadway with my sister and 10-year-old niece. Our seats were the highest and furthest from the stage, and though we could hear well, we were too far away to see what the performers looked like or to note their expressions. Hooper has changed all that by using intimate camera close-ups and recording the singing live. Actors sang with an earpiece with a musician playing piano; the orchestra was added afterward. This means the actors dictated the pace, and their emotions commanded their expressions and performance. There is a startling tension at work between the camera and the actors' faces and voices that completely and effectively draws in the audience.

When I watched "The Hobbit," I was distracted by the highly articulated set designs and always aware of the special effects; in "Les Misérables," there is a stage-like quality to some of the settings, but they never distract or impede the cinema experience. I admit to being distracted just a little by the detail paid to the actors' teeth; none were white and some seemed stained, though some might attribute this to the ill-famed British dental service.

Hugh Jackman said in an interview that he was born to play Jean Valjean -- or, at least, something to that effect. He had to lose weight, as did Hathaway, and the physicality of the role must have been challenging in the extreme. But even more convincing are the emotional peaks and valleys the moral dilemmas drive him to as Valjean. Anne Hathaway's Fantine is tragic, and the oppression of women by men and other women is starkly communicated. Crowe's Javert is competent and his less-than-polished voice works because Javert is so greatly flawed. The performance that impressed me the most, however, was Samantha Barks' Éponine. Her love and loss will break your heart. Eddie Redmayne's tenor is unblemished, a sign that his Marius, and Amanda Seyfried's ethereal soprano Cosette, will face a smooth future, filled with the light of faith and love.

Sacha Baron Cohen and Helena Bonham Carter are unlikable ne'er-do-well innkeepers, but they have their role to play in tying up the story lines. Besides, they provide the only humor in a story of desperate hope.

In the context of these days following the shootings at Sandy Hook Elementary School in Newtown, Conn., the fighting at the barricade may be overwhelming to some, especially when the streetwise young Gavroche (Daniel Huddlestone) is shot not once, but twice. He comes on the scene for so short a time but quickly wins over the revolutionaries and the audience. When he is laid out with the dead beside his sister, Éponine, you may feel your sorrow has nowhere else to go.

Listen to the lyrics of the final song at the barricade; they are about putting down plowshares and living in mercy and peace.

"Les Misérables" is moving and inspiring. It is a prayer, the Gospels brought to life; it is the Creed and sacraments lived. Mercy and truth meet. The screenplay by William Nicholson is faithful to the story (as told and developed by at least five others); it is deeply Christian and points to a world that can be if we so choose. It is a heartbreaking, deeply felt tale of human anguish, brought about by other humans, rising from the earth to God, seeking the justice of love.

"Les Misérables" is a fusion of heaven and earth, sight and sound like no other.

Culture | 'Les Misérables' a fusion of heaven and earth, sight and sound

For Edward Herrmann, the worlds of faith and acting were as one