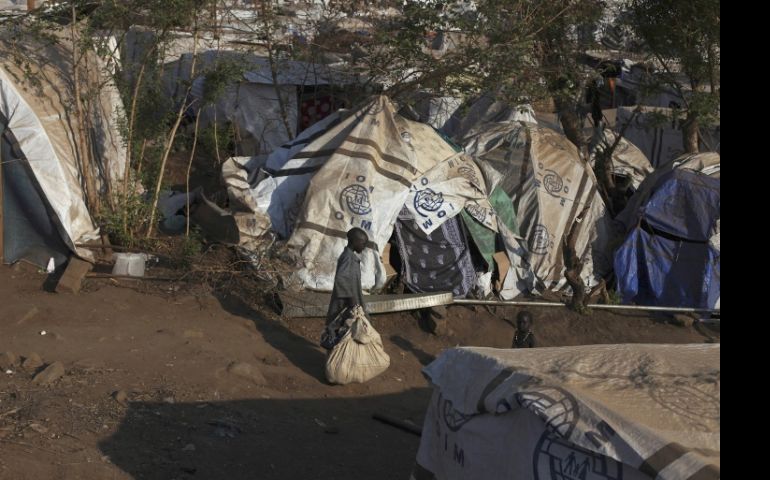 Children walk past tents in one of the two U.N. mission compounds that are holding displaced people in Juba, South Sudan, Jan. 27. (CNS photo/Andreea Campeanu, Reuters)
This article appears in the Letters from South Sudan feature series. View the full series.

Aljazeera published a story this week, “Frontline Nuns,” profiling religious aid workers from Solidarity with South Sudan who are serving in areas of war while facing realities of their own safety.

Once again, Firman paints a realistic picture of the complexity of ethnic and political violence present while courageous men and women, who are both natives of South Sudan and aid workers, continue to work for peace and protect vulnerable people.

It has been a troubled time in South Sudan since violence erupted in Juba, the capital, on December 15 last year. Order was quickly restored in Juba but not before the violence spread away from the capital and initiated terrible death and destruction in some parts of the country.

There is no doubt that this is the worst development since the years of war ended in early 2005. This time there is no ‘enemy’ to fight, but South Sudanese have created enemies as South Sudanese have fought against other South Sudanese. All are losers: there can be no winner. Tens of thousands of deaths, looting and destruction have been bad enough – but the attacking of vulnerable civilians taking refuge in churches and U.N. bases and the deliberate slaughter of innocent people seeking medical assistance in hospital has simply been dreadful. Wide divisions have been opened up, largely along ethnic lines, as former friends have been forced into enmity by the self-interested actions of some of the leaders. Unfortunately, as I heard one bishop lament, ‘In this country, some place more value on cows than on people!’

In the midst of sifting through a considerable quantity of misinformation and disinformation as well as factual reporting, I have been greatly surprised to see the amount of support Riek Machar has been receiving from unexpected quarters. Although there is a great will for peace among the people I meet, there are no signs of an early peace. There seem to be vested interests at play behind the scenes with no wish to end to the conflict but it is hard to fathom what the hidden agenda might be. I think the situation can only be assessed as ‘unstable’ at present.

This is the seventh installment of Letters from South Sudan. We will continue share letters with NCR readers, giving a fuller picture of the complexities of political violence and hopes for peace.