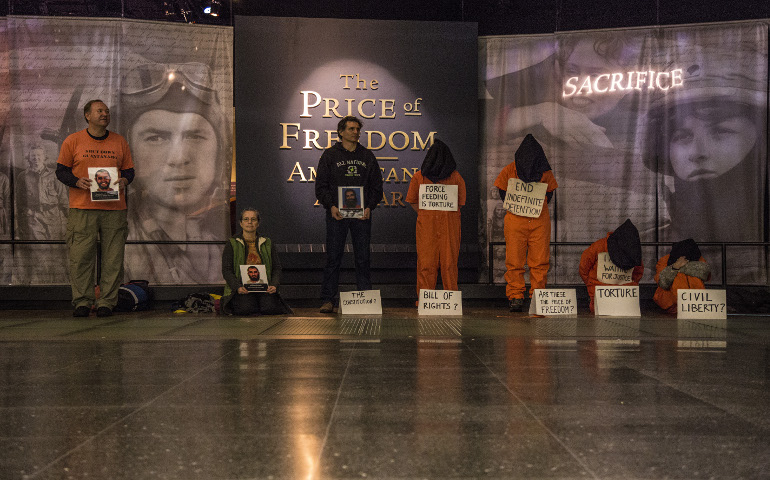 Two exhibits that lasted for mere hours appeared at the National Museum of American History, Washington, D.C., on Jan. 11. Titled, “Make Guantanamo History,” they consisted of 150 activists, some singing, others lecturing, many simply witnessing, as well as a small number silently standing in orange jumpsuits and black hoods.

Jan. 11 marks the 12th anniversary of the Guantanamo Bay detention camp, which Obama had promised to close back in 2008. A total of 779 men and children have been held at Guantanamo, and an interactive chart of their names, reason for capture and even some of their faces can be accessed here. Currently 155 prisoners remain at Guantanamo, with 77 having been cleared for release, according to the Los Angeles Times.

Starting on Guantanamo’s fifth anniversary, the national activist group Witness Against Torture began converging on Washington, D.C., the week of Jan. 11. They commit to a water-only fast, and day after day they vigil around the nation’s capital wearing orange jumpsuits and black hoods – the infamous ensemble of Guantanamo detainees.

This year, Witness Against Torture decided to create living Guantanamo exhibits at the National Museum of American History because the museum “lacks the history of the last 12 years and the so-called global war on terror,” Carmen Trotta, New York Catholic Worker and long-time member of Witness Against Torture, told NCR.

“We didn’t plan it out as well as it worked,” Trotta noted.

He explained how the majority of the activists initially gathered in the museum’s large atrium, as well as the atrium’s multiple balconies, and simply milled about like tourists. A small group of activists were sent up to the third floor of the museum to distract security. They planned to stand in stress positions (hands behind their back and heads down, either standing or kneeling), wearing orange jumpsuits and hoods, and holding signs in front of the exhibit, “The Price of Freedom: Americans at War.”

Erica Brock, a New York Catholic Worker, was one of those activists, and she wrote about the experience in a Witness Against Torture newsletter:

My hands were shaking as I tried to pin my sign “Force Feeding is Torture” onto the front of my orange jumpsuit. Helen, Becky, Marie and I were all shaking pinning signs as we stood together in a bathroom stall on the third floor of the National Museum of American History. We had gotten the go ahead earlier … and now were getting ready to make our exit, hooded, with heads down and hands behind our backs to become a new exhibit in “The Price of Freedom: Americans at War.” Marie led us; I was the last in line. We walked out breathless and with our hearts beating rapidly and took our places in the exhibit to help make Guantanamo history.

Trotta, wearing street clothes, stood in front of the tableau and began speaking out about the history of Guantanamo. As expected, museum security were immediately alerted.

“There were signs of panic from security. When security came over the first thing they did was take off [the activists’] hoods. Then there was an uproar from the atrium. Security went running off,” Trotta said.

The distraction had worked. The “uproar” Trotta described was from the large group of activists downstairs in the atrium, the place museum-goers must walk through if they enter from the National Mall.

Posing in a similar tableau as the third floor group, the atrium activists took their places near the entrance to the “Star-Spangled Banner” gallery, as the larger group began a “mic check.” Also known as a “human microphone,” this tactic was popularized by the Occupy movement – the speaker says a few words and the listeners repeat the words so everyone can hear. In the echoing atrium, the activists’ words carried throughout the museum.

At this point, security decided to shut down the entire "Price of Freedom" exhibit on the third floor. Trotta explained that what security didn’t realize as they were “shooing people from the exhibit” was that “the only place to send people was the atrium!”

In the atrium, the activists continued to speak out against Guantanamo using the “mic check” style, they sang songs that were simple enough to join in, and for a brief moment, a large banner that read, “Make Guantanamo History,” was unfurled from one of the atrium balconies before security ripped it down. Their exhibit in the atrium lasted for over two hours, as there were too many people for security to contain.

Meanwhile, the police were sent to speak with the small group of activists on the third floor, as closing down the exhibit had not deterred their vigil.

Ted Walker, a member of Jonah House, was at the museum with his family to support the activists. While he was waiting for the third floor to re-open, he spoke with another man who agreed with the activists’ message, but was upset that their protest had closed down the third floor, which his family had wanted to visit. Walker mused, in a Witness Against Torture newsletter,

I couldn’t help but think about the fact that all the men in Guantánamo really want is the same thing that [he] and I wanted, and were able to have: to be with our families.  They have been wanting this for twelve years. And yet they still face indefinite detention. What neither of us could have predicted was that, ten minutes after [the other family] had departed, the museum staff reopened all the exhibitions – allowing our Make Guantánamo History living exhibit to remain in the midst of it all! … In my re-imagining of how our conversation could have gone, I imagine our conversation lasting long enough for us to receive word that the museum was reopened.  I imagine how both our families could have met, shook hands, and then proceeded together up the escalator to the exhibition that [they] wanted to see.

To everyone’s surprise, the decision came from the head of security to re-open the third floor exhibit without removing the Guantanamo exhibit. He made them promise to leave when the museum closed, and told them that they could have “no fliers, no banners, no standing on or interfering with exhibits, and voices must be moderate,” Trotta said.

“It was very touching that he did that,” Trotta continued. “I told people that came through the exhibit how proud we were of security.”

The third floor exhibit lasted about three hours. When asked why he thought they were allowed to stay, Trotta responded, “The U.S. literally authorized the torture of people. I think that there’s enough sense that that’s truly, deeply objectionable.”