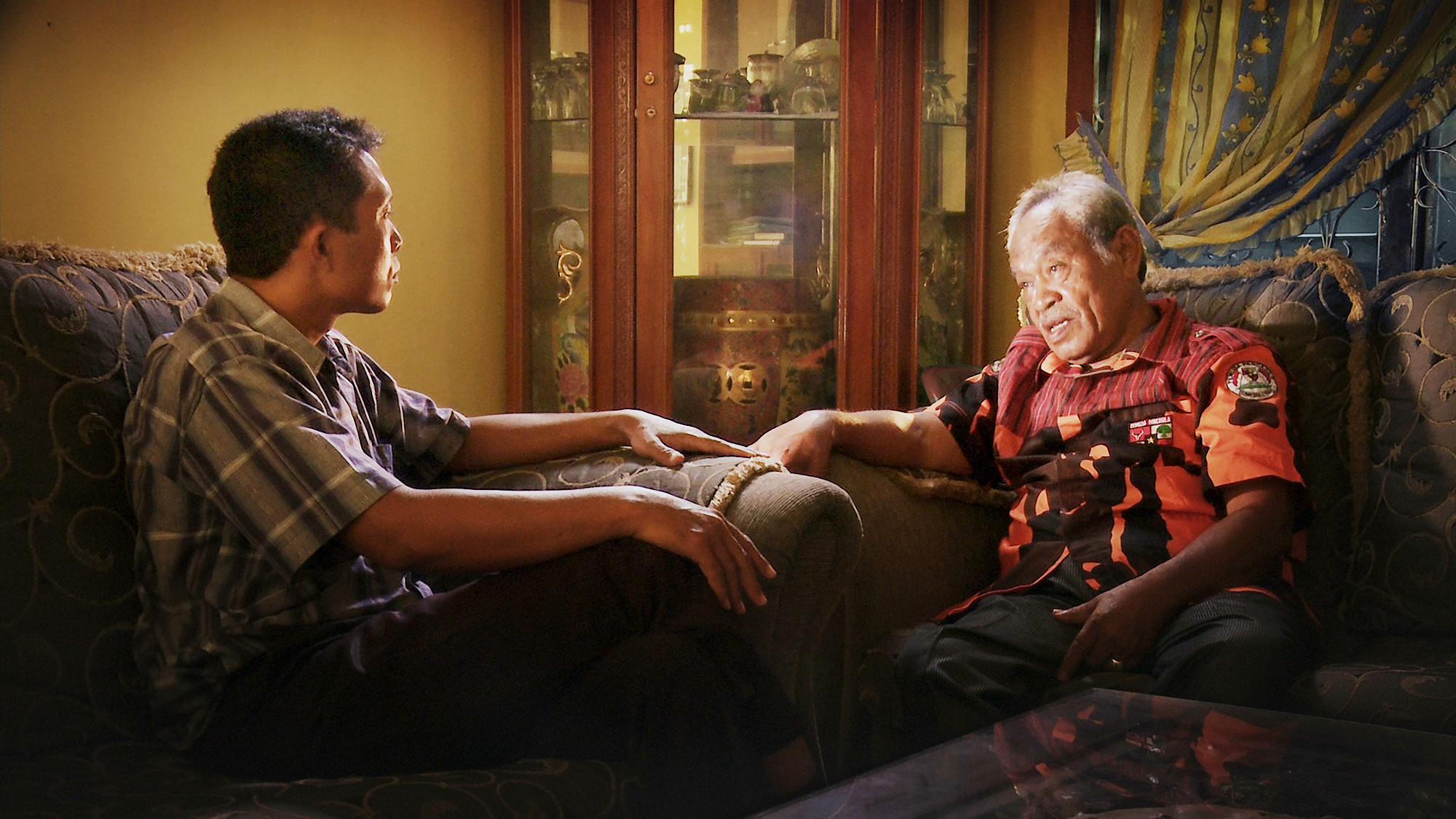 Adi questions Commander Amir Siahaan, one of the death squad leaders responsible for his brother’s death during the Indonesian genocide, in Joshua Oppenheimer’s documentary "The Look of Silence." (Courtesy of Drafthouse Films and Participant Media)

Beginning in October 1965, an anti-Communist purge, rather conveniently instigated by a failed coup, led to the ousting of Indonesia’s first president, Sukarno. This was followed by the U.S.-supported presidency of Maj. Gen. Suharto, who held office for 31 years. It is estimated that the purge, which lasted into early 1966 and was carried out by local militias under the direction of local and regional leaders, resulted in the brutal torture and deaths of at least 500,000 people.

Many of the people who carried out these atrocities are still in positions of power today. The history and legacy of these killers and the culture of fear still dominant in the most traumatized parts of Indonesia are the subject of director/writer Joshua Oppenheimer’s two documentaries: the 2014 Oscar-nominated film “The Act of Killing” and its companion, “The Look of Silence.” Oppenheimer's latest film won the Grand Jury Prize at the Venice Film Festival last September and opens July 17 in Los Angeles with a nationwide roll out to follow.

Oppenheimer, an American living and working in Denmark, told journalists at a press day July 10 in Los Angeles that he first learned about the mass killings when he went to North Sumatra in 2001 to assist palm oil plantation workers in making a film about their efforts to unionize. They had a strong union until 1965 when many of the members, the current workers’ own family members, were labeled Communist sympathizers and murdered.

After Suharto's forced resignation in 1998, the workers wanted to try again to unionize since working conditions were deplorable. Oppenheimer discovered that fear was the biggest challenge to creating a union because the corporation would hire paramilitary thugs to threaten and attack the people. The people knew that the killers in the 1965-1966 massacres remained at liberty and some of them and their henchmen held government office.

After the 2003 release of “The Globalization Tapes,” Oppenheimer and his team were asked by the survivors to come back and make a film about the source of their fear, he said, “a film about what it's like for survivors to live surrounded by the men who murdered their loved ones, men still in positions of power.”

Between 2003–2005, Oppenheimer filmed every perpetrator he could find, more than 41 of them across North Sumatra, “from death squad to death squad, up the chain of command, from the countryside to the city.”

“The Act of Killing” released in September 2012 (February 2014 in U.S.), what the filmmaker calls “an exposé of a present-day regime of fear.” Last year, I wrote this about the film: “Incredible doc about Indonesia's gangster death squads of 1965 that helped overturn the government. Decades later, they revisit killing sites and boast about their deeds, but the exercise causes them to reflect. No one was ever held accountable for these human rights offenses. Not an easy watch.”

“The Look of Silence” is a visceral, heartbreaking story of one of the victims of the death squads, a young man named Ramli. When Oppenheimer met his parents and younger brother Adi, born after the killings, the filmmaker realized that Ramli was evidence for the family and others that the nightmare had been real. Adi’s parents, now elderly (his father is about 100-years old in the film and suffering from Alzheimer’s and blindness), were designated “politically unclean” and impoverished by local officials and traumatized by the events of 1965 -- especially their son Ramli’s murder.

In 2010, Oppenheimer was finishing “The Act of Killing” when he gave a video camera to Adi, now an optometrist who travels from home to home fitting people for glasses. Months later, when Oppenheimer returned to make what would become “The Look of Silence” Adi told him he wanted to meet the men who had murdered his brother. The director refused, knowing how dangerous this would be. Adi then showed him footage he had shot of his elderly father crawling from room to room and unable to recognize his family for the first time. Adi explained that it was at that moment he realized that it was too late for his father to heal from the atrocities; that he would die from his fear. With this in mind, they proceeded knowing that the film could honor his father.

“The Look of Silence” is a quiet film with a steady, persistent gaze, whether from Adi or the cameraman. As Adi, with superhuman empathy and gentility confronts the perpetrators, he hopes and waits for some sign of regret, an apology.

But none ever comes. The grown children of one perpetrator become angry, and one daughter becomes embarrassed for what her father had done -- something she never learned about at home or at school. History is, indeed, written by the victors in Indonesia.

The U.S. and Britain were heavily invested in the 1965-1966 events as one clip from a major network news story at the time shows in “The Look of Silence.” In another scene, where two of the killers reenact how they murdered people, one of them says that the U.S. should send them on a vacation to America since they did what the Americans taught them to do: to hate the Communists.

There is a certain visual poetry to the film, and as I listened to Oppenheimer describe his film and experiences, I was struck by his facility with language and his artistic vision, even while talking about the killing fields of memories that his film exposes. I asked him how he could deal personally with the outrage that these events must have engendered in him, and he said after a brief pause, “By making these films.” He hopes that truth and reconciliation might be a consequence of these works. Oppenheimer admitted that he, his small crew and Adi had to be ready to escape when the interviews became tense. The filmmaker can can no longer enter Indonesia, and Adi, his family and others who assisted have been relocated so that they can live in safety.

Who among us even thinks of Indonesia these days? Films such as Peter Weir’s 1982 “The Year of Living Dangerously,” adapted from the novel of the same name, looks at the 1965 coup that started the events in Oppenheimer’s film through the eyes of journalists. Then there’s Elizabeth Gilbert’s 2006 stirring memoir, Eat, Pray, Love, (and forgettable 2010 film) that has her spending four months in Bali, Indonesia.

I remember a CBS News story from 2012 about the vast deforestation of Sumatra and the expansion of palm oil plantations decimating the orangutan population. Some sources say that palm oil is present in about half of U.S. processed foods. But what of the continued working conditions of the people who make the global market place function that started Oppenheimer on his deeply felt journey? Palm oil production is linked to many human rights abuses and has a huge negative impact on the environment because sustainable methods are not in place or used.

The blessing of cinema -- fictional or documentary -- is in its ability to tell the truth about humanity, to shed light on the human condition, to inspire audiences to see, to feel, to act, to respond in some way that goes beyond one’s personal and individual perspective to the community and to the world.

“The Look of Silence” is a blessing, I think, because it brings 50-year old human tragedies from half a world away to our consciousness and makes it current because the fear is still maintained by a powerful few over people who were and are victims. The film engages our consciousness and asks us to send a blessing back in some way; to be aware of the world beyond our borders and above all, to actively care about people we don’t see who suffer to make our lives easier.

A version of this story appeared in the July 31-Aug 13, 2015 print issue under the headline: Film exposes genocide's lingering legacy.