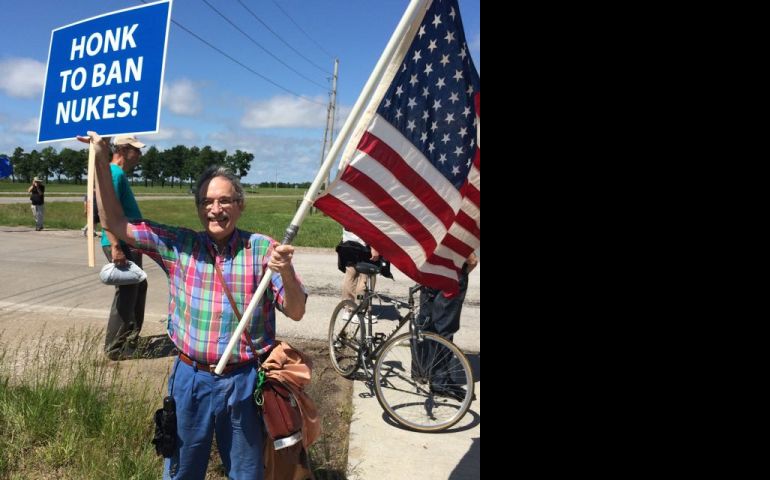 Vern Barnet, Kansas City religious leader and writer, was one of the walkers. (Photos by Tom Fox)

KANSAS CITY, MO – A Memorial Day peace walk here today paid special tribute to more than 150 workers who reportedly have died as a result of cancers and other diseases contracted while working at a now closed and contaminated local nuclear weapons plant.

The Bannister Federal Complex, which produced nuclear weapons for decades and closed last year, has been a focus of local nuclear weapons protesters here for the last half dozen years. With the plant now closed, protesters are focusing on drawing attention to a new plant, which opened here last year, and is intended to replace the old plant. This new plant, located 14 miles south of Kansas City was completed at the cost of nearly $1 billion.

“About 150 workers have died as a result of having worked at the old Kansas City plant or at other locations at the Bannister Federal Complex, and another 250 workers are ill as a result of contaminants there,” said Henry Stoever, chair of the board of PeaceWorks, Kansas City “What day is more fitting to remember these workers than Memorial Day?”

The new plant feeds other US nuclear plants with 85 percent of their non-nuclear weapons parts.

The US is currently spending $350 billion to upgrade its nuclear weapons arsenal over the next ten years; a projected $1 trillion over the next 30 years.

The walk, which drew several dozen protesters, was aimed at highlighting the risks posed not only by their possession and possible use, but also by their production.  The production process exposed thousands of workers to hundreds of toxins, according to Stoever, and left behind a site that will be “polluted into perpetuity.”

A 2011 report by NBC Action News Kansas City  listed 154 persons whose families said they had died from toxins at the complex, plus about 250 others injured from contaminants there.

Passing in front of the new nuclear plant near the end of the three-and-a-half hour walk, Stoever said he felt gratified to see more than 30 people participating in the protest. “I feel terrible guilt and shame that we have allowed these weapons and plants to be built,” he said. “They are built in our name and with our tax dollars. These weapons must never be used. We need to get a consensus of people to say ‘remove these weapons; they have no place in society.’ If we are a people of love and truth, then we must act to save ourselves from ourselves.”

Several former nuclear plant workers spoke at the end of the ten-mile trek, talking about their cancers and those of other former employees. They said that the federal government has turned its back on the gravity of their illnesses.

Maurice Copeland, once a supervisor and machinist at the old plant, pleaded with protesters to “walk up” America to the dangers of nuclear weapons. He rhetorically asked why new nuclear weapons must be built when current arsenals can eradicate all life on the planet.  Copeland resigned from his plant job, he said, after realizing the health hazards to him.

One woman said both her parents had worked at the plant and both developed and died from cancers.

Following the speeches, some of the walkers performed a symbolic “die in” to depict, they explained, workers struck down by toxin-related diseases at the old plant.

This was the fourth year Kansas City protesters, carrying flags and signs, walked one of the city’s main arteries on Memorial Day morning, attempting to draw attention to the dangers of nuclear weapons as well as to the dangers the deadly contaminants the construction of these weapons entail.

Stoever noted that Sister of the Holy Child Jesus Megan Rice, who did civil resistance in 2012 at the uranium facility for nuclear weapons in Oak Ridge, TN, was recently asked how she felt upon her release from federal prison. She replied, “As long as one nuclear weapon exists, we are all at risk, we are not free.”

During the protest walk, as protesters walked in front of the new nuclear plant, they “waved goodbye to nuclear weapons.” Their action was part of an international Global Wave 2015 movement begun last month in New York City at the beginning of a 5-year review of the Nuclear Non-Proliferation Treaty.

Fox is NCR Publisher. He can be reached at tfox@ncronline.org and found on Twitter @NCRTomFox.

'It's an all-out war,' Cardinal Parolin says of Russian invasion of Ukraine