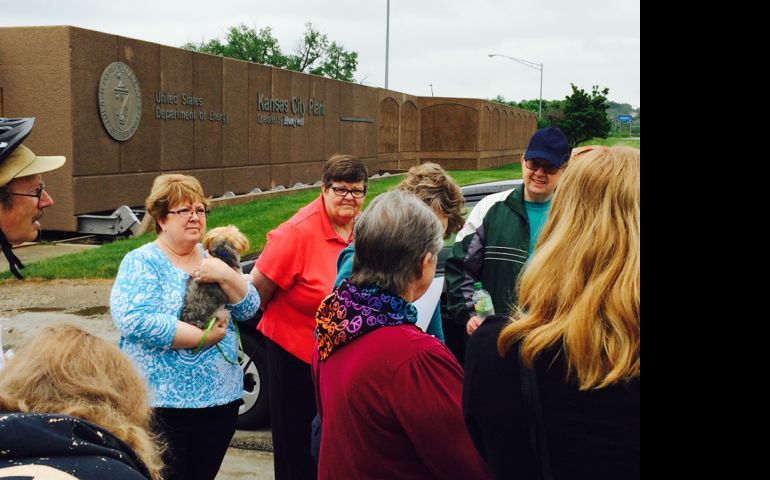 I walked ten miles yesterday with a dozen, spirited peace activists. We trekked from an obsolete, contaminated nuclear weapons assembly plant in Kansas City to a new, clean one, resting on an area the size of 14 football fields. The new weapons plant is being readied at the cost of  $1.2 billion.

In 1984 Orwellian speak, the new facility is called a “National Security Campus," and it highlights its care for health concerns. A sign outside boasts a "smoke free campus."  Reports, meanwhile,  have linked 154 mostly cancer related staff deaths to toxin contamination in the old plant.  The entire area around the old plant is toxic. A government study places the clean up cost at a quarter of  a billion.  A river winds its way a few hundred feet from the plant. Signs warn against fishing. But that doesn't seem to stop some eager sportsmen.

“At least 154 persons have died from contaminants at the old Bannister Federal Complex,” said Henry Stoever, board chair of a local walk sponsoring group, PeaceWorks-KC . “We’re remembering those workers and their families, and others who’ve died from producing nuclear weapons. We’re remembering the more than 200,000 who died from the Hiroshima and Nagasaki bombs. And we’re demanding an end to the outrageous practice of increasing funds to make nuclear weapons while cutting funds for housing and education.”

The Memorial Day walk was the fourth of its kind.  Call it a cry from the Heartland of America.  The activists said they wanted to send out a message that Kansas City residents have not been anesthetized to the threats posed by nuclear weapons, and that deterrence is a form of terrorism.

The soon to close plant, operated by Honeywell for the National Nuclear Security Administration, makes or procures 85 percent of the non-nuclear parts of U.S. nuclear weapons—parts including radar, fuses, firing mechanisms (triggers), guidance systems, tritium containers—parts to turn plutonium and uranium into weapons. Located on the south side of the city since 1949, production is being moved even further south onto lands grazed recently by cattle.

The peace activists, ranging in age from late 20s to mid-70s, talked along the way. Here's to essence of their message to anyone who will listen.

It was on April 5, 2009 President Barack Obama excited an audience in Prague by declaring the U.S. government “will take concrete steps towards a world without nuclear weapons.”  As the only nuclear power to have ever used a nuclear weapon, he said, the United States had a moral responsibility to act.

Fast forward five year: In the budget for fiscal 2015 released in mid-March Obama asked for a substantial increase in funding to support nuclear weapons research and production programs under the Department of Energy’s semi-autonomous National Nuclear Security Administration.

The proposal – from the Nobel prize winning president  -- includes a seven percent increase in the nuclear warhead budget from $7.7 billion in FY 2014 to $8.3 billion in FY 2015, setting a new record for DOE nuclear weapons spending, exceeding even the Cold War high point in 1985 under President Reagan’s military buildup.

The plan, moreover, is to increase the military budget to  $9.7 billion by FY 2019, 24 percent above FY 2014. A large proportion of these costs are for “modernizing”  warheads and delivery systems.

Among the priorities is the B61 Life Extension Program, designed to extend the life of B61 nuclear bombs by an additional 20 to 30 years. The B61 is a variable yield bomb designed  by high-speed aircraft and streamlined to withstand supersonic flight speeds. The Obama Administration is requesting $634 million, up 20 percent from FY2014, for this program, which has already grown  from an original estimate of $4 billion to more than $10 billion. Currently the Department of Defense spends about $30 billion annually on nuclear weapon delivery systems—by air, land, and sea.

Just as the new plant is a “campus,” the U.S. government claims no new weapons are being built, old ones are just being “modernized.”

Much of what happens inside the Kansas City plant is secret.  It is known, however, the plant is producing new arming, firing, and fusing sets with new “heights of burst” for W76 warheads on Trident submarines.

“If you get burst above the surface of the earth, you get more destruction,” explained Jay Coghlan, Executive Director of Nuclear Watch New Mexico when he spoke in Kansas City earlier this year  “The DOE says, ‘We are the We-Be’s. We be here before you, and we be here after you,’ irrespective of who is president.”

Admitting he’s not an overnight abolitionist, Coghlan said abolishing nuclear weapons has to be done progressively, verifiably. Until extinction, the weapons should be maintained by replacing “limited life components” for safety’s sake.

According to a report, The Trillion Dollar Nuclear Triad: U.S. Strategic Modernization Over the Next Thirty Years, published in January 2014 by the James Martin Center for Nonproliferation Studies, ‘Over the next thirty years, the United States plans to spend approximately $1 trillion maintaining the current arsenal, buying replacement systems, and upgrading existing nuclear bombs and warheads.’

Meanwhile, as the U.S. plows forward building new nuclear weapons, it is demanding that North Korea and Iran give up their nuclear programs.  It is not surprising, therefore, that other nuclear power nations such as Russia, China, England and France are also adopting similar policies to “modernize” their own nuclear weapons.

There is now nearly global consensus that the use of nuclear weapons in any form is a crime against humanity. At the same time, nuclear buildup protesters maintain, the possession of a nuclear deterrent equates to preparation for the use of nuclear weapons and, therefore, is a crime against humanity. This was the argument one of the 1983 U.S. Bishops' Peace Pastoral composers, Bishop Thomas Gumbleton, made at the time. He was a minority voice and the pastoral was published, giving "limited" more support for deterrence as long as concrete steps toward total nuclear disarmament were going forward.

The current “modernization” moves, into the billions of dollars, undercuts the moral premise of "limited" acceptance. However, the bishops have yet to follow through with a condemnation of nuclear deterrence.

And so the peace walkers continue to walk, remembering the dead and asking motorists on Holmes road and Highway 150 to “honk” for peace.  They made it from plant to plant, wiery, in less than four hours. It was muggy. Police and plant security followed and watched the group and were on hand when they arrived at the new plant. All were friendly.

After the walk, the group said some prayers and remembered the dead. Little doubt, they will be back next year. One day, they hope, enough people will stand up, like them, and say "no" to nuclear madness.

Bishop Raymundo Peña dies at 87; was advocate of immigrant rights