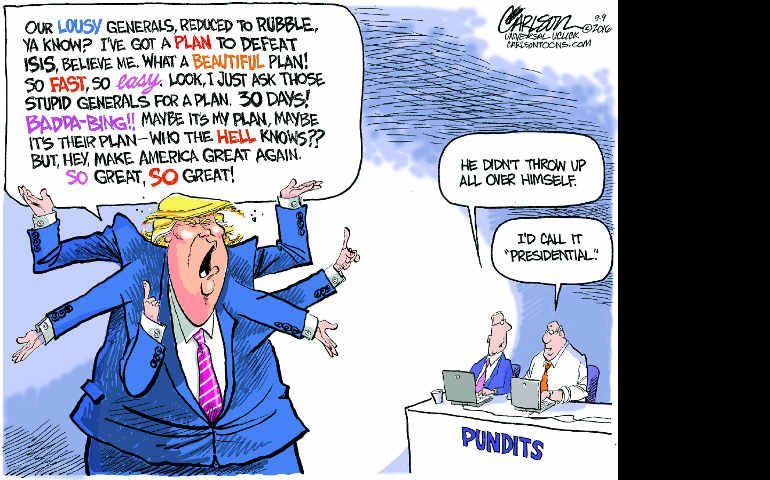 Election 2016: Religious Voters May Lean Republican, But Feel Conflicted About The Candidates Text and Audio.

Election 2016 -- Trump to debate moderators: Don’t even think about fact-checking me. My supporters are watching!

Election 2016 -- The dirty little secret of presidential debates is that they are rarely, if ever, the "game-changing" moments. Living Up to the Hype

Burien, Washington -- Sept. 24: More than 200 people have registered to make a muscular public commitment to "active nonviolence and just peace"

Editorial from the medical journal The Lancet: Time for global political action on antimicrobial resistance

President of a a small Christian college in Lindsborg, Kan., writes: I adopted two biracial kids. Hateful messages showed up on my Kansas town’s sidewalks.

The intense debate over how transparent presidential nominees Hillary Clinton and Donald Trump should be about their health gives rise to another question: What about the health of Supreme Court justices? Supreme Court Justices Won’t Answer Questions About Their Health

Dallas, Pennsylvania -- Misericordia University sposnors talk by a Syrian escaped to America. Diocese of Scranton helped with resettlement. Mr. Allouz said United Nations representatives interviewed his family 15 times while they were in Jordan.

New South Wales, Australia -- A bridge over a stream pieced together with stone from churches, temples and a synagogue, is one man’s powerful gesture of religions unity. Each block of the arch design supports the faith next to it.

Phoenix, Ariz. -- Bishop Thomas J. Olmsted offers third annual State of the Church address. “If we are to be a people of mercy, we need to acknowledge sin and evil. If we are to be peacemakers, we must understand war.”

On this day: The Lord's Supper