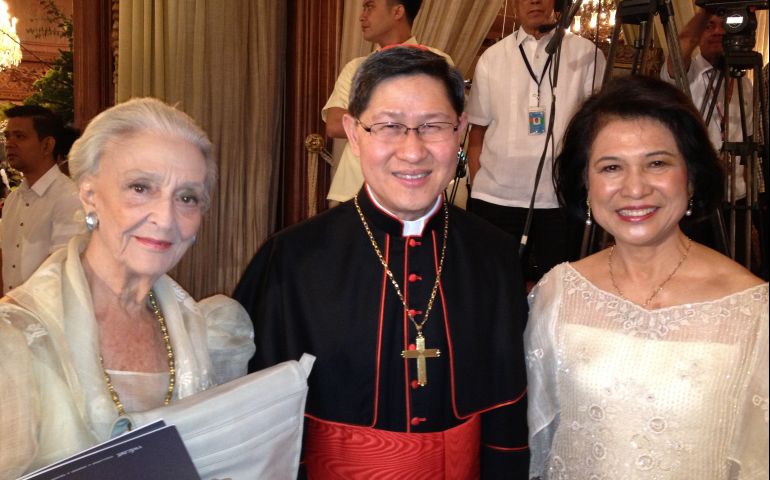 NCR Board member, Loida Nicolas-Lewis, met recently in Manila with its recently appointed archbishop, Cardinal Luis Antonio Tagle. It’s not unusual for Lewis to be traveling her native country. She returns there nearly monthly to look into the many activities she is involved in there.  Loida, a philanthropist, author and lawyer, is the former National Chairwoman of the National Federation of Filipino American Associations, the largest advocacy group for Filipino Americans in the United States. She is also the chair of U.S. Pinoys for Good Governance, an advocacy group pushing for transparent government.

However, here primary concern is staying abreast with the work going on at the college she established in her native Sorsogon City in 1999, a college that allows many local high school and college students, who would otherwise have slim educational opportunities, to obtain education and skills that allow them to become competitive, not only in the Philippines, but throughout the world. Meanwhile, the Lewis college boasts one of the highest graduation rates in the Philippines.

Lewis’ story is an interesting one. She was born and raised in Sorsogon and later traveled to the U.S. for studies.  She met her husband-to-be, Reginald F. Lewis, on a blind date in New York in 1968. Reginald was an industrious and creative man, a successful businessman.  He acquired Beatrice International in December 1987. It was the largest African American-owned company in the United States.  Loida took the helm at the company after Reginald died in 1992, at the age of 50 from brain cancer.  For years she built up the company,  known as TLC Beatrice (the “TLC” was for “The Lewis).

Lewis has been active in a number of political campaigns. She was a supporter of Secretary of State Hillary Clinton’s campaigns, as well as the current Philippine President’s campaign in 2010, when she visited different U.S. states to campaign for then Sen. Benigno Aquino III. She is also an advocate of voter registration and mobilization, encouraging Filipino-Americans to “show power in their numbers.”

Loida has two daughters, one of which, Christina, has written for NCR from Africa and has recently published an ebook, Lonely at the Top.

With Petraeus, echoes of that other warrior David