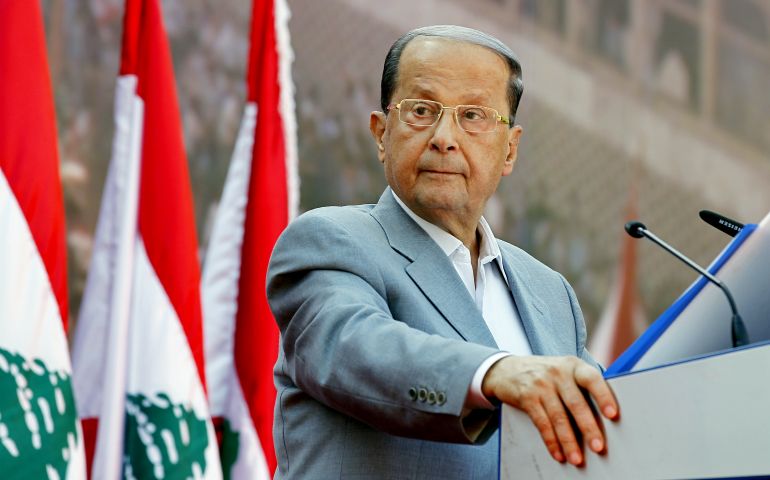 There are more than a few ironies regarding the Oct. 31 election by the Lebanese parliament of former Gen. Michel Aoun, a Maronite Catholic who received his military training in the United States, as the country’s new president. One of the most striking is his shifting allegiances and the inconsistencies of U.S. policy toward Lebanon.

Aoun’s political party, known as the Free Patriotic Movement, is the most popular Christian-led political group in the country, surpassing the once-dominant far-right-wing Phalangists. Aoun’s party is aligned with the March 8 Alliance, one of the two main political blocs in the country, which includes leftists and Arab nationalists, as well as Hezbollah, the Iranian-backed radical Shiite group.

As a result, both The Washington Post and The New York Times announced the election of the “Hezbollah ally” to the presidency and The Guardian referred to him as “a staunch ally of Iran.”

In 2007, former Rep. Gary Ackerman, D-N.Y., when he was ranking member of the Middle East Subcommittee of the House Foreign Affairs Committee, accused Aoun and his supporters of being “agents” and “boot-licking Lebanese proxies” of Syria and Iran, whom he referred to as the “puppet masters pulling on the strings.” He further accused “Aounists” of trying to “take through violence and intimidation what they cannot achieve at the ballot box.”

In reality, Aoun has become president last month through a constitutional process by a democratically elected parliament. This was not the case back in 1988 when he led a military regime, one of two rival governments. In October 1990, as the only major obstacle remaining to implementing the Taif Accords, which finally brought an end to that country’s bloody 15-year civil war, he was ousted by Lebanese and Syrian forces. The operation was openly supported by the United States, concerned with Aoun’s then-alliance with Iraqi dictator Saddam Hussein, the only foreign leader who provided Aoun’s regime with unconditional support.

The political climate in Washington soon shifted, however. For example, a 2005 resolution in House of Representatives — with only one dissenting vote in the 435-member body — condemned Syria for “ousting the constitutional government of Prime Minister Michel Aoun.” The year before, Ileana Ros-Lehtinen, R-Fla., had referred to Aoun’s regime as Lebanon’s “last legitimate government,” which “courageously engaged in a war of liberation against Syria.”

In 2003, Aoun was feted by the Foundation for Defense of Democracies — a neoconservative group that had close ties with the George W. Bush administration and included among its leaders Newt Gingrich, James Woolsey, Jack Kemp, and Richard Perle, as well as Democratic Sens. Charles Schumer and Joseph Lieberman. The foundation declared him a champion of freedom and democracy. Aoun was invited to testify before the House International Relations Committee and was praised by Republicans and Democrats alike.

In short, leading politicians in Washington have considered Aoun both a freedom fighter against Syria and a puppet of Syria, as well as an ally of Hussein, an ally of the United States, and an ally of Iran. Whether Aoun’s history of shifting alliances is reflective of an opportunist interested only in power or a pragmatic strategist skillfully navigating the dangerous intricacies of Middle Eastern alliances, it is clear that American politicians have a simplistic view of Lebanese politics and such categorical praise and condemnation does little good.

Indeed, Aoun and his party are not the only Lebanese political actors for whom the United States has offered radically divergent assessments. During the 1970s and 1980s, the United States backed various right-wing militias against the predominantly Druze Progressive Socialist Party. During the 1982-84 U.S. intervention in Lebanon, U.S. forces fought the Socialist militia directly, including launching air and sea bombardments against Druze villages in the Chouf Mountains.

In 2008, when the Progressive Socialist Party was part of a pro-Western coalition, it was defended in a congressional resolution backed by 95 percent of the House, as part of Lebanon’s “legitimate governing coalition” fighting for the country’s sovereignty. Since joining the March 8 coalition, which now dominates the Lebanese parliament, they are being condemned as foreign puppets.

Furthermore, the United States supported Syria’s initial military intervention in Lebanon back in 1976 and supported its military offensive that ousted Aoun in late 1990 and helped consolidate Syria’s political control of the country. The United States became a leading critic of Syria’s domineering role of Lebanon’s government, which continued until a popular nonviolent uprising during the spring of 2005 forced a Syrian withdrawal from the country.

In 2007, as part of a U.S. policy to support hardline Sunni fundamentalist groups as a counterweight to the growth of radical Shiite movements in Iraq and Lebanon, Lebanese parliamentary majority leader Saad Hariri provided amnesty and released radical Salafi militants from jail. Militants began causing problems in the northern city of Tripoli from a base in a Palestinian refugee camp, however, and the U.S. then backed a bloody Lebanese army crackdown.

It would be an understatement to say that Lebanese politics is extremely complex. One would think, then, that with a history like this, Washington would think twice before going on record in support of specific politicians and factions in Lebanon’s confusing, messy, and violent political environment.