Not one, but two Jesuit masters, the brothers Eagan 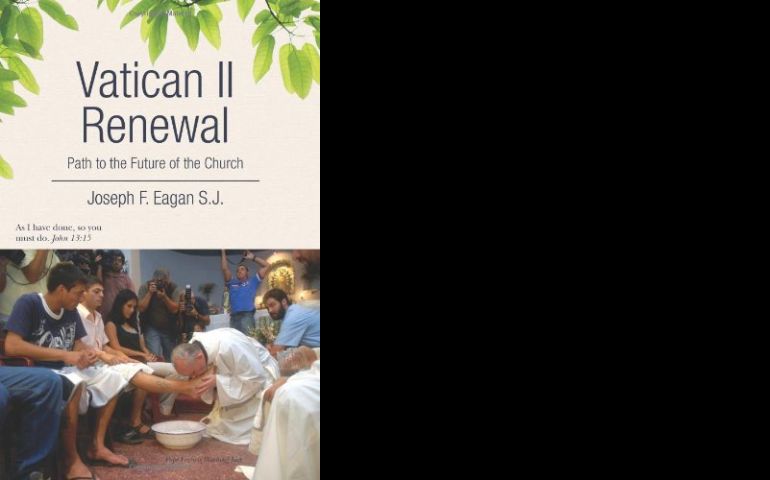 I’ve mingled with many Jesuits in my life. From the time I was a very young boy until now, they’ve helped nourish my life journey. For this I consider myself most fortunate.

My father, Clement, was a professor of neuroanatomy, teaching at Marquette University Medical School in the fifties in Milwaukee. It was not uncommon then for Jesuit priests to visit our home late in the day, take off their jackets, and eat dinner around our kitchen table.

There was little question then where I would go to high school. Of course I had to take an entrance test. However each of the three Fox boys ended up at Marquette High. It was there I first encountered Fr. John Eagan, a bright, sensitive priest, who had a forward-thinking mind and an easy manner.  He headed the school’s Sodality club, a group comprised of students who’d gather occasionally to talk sports and faith. John was a fixture in the school and became a spiritual advisor before I knew there was actually such a thing. “How’s your spiritual life coming along?” he’d ask. I had to ask myself what a “spiritual life” actually was. Eventually I’d come to learn there was an internal guide of sorts and being conscious of it made sense.

John, it seems, was probably doing due diligence for the Society. A good number of my classmates entered upon graduation. I know he was responsible for many Jesuit vocations. I might have disappointed him when I decided that being a Jesuit was not going to be my pathway of choice. I was at that time much too taken by football and some scholarships I was being offered. I eventually headed to Stanford University.  However, I stayed in touch with John over the years, writing him regularly from Vietnam where I ventured after graduating in 1966.

He invited me back to Marquette High and on several occasions where I spoke to his classes about Vietnam and my experiences working with war refugees. He confided that my letters helped form his own thinking about the war. I was touched to hear him share that. John got more involved in Latin America and the wars the US was pursuing there in the 1980s. He accompanied students to Central America. His interests were global and always expanding. For both our viewpoints, it looked as if US policy planners, as they got deeper into Central American matters, had never learned much needed lessons they should have taken from Vietnam.

John was a quintessential Jesuit, combining a keen mind, a rich spirituality, and passion for justice. He could have taught anywhere, but chose to stay and teach high school students. He had an enormous impact on their lives. I know this from personal experiences.

Sadly John died in 1990 of liver cancer at the age of 62, but not before writing a deeply moving account of his own spiritual journey. Nearly a quarter century later, A Traveler Toward the Dawn remains a powerful account of a man of rich faith who sought God and responded to His challenges.

I missed John. Many did. However, I was fortunate in the years that followed to meet and then get to know his brother, Fr. Joe, a kind of spiritual Jesuit twin, another seeker deeply influenced by Ignatian spirituality. He, like his brother, never accepted the status quo because it always contains injustice and in it rests the challenge for something better, something more.

Joseph – always “Joe” to his friends -- spent recent decades working as a parish priest in the San Francisco Bay area and has always pushed the proverbial envelope. He has been a teacher throughout his life, leading a book club that drew together Catholic lay leaders to read and discuss contemporary church and societal issues.  I spoke in several homes before his group, always finding the conversations stimulating.  Like his brother, Joe has been especially empowered by Vatican II thinking and documents, formative in his own early priestly life. The Eagan brothers have been deeply committed to church renewal throughout their lives, reasoning that greater transparency and justice in the church makes it a more authentic and powerful witness in the world.

After years of research and reflection, Joe recently published a book entitled, Vatican II Renewal, Path to the Future of the Church. The word “prophetic” is often overused in church parlance, but connecting it with this book is fitting. Full of hope and forward-looking, this book offers both a concise and challenging look at the state of contemporary Catholicism. It is an enormously useful teaching tool and a fine entrance ramp for anyone trying to better understand and tie together the major currents of Catholic faith and thought over the past half century. This makes it a thoughtful Christmas gift selection.

Both Eagan brothers, John and Joe, have the ability to infuse the spiritual seamlessly into our ordinary lives.  They have lived on a different plateau and gently beckon us to join them. This is something quite extraordinary – and people who have known them know exactly what I mean.

Recently I received a note from Joe who lives at Camillus Court East, a Jesuit community in Wauwatosa, Wisconsin. “I hit 92 in October,” he wrote. “But thank the Lord I am in good shape.” Yes, I know many of us do thank the Lord for your continued health.

Thank you, John; Thank you, Joe, for the many gifts you have shared with so many over these wondrous and adventurous years.

People | Not one, but two Jesuit masters, the brothers Eagan