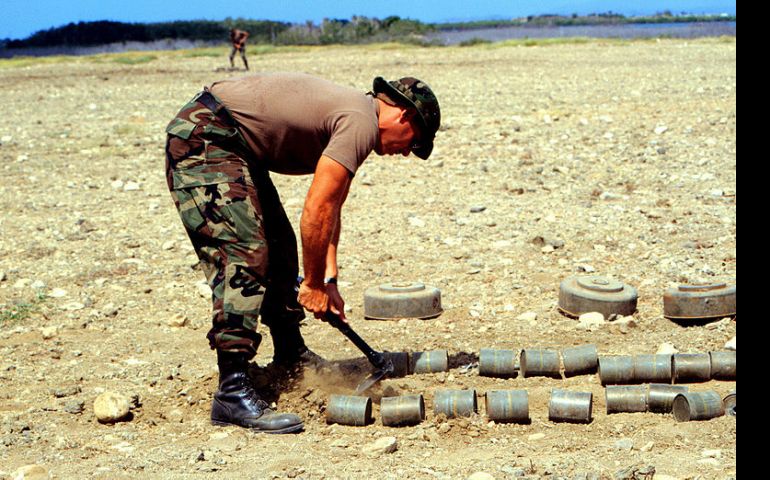 Calling landmines “the weapons of cowards,” Pope Francis expressed his solidarity with those trying to ban them from the earth and especially with victims of such weapons.

His statement came at the end of the Third Review Conference of the International Landmine treaty, a process more formally known as the Ottawa Convention.

The treaty was written up in 1994 and to date 161 nations have signed. The United States has resisted signing the treaty, but announced at the meeting it would no longer add to its landmine stockpile, with an eye to signing the treaty one day.

Anti-landmine advocates have long criticized the U.S. for holding on to its landmines, viewed by many as an indiscriminate weapon, and one that lingers for decades after wars end. .

The treaty bans the use, stockpiling, production and transfer of these anti-personnel mines and calls on signatory nations to help find and destroy them.

Some estimates put the current number of landmines, found in more than 70 nations, at over 10 million. Explosions were killing some 10,000 to 15,000 annually in the 1990s. But as awareness has grown and landmine removal efforts have continued this number has fallen to around 4,000 deaths each year, many of these being children.

Francis, in condemning landmine use, said he felt particularly connected with victims of these devices, according to a Vatican statement.

The Landmine Conference, held in Maputo, Mozambique from June23 to 27, saw participation of over 1,000 representatives of states and international and non-governmental organizations.

The pope’s message was sent by Vatican Secretary of State Cardinal Pietro Parolin. In it, Francis described landmines as “the weapons of cowards,” pointing out that the wounds inflicted by these weapons “remind us that the use of weapons in general represent a defeat for all.”

The Vatican was among the early supporters and signers of the treaty.

Francis praised those who attended the conference for their capacity to make binding decisions that will change the daily life of “so many families, communities, regions and countries who continue to live every day in fear of landmines, in insecurity and poverty”.

Each person, Francis said, wants to live in peace, the opposite of fear. “Anti-personnel mines,” he said, “are subtle because they prolong war and nurture fear even when conflict has ended”.

The pope urged all nations “to preserve the integrity of the [Landmine] convention, to develop and implement it as closely and quickly as possible.”

He called for a world in which “no child should live in fear of landmines!” adding he hopes the treaty might represent a model for other treaties, “in particular for nuclear weapons and other weapons that should not exist”.

“What is the meaning of peace, security and stability if our societies, our communities and our families live in constant fear and destructive hatred?”  he asked in his statement.

“Let us give space to reconciliation, hope, and love that are expressed in the commitment for common good, in international cooperation to help the most vulnerable of our brothers and sisters, in the implementation of policies based on our common dignity”.