'Prosperity gospel' preachers at the inauguration 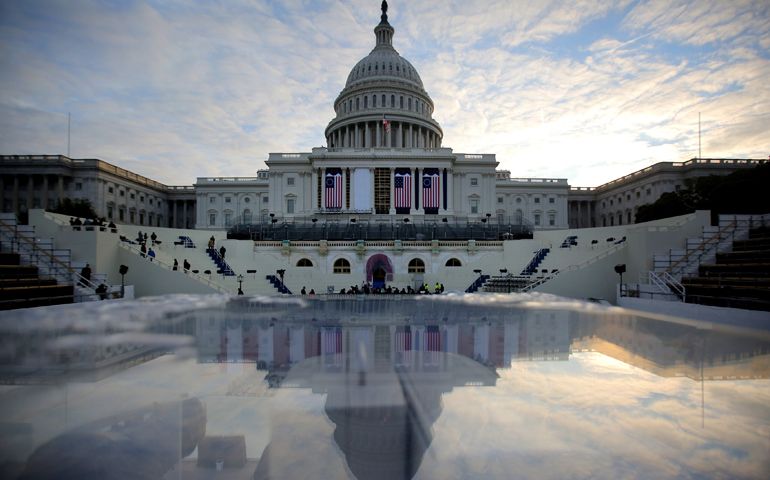 The U.S. Capitol is seen during a Jan. 15 rehearsal for the inauguration ceremony of U.S. President-elect Donald Trump in Washington. (CNS/Carlos Barria, Reuters)

No surprise in this news: Donald Trump has invited at least two preachers of the so-called "prosperity gospel" to offer prayers at his inauguration.

The "prosperity gospel" — which is preached in a few (not most) evangelical churches — basically teaches that God rewards true believers with material wealth. Indeed, material wealth is an exterior sign of God's blessing. No wonder Trump loves them!

The two prosperity preachers slated to offer prayers at the inauguration are: Rev. Paula White, a televangelist who publicly endorsed Trump's candidacy, and Bishop Wayne T. Jackson, an African-American pastor who has preached the prosperity gospel at his Detroit church, Great Faith Ministries International.

Related: "Beware the 'prosperity gospel' of the Trump administration" (Dec. 8, 2016)

Personally, I've never understood this type of teaching because Jesus' own poverty and his love for the poor are so prominent in the Gospels. But there are some quarters where the prosperity gospel is popular, and Donald Trump's White House may be among them.

Of course, it is not surprising that a billionaire like Donald Trump — who, I suspect, has almost no real acquaintance with Scripture — would latch on to this particular slant on the Gospel, even though it is rejected by mainstream Protestants, Catholics and even most evangelicals. It probably makes him think that his wealth is a sign of favor from God as he is sworn in. And with his Cabinet nominations, it looks like he wants people who are similarly "favored" by God, i.e., millionaires and billionaires.

Other religious figures with roles at the inauguration include Rev. Franklin Graham, son of Rev. Billy Graham, who will offer a biblical reading; Rabbi Marvin Hier, the dean and founder of the Simon Wiesenthal Center, Rev. Dr. Samuel Rodriguez, president of the National Hispanic Christian Leadership Conference, who criticized Trump's remarks about immigrants, and then went through a "conversion" of sorts, saying, "I have enjoyed getting to know President-elect Trump and his team over many months."

And finally, there is Cardinal Timothy Dolan, the archbishop of New York. Dolan famously sat between Donald Trump and Hillary Clinton at the Catholic dinner during election season.  During the campaign, he was mostly neutral and spoke out only to criticize Trump's stance on immigration. But Dolan has said he was "honored" to be asked to participate in the inauguration.

But no Muslim imam, no member of the Buddhist or Hindu clergy has been invited to the stage for this event. Not a surprise. After Trump's prejudicial remarks against Muslims, I can easily see why no imam would want to be there even if invited.

But at this moment when resistance to Trump's policy plans is coming together and growing, I wish that Cardinal Dolan would set an example: drop out and encourage resistance, especially when it comes to Trump's plans for immigrants and Muslims. That would be a move that would make Catholics proud. And that would be a real "religious" message for the inauguration!

Francis needs to go beyond his play-it-safe verbiage