Putting a face on deportation efforts 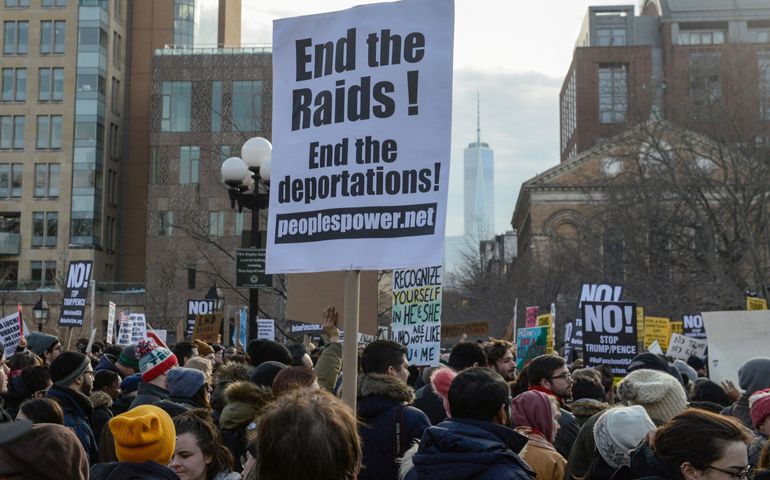 Rodriguez came to the United States five years ago because of the dangers he faced in Honduras. Now the Trump administration is protecting us from the likes of Serbando Rodriguez. After all, he makes his living as a barber and helps teenagers learn how to repair bicycles. He was arrested around 1 a.m. on the morning of Feb. 9. His crime? He illegally reentered the United States after a previous deportation. He feared for his life and we sent him back, and now we are about to send him back again. Clearly the Trump administration is doing a good job of protecting us from dangerous hombres.

Rodricks notes that Trump said his administration was operating like a fine-tuned machine, and he tends to agree. The evidence he sees for that, is the arrest of Rodriguez. It "sounds like a 'fine-tuned' police state," Rodricks remarks.

What is the reason for raids in the middle of the night, and what images of other historical events does it bring to mind? What is wrong with using due process to identify and deport those who need to be deported? Is the goal to intimidate and frighten individuals and families whose only crime was to try to make lives better for themselves and their children? After all, didn't all of us who are immigrants come to this country for the same reason?

The Obama administration had a standard of deporting those who had committed violent felonies. The standard now appears to be that any and all undocumented individuals can be deported, since they are all here illegally.

Fear and hatred are powerful emotions. They do not, however, represent the best of who we are. The history of this country and of the church has highs and lows that can be discouraging, but it is difficult to go wrong if we stick to Gospel values. Jose Gomez, the archbishop of Los Angeles, spoke strongly about the humanity of migrants who continue to be our brothers and sisters. He stated, "In the name of enforcing our laws, we're breaking up families. Punishing kids for the mistakes of their parents."

Robert McElroy, the bishop of San Diego, said we need to be disrupters of unjust policies. He raised his powerful voice to say that we should be disrupters of "those who would seek to send troops into our streets to deport the undocumented, to rip mothers and fathers from their families."

I was fortunate, this past Sunday, to see a film version of the Broadway musical "Allegiance." It was not very successful on Broadway, lasting only four months, but it tells an important story about Japanese internment camps during World War II in the United States. These internment camps were a product of fear and hatred of the unknown. This is something we have seen too often in our country. The musical, which by the way has terrific music and acting, tells the story from the point of view of a family that was interred in such a camp. It shows how even though the family was together, the stresses and injustices of their detention, served to destroy it. Young and old were trying to process how this injustice could happen to them in the land of the free. They each came to personal and different conclusions. They could not bridge the gap among their different points of view and wound up never being reconciled.

Those who espouse family values cannot be unmoved as we watch families being torn apart at the border. One cannot but be upset when we see our country using authoritarian tactics to roundup helpless individuals in order to demonstrate how tough we are.

Many are marching and protesting such actions. These protests show the strength of our democracy. They also show compassion and understanding of what so many of our friends and neighbors are experiencing at this time.

How brave are we that we are so terrified of women and children? We need to do better. We need to be more open to the ideals our country has always stood for but not always embraced. We need to reject the unwarranted fears being incited by a leader who seems unwilling to exercise his essential role as a uniter, and not a divider.

A call to repentance on the 10th anniversary of the U.S. invasion of Iraq

The Chauvin verdict: relief, vindication but not celebration