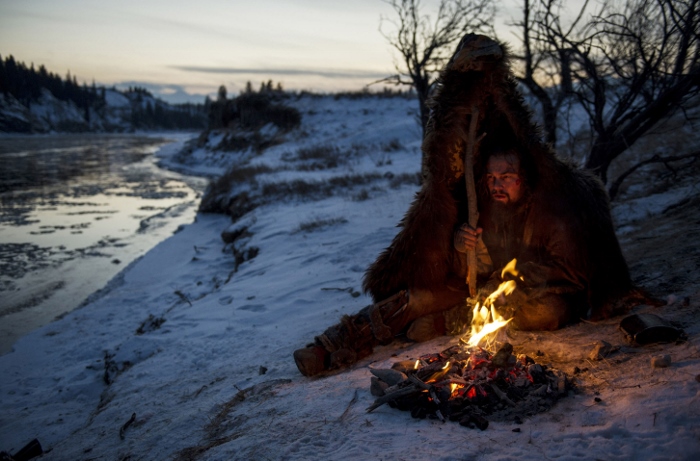 Water, breath, fire, wind. Ice, snow, cold, wet. Pain and more pain. Violence, so much violence. Heartbreak, loneliness. Beauty and cruelty. Betrayal and treachery. Death, so much death. Whispers from beyond yet near and signs of hope. Body and soul, love and sacrifice. The natural and unnatural in a tension that hemorrhages blood and life. This is just a sample of what Alejandro G. Iñárritu's "The Revenant" is about.

In this retelling of the life of the real Hugh Glass (and the explorer and guide Jim Bridger as a young man), writers Iñárritu and Mark L. Smith base their script in part on the novel by Michael Punke and add more characters and plot lines to tell a bigger story. As Glass, Leonardo DiCaprio is brilliant, and Iñárritu continues to explore human connectedness and death as in several of his previous films ("21 Grams" and "Babel.")

In the early 1820s a group of about 45 American trappers are camping in a wilderness forest in what is now Montana. They are a fractious and grim bunch. Their Hugh Glass is accompanied by his grown son, Hawk (Forrest Goodluck), whose murdered mother was a Pawnee Indian. John Fitzgerald (Tom Hardy) is the worst of the lot. An ex-criminal with debts, he is also antisocial and self-serving.

More than 30 men are killed when Indians attack. Their chief Elk Dog (Duane Howard) is searching relentlessly for his daughter Powaqa (Melaw Nakehk'o) whom he believes was kidnapped by trappers. The chief steals many of the pelts and goes to the camp of French trappers to sell them and demand horses to continue his search.

Glass, his son and a few of the men survive. Glass goes ahead to find a trail to the river where they have a boat so as to avoid the Indians. But he is attacked by a mother grizzly bear trying to protect her cub. It is a horrid attack, made worse when Glass wounds the bear. Glass is barely alive when his men find him. Fitzgerald encourages Capt. Andrew Henry (Domnhall Gleeson) to put Glass out of his misery, but Henry offers extra wages to anyone who will stay with Glass until he dies and then bury him. Hawk won't leave his father, and Fitzgerald and young Jim Bridger (Will Poulter) agree to stay behind.

Fitzgerald waits a day or so and tries to suffocate Glass. Then with the almost paralyzed Glass looking on, the trapper stabs Hawk and hides his body. When Bridger comes back to camp he asks about Hawk but only watches as Fitzgerald drags Glass into a grave and partially buries him. Bridger, feeling a pang of conscience, leaves his canteen with Glass.

Miraculously, Glass survives. He drags himself to the body of his son, seeing images of his deceased wife and hearing words of wisdom she would say. Covered with a layer of snow, he takes what he can and drags himself toward the fort 200 miles away where the U.S. trappers are based. When he can finally walk, he steals a horse from the French trappers who perpetrate their own form of evil.

A "revenant" is the spirit or soul of a dead person who appears to the living. From the beginning of the film, when we see flashbacks to the attack that killed Glass' wife, her spirit is with him and their son through the sounds of her voice. Later on, as Glass drags himself across prairies and through forests, she appears to him. The love Glass has for his family is a dominant theme of the film, but the protagonist's grueling journey of revenge for Hawk's death almost overwhelms it.

There are many parallels in the film that strengthen the fabric of the narrative, though ultimately I am not convinced the whole thing hangs together, at least not at first viewing (and I am not sure I could watch it again.) We have two fathers, one searching for his daughter and the other searching for revenge for his murdered son. As Glass becomes involved in Elk Dog's quest, he becomes even more a part of the natural environment -- people and earth -- which is the very real world of the film. There is an existential quality to the film as Glass moves towards his destiny as a human being made of body and spirit -- harmony between heaven and earth.

There is much displacement in the film; for example, there are the stone ruins of a church with Eastern icons preserved behind the altar, a crucifix in the center. Where did this come from? Is it a vision, a memory, a reality? Russian Orthodox missionaries were working in Alaska in the late 18th century and conceivably could have come to Canada and the northern U.S. But more than historical reality perhaps this image is meant not only to signify the Christian religion and spirituality coming into the region but also the jarring juxtaposition or imposition of non-native cultures in North America. Here, that imposition has been overcome by nature with only ruins to remind Glass of his culture. Glass has integrated Native American culture into his own, and in some ways has become as close to indigenous as he can. Who is he now? Who are we as voyeurs on this harrowing journey into the past?

The human devastation caused by French and American fur traders is exceedingly explicit in the film. They took everything they could for profit and moved on to the next opportunity to exploit, whereas Glass, showing skills learned about the native peoples, takes and uses what he needs and offers gratitude -- not unlike what Pope Francis is asking us to do: to be grateful, to restore, to not exploit people and resources for profit.

The cinematography is as relentlessly beautiful as Glass' journey is frozen. In fact, I am still cold. There are nine circles of hell in Dante's Inferno, and the ninth is sheer ice. "The Revenant" is death, purgatory and hell, and each of Dante's circle of hell is somehow represented in the film. The circles practically form an outline for it: limbo at the vestibule of hell, lust, gluttony, greed, anger, heresy, violence, fraud and treachery for humanity and the earth in relation to the Creator. If you see this film, take this checklist with you. There is much thematic depth in the film enhanced by minimal dialogue. (I don't know if the Inferno inspired the writers, but it works.)

Sunrise, sunset, agonizing go the days. There are beautiful shots of the sun breaking through the grandeur of the trees that make one think of God looking over creation, even as nature rains down misery and human inflict horrible suffering on each other. There is an awareness of sacraments (however sacrilegiously Fitzgerald refers to them) and of the sacramental, especially nature's way of revealing inner realities and external truths. Above all is God, day in and day out, God leaving the men free to make choices, with consequences both good and bad, never in between. It is life or death in the wilderness. For Iñárritu, a Catholic, theology means to consider God's created nature interrupted by fallen humanity. His films explore the spaces in between and ask who among these characters is in need of redemption.

No matter how justified Glass feels, there is no way he can rid himself of the heresy of "righteous" revenge passing for justice. He is a good man, make no mistake about it. But he knows better, as does a kind Native American he encounters on his journey, Hikuc (Arthur RedCloud.) Hikuc is looking for his tribe because his family has been slaughtered, too. He tells Glass that revenge is best left to the Creator.

When the moment comes for Glass to take Fitzgerald's life (you already know this is inevitable), the traitor tells him that his death will not bring back Hawk. Glass reflects and leaves Fitzgerald's fate to the oncoming band of Indians. Glass gets his revenge even if he let someone else do the actual deed for him.

The most innocent creature here is the mother bear that is only acting according to her protective instincts. The instincts of men (there are few women in the film; an essay could be written about them) are more complicated and carry moral weight because humans are multidimensional; we are more than cause and effect because we have souls that can reflect upon ourselves reflecting, we can imagine, consider and choose what is right over revenge. True, Glass and Elk Dog are fathers, but revenge won't bring back the dead, and killing is not what will restore what has been damaged. Is Iñárritu making a statement here, that revenge in America is moral? I'm not sure.

While there are spoilers here, I have actually not told you everything. There's plenty more. There is something to be said for a film that evokes lengthy commentary, but it doesn't mean the film really works.

I attended the screening with Sister Marie who belongs to the Penobscot Tribe in Maine. Although she in not familiar with some of the Native American customs in the film, she thought "The Revenant" felt very authentic because survival then was terribly hard and never pretty, especially as non-indigenous conquerors moved in and displaced the first peoples. In one scene between Glass and Hikuc, they are playful and innocent and catch rain on their tongues; Sr. Marie thought this was very Native American.

Although a case could be made that Glass could take solace for his pain from the image of the suffering, crucified Christ in the church ruins that appear to him, Iñárritu went too far, in my opinion, with the gore, moving from art to spectacle (though some would equate these, I think spectacle cheapens). During Glass' struggle with the bear, they fall down a short cliff and the bear lands on top of him. At the press screening I attended, half the audience uttered a rather jagged laugh -- not because it was funny but because it went too far, beyond any suspension of belief. We want filmmakers to be authentic, but I think it is imperative for them to remember what the audience can endure. And coming in at just under three hours, "The Revenant" is too long. (You can take a break when Glass starts crawling across the snow.)

Georgia O'Keefe said somewhere that "true art irritates." Parts of "The Revenant" are artistic and not irritating. Most of the film assaults and goes beyond irritation to physical horror. Is it true art? Finally, the problem of revenge is only explained by the weakness of love rather than heretical justice. But then Iñárritu is no ordinary artist.

Creation is still groaning and in need of grace when Iñárritu is done. It is with me still and I am cold.