There's a meme going around Facebook with Robin Williams in what looks like a hoodie that says: "You're only given a little spark of madness. You mustn't lose it." 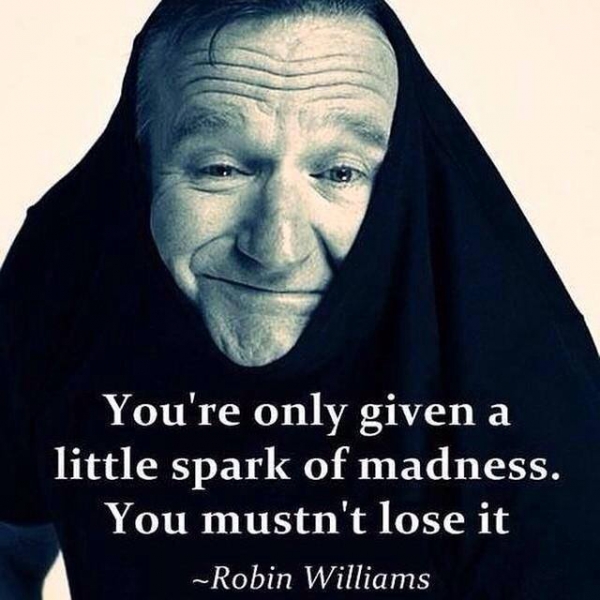 The 63-year-old Oscar-winning actor and comedian died Monday of an "apparent suicide." He is said to have been suffering from a deep depression and has long battled alcohol and drug addiction. As recently as last month, he entered rehab to "fine-tune" his sobriety.

Williams was also a husband and father. He was no saint, but he made us laugh, and maybe for a little while, forget our own troubles.

When Philip Seymour Hoffman died in February of a drug overdose, my neighbors on Facebook -- indeed, the country -- were shocked. But one lady lamented that when an actor who has everything he could ever need or want dies suddenly, the whole world mourns. But when our soldiers die in battle, no one says anything.

It took me a while to understand why this happens. We mourn the sudden, unexpected and tragic deaths of people like Hoffman, Whitney Houston and, now, Williams because we have welcomed them into our homes. They have come with us on vacation with our families when we watched films on airplanes and in hotel rooms; they come to us like magic, as if conjured up by an Internet genie, with a click of the wrist, through Netflix. Their performances make us live through a whole range of emotions and, often, the stories are cathartic. We go to the movies for all kinds of reasons -- when we may be sad, depressed, suffering, or searching for answers -- and there they are.

Music from singers like Houston becomes the soundtrack of our lives, deeply connected to memories. While I wish we would mourn the tragic deaths of our military men and women, especially in needless wars, we don't know them. For many years, we have not even been allowed to see them when their caskets arrive at Dover Air Force Base. We would have welcomed them, even if briefly on the news, if we had been allowed to.

Whatever else depression is, it is pain and suffering. Whatever comedy is, whatever great art is, the sources are often found in pain, conflict and suffering.

Robin Williams made us laugh with his energetic, nonstop comedic blitzes. He was a comedic tornado. He inspired us. He owned his inner madness, the spark of weirdness that made him unique. He celebrated it and shared it until, it seems, he had no more to give.

My prayer today is that each of us discover and own and treasure the spark of madness that can open us to love others, and inspire even one person as we walk our daily path.

As I write this on Monday, it's the Feast of St Clare, patroness of television. Let us pray for actors and all those who tell stories through television that they can hope and trust in the grace of our good God, who loves us.

As my cousin posted on Facebook: We never know what someone is going through; let us, therefore, be kind.

What I wish people knew about depression