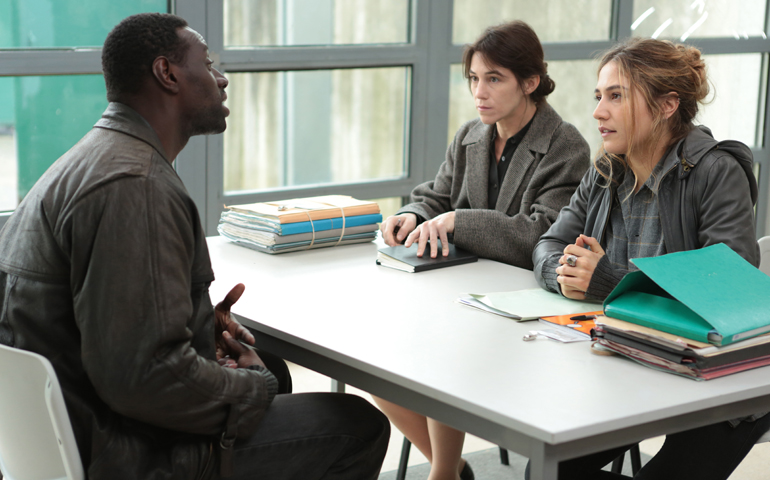 While illegal immigration grabs political headlines in the United States, it is a major global human and social concern for those caught between borders while escaping war and poverty to seek a better life. The 2013 U.S. film "A Better Life" took a sensitive look at a Mexican father and son in Los Angeles. Now, French filmmakers turn a light on their county's reality in the thoroughly engaging film "Samba."

Samba (Omar Sy) is an undocumented immigrant from Senegal who lives with his uncle in Paris and works in a restaurant, hoping to become a professional chef. He is discovered and sent to an immigration center, where he meets his advocates, one of whom is a burned-out businesswoman, Alice (Charlotte Gainsbourg), doing service hours after a breakdown at work. Although her friend warns her ahead of time about relationships with detainees, Alice and Samba are attracted to one another.

When Samba's request for permanent residency is denied, the officials release him from the center and tell him to leave the country. The first thing he does is return to his uncle's flat and adopt the look of a professional businessman to avoid detection. Then he runs into Alice again. She thinks she can still help him as he takes temporary work as a security guard and a window washer, to humorous effect.

As time passes, Alice's colleagues who work to help immigrants fighting deportation form a small community that welcomes Samba. As Samba struggles to find a way to remain in France, Alice struggles to find balance in her personal and professional life.

"Samba" comes from the directing team of Olivier Nakache and Eric Toledano, who gave us the 2011 film "The Intouchables" for which Sy won the Cesar Award for best actor. In this latest film, they continue to explore the world of today's French immigrant underclass with empathy, insight, heart and humor.

"Samba" is a film with many themes: the youthful non-Western culture looking for a future confronting an old European culture that seems inflexible; family (Samba's uncle gives his nephew his own permanent residency card, the most precious thing he has); racial bias and possibilities for relationships between people who at first seem very different but in the end are just lonely people looking for connection, family, friends and love.

I interviewed Sy earlier this week, and he said the plight of immigrants in France is reflected well in the film (both of his parents are immigrants from Africa), as are the possibilities for finding the good in people and discovering ways to get along.

In a world filled with immigrants and refugees who are continually on the move, seeking better lives, "Samba" is a gentle revelation of what it means to be human.

"Samba," which is in French with English subtitles, opens July 24 in Los Angeles; national release will follow.